Today, I feel I’m able to touch my theme in a more tangible way. I spent the first half of my day organizing beers for the Fall Classic. When I got home I did yardwork, cleaning up leaves until I broke the rake.

Now, I’m not much of one for Providence but if you break the rake, it’s time to stop doing yardwork. I cleaned up as best I could, of course: if you have to leave a job undone, you might as well tidy up as much as you can.

All of which is to say that today, more than others, I am taking a rest in a way that I don’t always feel: physical exhaustion.

That’s a pretty different feeling too. There’s an element of feeling entitled, I won’t deny it. “I did a bunch of work today, damnit: I have earned a beer.” That’s a pretty satisfying moment and it’s often very different from mental exhaustion. Mental exhaustion usually speaks to a weariness, at least for me. Instead of earning a beer, instead I feel that I deserve one.

And neither is wrong: I ain’t judging your reason for a beer. Sometimes you have earned it, and sometimes you deserve it and so long as it’s soothing your soul, neither of them are bad.

Today, the beer I deserve is the Yachats 804 Pils. Raw bread dough nose, with a veery tiny flick or that Pilsner funk on the end but it has a strong (for the style) dough flavor that reminds me, pleasantly, of Old Town’s Kolsch. The price point is off putting though: $6 for a pint of Pils is more expensive than I’m ready for.

On the other hand; this is a good beer in a style that isn’t easy to brew correctly. So I don’t feel cheated but I’d be reluctant to order another, given my options.

Saw this short video about ToOl brewery, who makes, among other ethings, freeze dried ale. Now, I have to admit that if you need to add liquor to your freeze-dried concoction in order to call it beer well…aren’t we really breaking the limits of what beer is? As a word to describe a drink, I mean, this really isn’t beer, anymore right?

Well…not exactly but the wastewater is being used to help create lithium-ion batteries. I always love science related stories like this.

I have arrived just in time: the late crowd follows me mere moments after I am seated and I’m lucky to have a place to settle down and write. I’m especially relieved to be at Bailey’s at the moment, because everywhere else I would go would have football on and televisions are detrimental to my focus.

I won’t be here long, though. Today is a brief moment out because I was diagnosed with walking pneumonia a few days ago and the treatment is making me feel nauseous. Still, it’s good to get out of the house for a moment and look at new walls. Plus, Bailey’s is so mellow right now, my inclination is to just kick up my heels and not write at all. I have a beer, I have people to observe and as a bonus, there was a beer festival at Bailey’s yesterday and today is when they bat cleanup on the beers that they didn’t finish out, so there are lots of interesting choices. So many, I’m almost inclined to try another.

Let’s talk about my current selection, the Claim 52: Not Everyone Wants To Be A Butterfly, India Pale Lager. I’ll admit: I bought it because the name was awesome.

It’s very lemony! Nose and finish both emphasizing that quality, with a pleasant sweet note in between it all. It is almost like a beer based lemon drop, without any tart notes. I like it quite a bit! Which is a pleasant surprise because I was not expecting to enjoy it much: IPLs are styles I am wary of.

That’s a pretty good day: having a decent beer and knowing I have other interesting options to choose.

So I’m going to make the hardest choice and go home. Don’t get me wrong, I would like another beer. Heck, even a second Claim 52 would be perfectly acceptable.

As much as I like beer though, I like not coughing and feeling sick more. Having the luxury to not push yourself is one that people should recognize every so often. 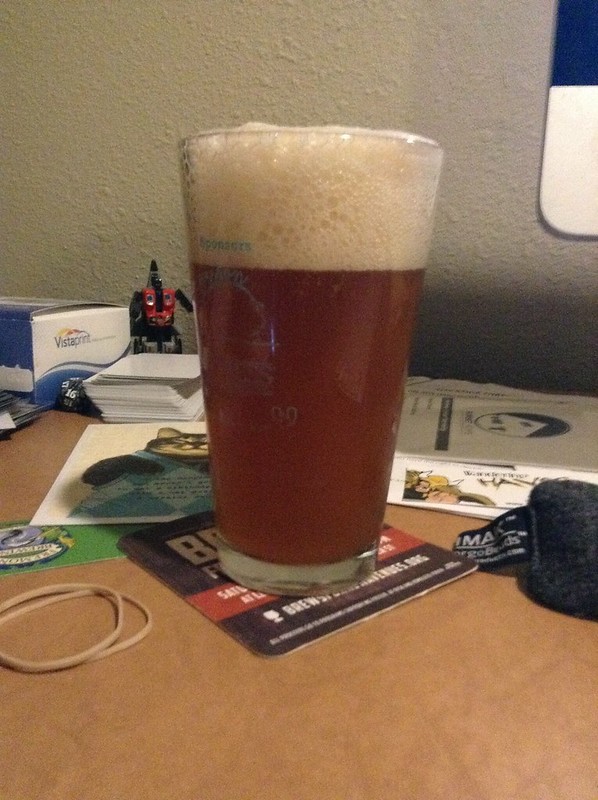 The year of pale ales continues. I’m not sure if this is the eighth time I’ve made a pale but I like the title anyway. Sticking with it.

It’s faintly orange in the nose, adding to the citrus bit so I approve of not-grapefruit there. That orange flavor appears again in the finish but it’s faint: present but not a hammer.

The color is right again; thank you past me for paying attention and getting the extra light malt extract.

It’s actually pretty mild, if you can believe that. Quaffable and easy to put down multiples, I think this iteration of the pale ales I’ve done shows a lot of promise.

A friend of mine sent me a link on craft beer trends for next year. My take on that?

And that the hot take on…uh, another hot take?

I don’t know but:

If I bring a 7/8ths full beer back to the bartender-Fremont’s Field to Ferment, in this instance-and say “I don’t want this, it’s got an awful, dirty taste on the back end and can’t drink it.”

and the bartender samples the beer and says “I can see where you’re coming from.”

Then I believe the response should be to offer me a replacement, not the opportunity to purchase another beer.

So…Rainier did a pale ale. I have thrown myself upon that sword in order to tell you about it.

The Rainier Mountain Ale: nose is sweet, more malt oriented. There’s also a hint of that lager funk that disappears quickly. However, the flavor is…weird. There’s a bitterness on the finish that rises up after a few sips but I’m not getting something to counterbalance it. The midrange is a bit invisible; there just isn’t much there to set this beer up for something good. What is in the midrange: a little bit of banana.

I can’t go for that. Rainier lager I can recommend: it is what it says. This? I feel like it’s a confused statement and it leads me nowhere. Words mean things and pale ales should be hoppy. Somewhere. Somehow.

I thought this was a pretty cool article on the strides women are making in the craft beer field. It has a Portland-centric thread running through it, so I’m a little biased here.

Stone’s Enjoy By 10.31 has super juicy grapefruit flavors, with a surprisingly restrained bitterness on the finish. There’s also some mango that shows up as the beer warms and that addition is definitely a welcome change to the one-dimensional IPAs I’ve had all year. It’s definitely trying to live up to it’s freshness date and the devil in me wants to try some on 11.14, to see how significantly the beer really changes. As it stands though, it’s pretty good-although the scent qualities are quite restrained. I can still put a few of these down if I want, because there’s enough sweetness to keep the whole thing sticky-ed together.

Which is good, because it’s the only beer I get today. I’ve been sick for 4 out of the past 5 days and when I get sick I quit drinking. Sometimes because I am taking NyQuil, sometimes because I just want to make sure my body recovers as quickly as possible but the specific reasons don’t matter.

The point is: today was the first day when I woke up and could tell I was feeling better, so I’ve gathered the remaining strength to have one beer at Bailey’s. Because I don’t want to push it and get sick again: I’m trying to get well, don’tchaknow.

It’s tempting to pour a lot of meaning into this beer, because it’s the only one for the day. It could be a symbol or “really matter” because of reasons. But when the beer becomes a symbol, how do I pick one? Because now the pressure is to have the perfect beer, instead of the one I have chosen. That’s just too much pressure.

It certainly helps that I picked a good beer. Hell, I chose the Drink By in part because of its reputation and taking a risk on what is my only beer of the day didn’t feel like a wise decision.

However, I choose to look at this moment as a reminder to appreciate what is in front of me. There isn’t the future beer. The beer of the past has been drank and moved on. There is this beer, that I can have because I am not sick anymore. That feels good, after four days of being ill.