We interrupt the other thing I was going to post today for an article about a beer that can be used to develop film.

Whatever I was going to talk about isn’t nearly as cool as that.

I frequently like to point to what the macro breweries are doing and say: Don’t DO that stuff!

However, I’ve also noted that there are some problems that macro breweries are uniquely suited to handle, because they can just throw a ton of resources at a problem smaller breweries just don’t have.

This story on AB InBev’s sustainability models is one of them.

The bartender wishes me a happy birthday when I come in and it’s always nice when someone remembers my birthday. He asks me if anyone is going to join me tonight and I reply: I don’t know. I put the word out. If people come, they come, if they don’t, I’ll be OK. I have been really lucky today already; lots of people have reminded me they love me and I got to have lunch with my Mom.

‘The world will keep on spinning,’ he says, impressed by my attitude.

Yup. Everything will work out, and nobody will get hurt. At least as far as I can make it so, I tell him.

All I can ask for. Well, that and this beer, which I purchase on the bartender’s recommendation. It’s a hazy IPA collaboration from Ruse/Culmination titled Creative Conundrum. Not too heavy on the grapefruit, certainly not on the finish, but a genuinely pleasant, drinkable beer. For a hazy, it is restrained in a good way and I’m thankful for that. Makes for a far better experience than the juicebox/grapefruit pith combinations I’ve had way, way too many of.

Today’s second pint goes to the Sisters of the Road.

A friend sent me this very cool story about a man who has created his own beer stein museum. I don’t know when I’ll be in Virginia, but this would be an amazing place to check out if I get there.

I ask a man with a perfect wave in his hair and a blue suitcoat what he’s got in his glass: “The Helles,” he replies. I look at the board. “The number 16,” he helpfully adds. 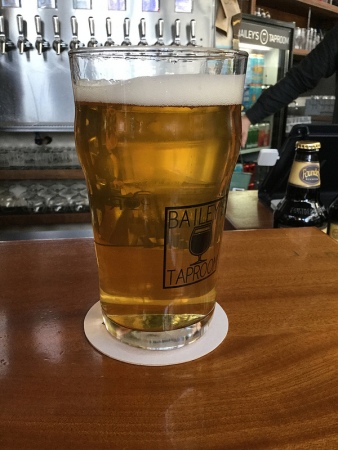 Got it: 54 40’s Hellish Helles.
But he and his friend-who also has a perfect hair wave and blue suitcoat (they have also adopted skinny leg jeans, too, and at this point I’m starting to think pod people) are having a conversation so I leave them be. Maybe something creepy is doing on there, maybe it’s a work uniform.

I don’t know that I want to know that badly, for once.

The Helles is solid; there’s the barest frisk of malt in the nose to give the beer some body and the finish is properly crisp. I wish it was drinking it in July, or at least with a hot dog, but for the first honest to god day in Portland where one could consider drinking outside, it feels appropriate enough.
Today’s second pint is for the Electronic Frontier Foundation.

And for your fun Friday post; a Youtube channel that seems to be equal part beer reviews and folk bands rockin’ out. Enjoy!

Here’s an interesting take on homebrewing in America: namely, less people are doing it than before.

What I am reminded of is that anecdotes are not data, and that the fact that less people have to Google “homebrewing” as a term isn’t necessarily an indicator that the hobby is “dying”. I know that in the homebrew club I belong to, membership has been slowly on the rise-but again, that isn’t proof.

In a rare instance, the comments of the essay are worth reading: bringing up other reasonable concerns such as ‘we don’t have as much money as we used to’ (provably true), ‘you seem to need a LOT of specialized equipment now’ (false, but with qualifiers), or ‘homebrew shop websites are kinda trash’ (well…YMMV) as reasonable barriers to entry.

The one argument that I think holds water is that commercial breweries are prolific enough, both in volume and scope, that the needs of most of the audience is being served. Gluten free ales? You got it. Belgian browns made with chocolate and peanut butter? Someone’s doing it.

Part of the drive to homebrew does come from wanting to make the beer that the market doesn’t provide…but if the market is providing then what you have is a nice hobby. A hobby that maybe you don’t have to put as much time into as you did before.

For the time being though, I see new people getting into it and at least as far as my homebrew club is concerned, a drive to educate and help new people learn and connect. Connections with people are what keep anything lively and thriving: community matters.

Still, I have to wonder if homebrewing will become-if it isn’t already-the kind of thing that people who knit, or rebuild old cars do.

Tonight, I’m having dinner with an old friend; she got a soju sampler, so I got the Chumchurum Soju. I figure I’m acting in the spirit of the evening, while freeing me from having to review a sampler tray and eat dinner at the same time.

This reminds me a lot of sake in flavor and texture, but it’s clear like vodka. I don’t really approve or disapprove of the Chumchurum: it exists and that’s fine. It just isn’t giving my tongue anything to latch onto.
But dinner has good company and that matters more than the quality of this drink. It’s an interesting paradox, right?

A little history on how we discovered the existence of carbonation. A fun Friday read. 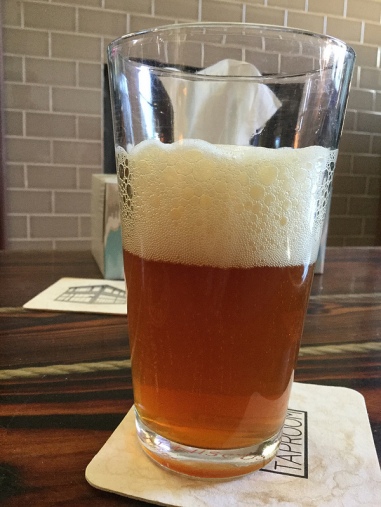 I can tell something is wrong visually-the head on this beer has bubbles that are too big, and the head itself is too thick while somehow not being dense. That’s not the only issue though;  there isn’t any malt or hop nose that I can pick up. For a beer that has this much carbonation, more scent would be something I would expect.

What I can pick up on the nose is more of a sour yeast nose, akin to a lager.

The flavors aren’t what I would hope, either. It isn’t thin, so that’s an upside, but the malt qualities aren’t there. This ale is neither roasted nor sweet, and it’s not as if there are hops to give me something to look forward to, either.

Even if there were, everything is just wiped by the dominant effervesce and a note of sourness. It’s not overwhelming, the beer isn’t undrinkable but it definitely isn’t my best effort. The mouthfeel gets dry in the corners and roof of my mouth, and the flavors just don’t come through.

I’m not sure if the yeast got infected on storage-this is most likely-or if it’s just an inappropriate yeast to use for this style. Knowing that I know, odds are the error is likely on my end. So I’ll have to try to ensure I’m sanitizing everything correctly, going forward.