I suppose I’m being a bit of a snob here but when I read that fruit adjunct beers (beers that have fruit syrup added) are the next big thing, I feel a little sad. In college, this would be a little like having people find out I liked heavy metal, and having them tell me how great they thought the Bullet Boys were.

Then again, I see people who like heavy metal now and I have to admit my tastes are on the popular fringe. What a lot of metalheads are excited about is just too out there for me. So it is with beer.

Although, I’m not sure that we can say that the rise of alcopops is really ‘out there’. That’s really more like the rise of Nickleback when bands like Cloudkicker exist.  But I had friends who tried the alcoholic root beer and dug it. Hell, I didn’t even find it horribly offensive (it really did taste like root beer and I like root beer). It’s just disappointing to see people go for the shiny candy when something even better from a crafting and style perspective is two feet away. Junk food is still junk food.

The other projections seem really obvious (breweries will close), really unlikely (defining Black IPAs or CDAs) or hopefully avoided (nitrogen in everything!)

CDAs are incredibly difficult styles to nail down: I’ve seen events where even the man who wrote the style guideline had difficulty picking the same CDA out twice. I think there’s a lot of wrangling to go before it gets settled.

The problem with nitro beers is laid out in the article itself:

…but the problem is a lot of them will be bad or uninspiring.

Exactly. Adding nitrogen to beer is a gimmick of technology that doesn’t actually improve the beer and I don’t think it will take long for consumers and brewers to figure that out.

Make good beer. Repeat. It’s not easy but it’s not gimmicky either.

A friend brought back some beers from Michigan to share, so I did a writeup on them! There were even a few beers I hadn’t heard of, which is always cool. Mildly edited notes follow:

Jolly Pumpkin Saison X:
This has a nose of honey, lemon and ginger. The label says ‘spiced’ but is reluctant to tell us what spices were used. This isn’t just a saison; it’s got a bit of funk to it. It also has an element of citrus rind bitterness to it which shows up sharply and really torques the beer in a negative direction. My host offers me candied ginger and…it compliments the beer well! So, this beer has an issue but that issue seems to be solved with candy.

Founders Breakfast stout: the nose is like a cold up of coffee. Iced coffee, actually and this is a pretty good way to describe the beer as a whole. Plus, I think it’s actually a stout, not a porter disguised as one, which is always nice. It claims to be an oatmeal stout and I believe the body is there to support it. It’s 8.3% so you reaaaally can’t call this a breakfast beer but it’s still pretty damn tasty.

Arbor Brewing Ypsi gypsi session IPA; this has an orangey thing happening. Buuut there’s a papery finish that I have to scrape it off the roof of my mouth. I think this beer got old, unfortunately, and so isn’t giving its best impression.

Brewery Vivant Undertaker; Belgian style dark ale. The nose is…soft. The beer is, too. Almost supple, the rotation of roasted malt flavors over the tongue. It doesn’t present any strong flavors (coffee or chocolate) to latch onto, but there is a roasted malt quality here that lacks the viscosity of a stout. A crisp bit is at the end, too; this beer isn’t highly effervescent but it does have some bubbly to keep things lively. The nose all but disappears quickly, leaving a sweet ghost in its place, no more.

Jolly Pumpkin Calabaza Blanca; the nose has that tart quality, the kind that usually means I’m about to drink a cup of vinegar. But the beer itself is nicely restrained. It really tastes like dry white wine, with an effervescent quality. I can get behind this in limited doses and certainly wouldn’t hesitate to recommend it.

Brewery Vivant Farm Hand french style farmhouse ale. That seems like a lot of buzzwords that don’t say a lot but here’s what I am picking up: the nose has a hay, almost horseblanket funk. The beer is light and crisp all the way to  the finish, where the funk comes back again but in a groove thing way, instead of a Fabreeze moment. I like it.

Holy cow is this beer bitter. It’s arrived headless too, and I am unable to get a whiff of hops off it. That’s really not good news for an IPA. The beer seems cloudy as well: now that isn’t automatically a problem but the bitterness of this beer is passing into a dirty flavor so I just can’t trust it. I don’t know why, but I frequently have issues with Migration’s beers.

The ceiling looks like a child got to toss glitter onto it, red and green lights spackled all over. The vibe is definitely Portland new-dive, with more pinball machines than video poker games. That’s kinda cool.  The chalkboard nearby proclaims BANDS TONIGHT, but I’m here too early for music and you can still buy packs of cigarettes from behind the bar. The white tent outside is where you go for smoking.

Couple guys talking next to me are talking about the place; I think I’ll let them have the last word:

“Yeah, I’m just here until it gets crowded-I just got off work. I tell you ’bout my new job, dude? I’m tossin’ kegs around for McMins. Only problem is the hour and a half commute on the bus each way.”

“Dude, I got a buddy at a dealership, I think we can hook you up with a beater that runs.”

“That’s be awesome. All I need is somethin’ like that: I’m good with my hands so I can work on it, too. But yeah, I just gonna have couple-three beers and then get out of here before it gets too crowded.”

“Yeah. Doesn’t happen until around 8 but before that it’s a pretty mellow place to hang out in.”

Full disclosure, I know at least one of the people putting on this event.

That said, this is the very first Pacific Northwest Homebrewers Conference and I’m really excited about this. Just look at the conference schedule! They have some really interesting stuff in the seminars, which are  being put on by some experienced people. Names I recognize from either awards ceremonies or beer judging experts.

So I dig it. It looks like a great opportunity to meet and learn from other homebrewers, and since being an OBC member has certainly improved the beers I’ve made I always like to recommend events to help people brew better beer.

Uuuuunnnnnfortunately I can’t go. I have a schedule conflict that will almost certainly take me to Seattle so I’m going to miss the first one. But next year, damnit!

How good were the judges? A beer was sent back because the judges could identify the brewer based on the description. That only happened once but it still impresses the hell out of me.

There were 525 entries and I’m fairly certain every active brewery in the state of Oregon sent beer. Every beer they make.  From the every day to the weird rare stuff, I saw a lot of beers pass through that room. After it had been judged, I even got to taste some! This is one of the perks of being a steward, and we deserve it, don’t let anyone tell you different. Highlights included stuff from Long (whom I had not heard of before this event), Base Camp (the anniversary Belgian dark is good) and Deschutes (2013 Dissident ale is outstanding, as one might expect).

The winners won’t be announced until Feb 23 so you know as much as I do at this point. But, they let us take some of the unopened beers home after the competition was over and that’s always nice. If you’ve been following me on the  Untappd app then you’ve probably seen me drinking and rating the spoils of my work. I didn’t feel like there was anything thematic enough for a full blog post but I can at least do short bursts there.

“I just put that on tap,” I’m told when I order the Stone Arrogant Red Aleca. I have no idea what I’m in for, I just read the sign on the chalkboard.

“Tell me what you think,” the barkeep says so I do: It’s maltier than I’d expect but the finish is quite bitter, like an IPA. If the nose had any kind of  hop presence I’d say it WAS an IPA.

“They call it Arrogant Bastard,” he says, “and it came recommended.”

I bet it did. But…why was this beer mislabeled?

Well, so much for trying something new. I’m complaining but I’m not exactly dissatisfied.

The signs behind the bar let patrons know they can get wine growlers. I have to admit, I would never expect someone to want a growler of wine. Bottles usually are enough, right? Still, I don’t judge.

It’s so quiet and low key in here, I can see myself coming here to have a soft discussion about violent things. It feels private, even if the space is wholly open.

This amber ale is almost there.

It’s a solid enough beer but it tastes a little thin and that is because I added too much water to the wort after the brew.

See, I always have to add in some water because my brew kettle doesn’t hold five gallons of boiling liquid. It holds closer to four. So, I top the wort off and most of the time, that’s not a problem.

This time, however, I added in a bit too much water and that means that the malty qualities of this beer are muted, instead of prominent. An unfortunate mistake but one that is easy to fix and isn’t all that bad, honestly. Sure, the caramel notes of this amber aren’t as robust as I wish they were, but it’s not a bad beer by any means.

This is especially surprising as my notes remind me that this is a beer where I did have to add in a second yeast in order to get the batch fermenting. Mixing yeasts can have weird results but it looks like I got away with it this time! 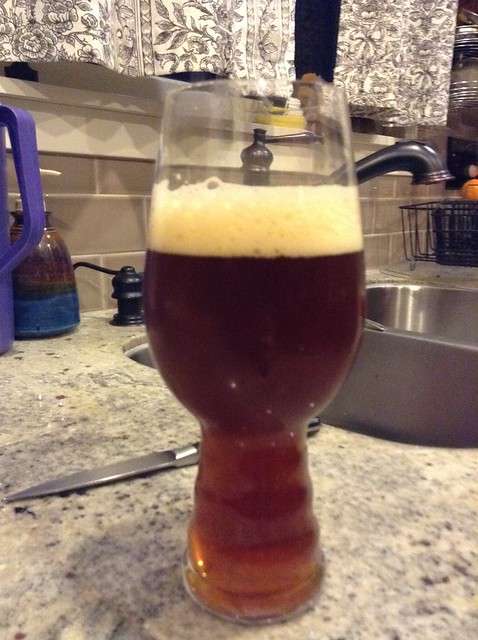