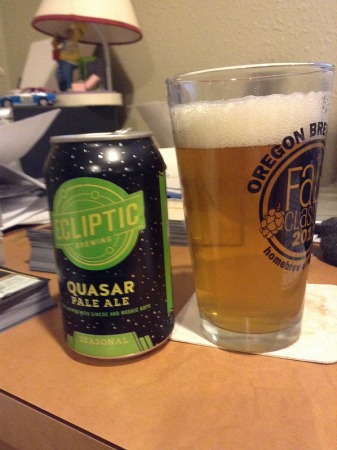 The cans have all been particularly foamy! But it pours into a class nicely enough.

The nose is strong and up front; I get the mosaic, I think; grassy, a little citrus there.

The flavors pick up in the drink too: fresh cut grass, a little lemon. I like it quite a bit and I want hot dogs on a picnic day with this. The finishing bitterness has a slightly drying effect, but it isn’t too strong and it doesn’t linger. I really dig on this-there’s a sweetness in the first phase of the beer that really helps brighten the rest of it up, keeping it from tasting one note and being too sharp. Well done.

It’s Thanksgiving and my friend has brought over Aslan Brewing’s Batch 15 NEIPA. The nose is sweet-I can pick up sweet grapefruit just from the can being opened. The flavors follow up on this, but the beer isn’t very bitter on the finish. It avoids being cloying at any point, I’ll give it that. It is a bit sweeter than I would be fond of, but it isn’t a poorly executed beer by any means.

But it’s here and it’s here because my friend really likes IPAs. I have no objection. It’s Thanksgiving and I’m afforded the luxury of getting to see my friend and my family and, for a little bit, write off the rest of my responsibilities. My family gets along pretty well during the event, and I know that’s not true for everyone. Plus, the beer is reasonably tasty, on top of it all.

In a year that’s been challenging on multiple fronts, I’m glad to have time with people I care about.

This week’s second pint goes to the Oregon Humane Society.

Ed. Note: I’m off schedule due to travel and the Thanksgiving holiday, so this is substituting for the regular Monday post. I’ll be back on track next week-for a week.

In a recent conversation with a friend, I mentioned a brewery in Bellingham I had not heard of but recently got to drink and liked, which lead to me complimenting the beer scene at large in Bellingham-which is pretty amazing from down here. Her reply;

It does. So much so that we don’t even have to bother with the two Melvin locations after their epic fuck up

Turns out, one of the head brewers came to town to visit, went to another brewery’s pub, opened up one of Melvin’s beers in that location (rude, even if that wasn’t a no-no) and then groped an employee, which I hope I don’t have to outline to my audience the fuckery there.

This, as you might imagine, did a lot of damage to their reputation in the community. Damage they have addressed in what I would call a ‘corporate manner‘.

Now, I’m not saying that the culture at Melvin hasn’t or cannot change. I don’t know any more than what I’ve shared. Perhaps things have truly changed.

What I do know is that until I learn otherwise, I don’t really want to buy any of Melvin’s beer. I have options and a lot of them. Why should I give my money to people who are behaving like jerks? I don’t give my money to ABInBev when I can, for similar reasons.

Oh, and if anyone from Melvin is reading this, when I say “things have truly changed” I mean that there are actions being taken to fix that culture and contribute to amend the world in a way that the toleration of previous, harmful behavior harmed people.

Not just a mealy mouthed statement of “we’re very sorry”.

There’s some grass in the nose with a little citrus there, too. It’s more lemon/orange than grapefruit, which I approve of. The citrus note is not too strong though, just making sure you know it’s there more than making a statement. It sticks through the life of the drink, which is nice.
The beer has a sweet front end that lands right on the middle of my tongue. I enjoy that, as it helps keep things in balance. The bitterness on the finish tilts to lemony, which is nice too: that bitterness lingers in the sides of my mouth but again, nothing to sharp. The Crowd Pleaser wants you to know it’s there, but doesn’t need to take up the whole room.

I can appreciate that. 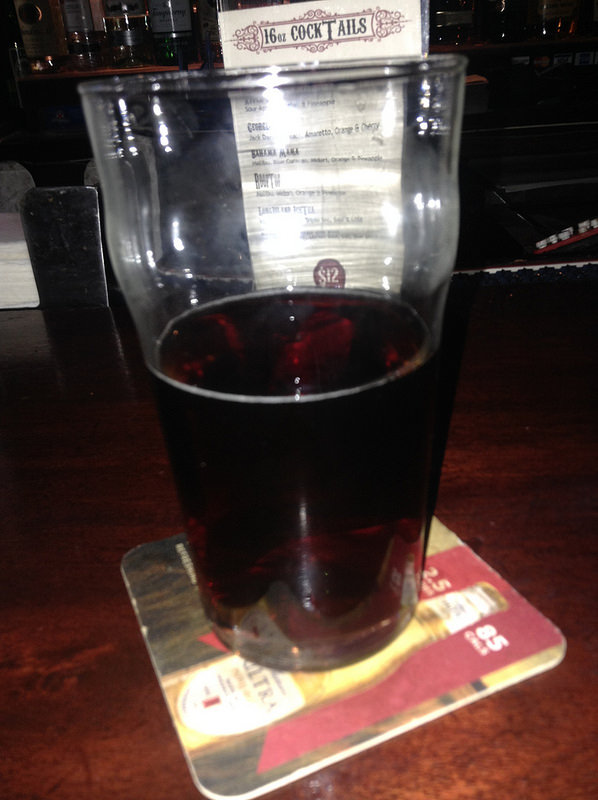 This is the house amber ale at Fitzgerald’s Pub in Manhattan, New York.

I’m in New York because an old friend got married and asked me and another buddy from Portland to be his groomsmen. I’m in Fitzgerald’s because the third groomsman, whom I hadn’t met previous to the day of the wedding, invited us to his bar the next evening.

To my surprise, the amber is made by Michelob but damnit, it’s tasty. Nice mouthfeel, just enough caramel malt to look and taste amazing and easy to drink.

“It’s 6%,” the bartender-and our host- says, a little apologetic, his Irish accent softened by years of living in New York, “so it’s a little high,” and I chuckle in response.

I had a blur of a weekend, and 90% of it was in service to the wedding I attended.

But for just a little bit, after it was all over, I was able to make a little time to sit at the pub with some old and new friends, and have a drink.

I feel like visiting all the places here would be a great way to experience an important part of Oregon’s contribution to the beer scene.

And, I’m going to be attending a wedding this weekend so this will be the last post until Nov 14th! Have a safe weekend, everyone.

“We could’ve saved the Earth, but we were too damned cheap.” – K. Vonnegut

I’ve been thinking about this quote often in the past few weeks.

I always wanted to be a hero when I was a child, I just didn’t understand what the cost of heroism was. As I got older, I had to temper that desire as my understanding of heroism deepened. But I never stopped wanting to be a hero-to be someone who genuinely saved others. I was just hoping it would not come at the cost of everything.

I know this year has been devilish for so many people; difficulties personal, fiscal, social, political. Just shy of terrifying, I would say although they might just go all in on being terrified and I would understand that, too.

And it has broken my heart more than once, just this year. Because we wielded so much power and we could’ve saved the Earth….but we decided to do something else. Worse,  I think we decided to do because we bought into the idea that our ability didn’t involve responsibility.

Hope is a funny thing, though. And I hope that my fellow citizens will rise to this occasion. I think we can save the world-save ourselves, even-if we just participate.

I’m an adult now: I know that everything costs. Participation and engagement cost, doing the right thing costs, caring about people and their well being, since we have so much, that costs. But there’s more than ourselves at stake. Our honor and ideals-intangibles that we cannot ever reclaim, should we sell them-and the lives of people, something else we cannot get back, should they be sacrificed, are on the line. It feels like we could lose everything, heroism or no. 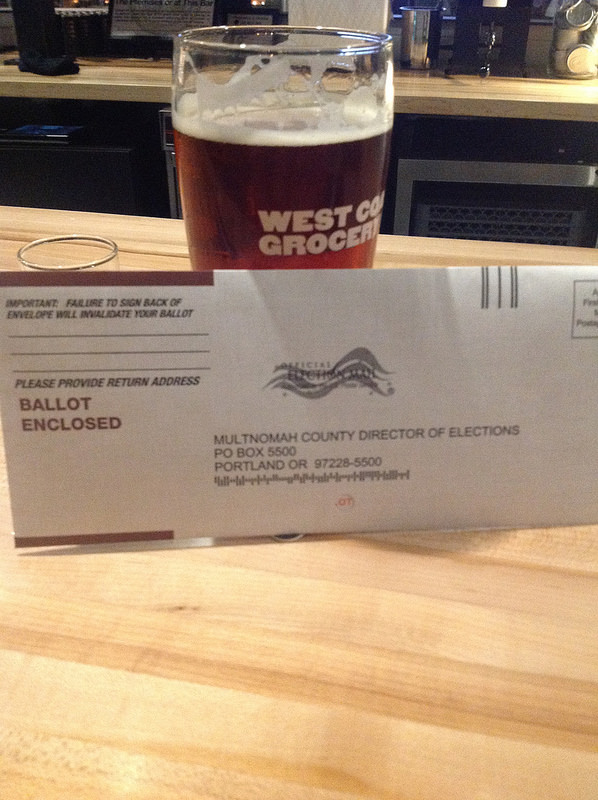 People-particularly vulnerable people- are scared. Smart people are scared. We have real problems to solve and the will to solve them has not been exerted. Has been shunned, which is even worse, when I think about it.

But I still want to be a hero. I hope that other people do, too. And I hope that they all become voters – active participants in the work of citizenship in America. However much they can help, they help-but at the very least, as voters: People who don’t just check a party line but actually try to understand what they are doing and the consequences for it are. Who rise to the call every time. Because that’s what heroes do.

Tomorrow is Election Day.  Let’s be heroes but if we can’t be heroes, then let’s at least be engaged. Get out there, vote. Then let’s get a beer at the West Coast Grocery.

Because the Age Of Wonder fresh hop ESB is absolutely delicious. The nose is green and grassy, but it gives way to a lush maltiness that makes this beer incredibly easy to drink. Just enough C30 malt to give it some copper color and a really low key finishing bitterness, both malt and hop influenced. I would have another, but I really need to turn my ballot in. It may not be heroic, but it is my responsibility, so I’m taking it on.