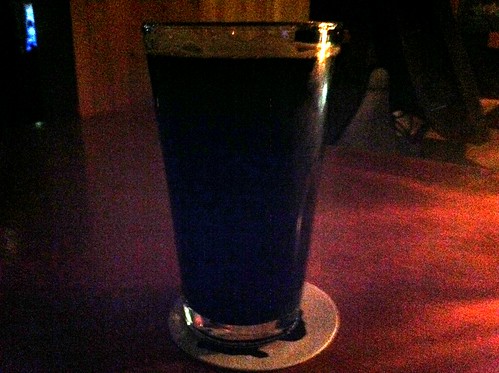 I am engaged in another long standing tradition: going to the pub after getting bad news. In this case, the White Owl Social Club, which I’ve been meaning to get to for a long time.

There’s a Natian McGuinness on tap-milk stout aged in Kahlua barrels- so I get that and get somber. It costs $5.50 and instead of giving me change for my $6, she just keeps the .50. Her loss: I was getting ready to tip her a buck.

But the beer has got a really nice coffee flavor going on, with the kind of oily mouthfeel that I expect would glisten in the sunlight, like a puddle from an old car. I should probably let it warm up but I just don’t have the endurance to do that tonight.

The White Owl is lively and the Misfits is on the pa. It’s dark in here, too dark to play cards but I like it nonetheless. It doesn’t matter that I’m alone, alone is OK right now. Take your blessings where you can, I guess.

I want to be at home and sheltered from all of this. I want another drink. I want my parents to hug me. Everything is complicated and nothing looks good. I am confronted with an overwhelming sadness and I don’t want to wrap alcohol into my unhappiness, yet alcohol is wrapped into my work. It presents a very strange problem.

Because doing the work is a sustaining thing. Keeping the gears of your own life turning properly helps because it has a mindlessness, a method to keep everything going when all seems lost. We don’t have to talk about the risks of being a drinker who is a worker too often. Luck? Active avoidance? Perhaps the work supersedes the drink for enough of us that we don’t feel like we have to concern ourselves. Maybe it’s just that most of us are able to keep an even keel, we know that when things go wrong, there’s time for a drink but not several, or several drinks but not every day. The drink is our work, our work is not the drink.

I finish the beer and decide to pass on another. It’s going to be a long night and it’s important to make the good decisions I can when I can. Not staying out late by myself drinking is that good decision. Let’s go home.

The late beer writer Michael Jackson’s birthday was celebrated recently, and while I hate celebrating birthdays for people who are dead, it was a great chance to read this collection of articles he’d written.

I’ve not gotten to all of them yet but so far they’ve really been worth reading. His love for beer is easily evident but what strikes me about the columns that I like is that he appreciates the people he’s talking to. I never met and don’t know Mr. Jackson but I don’t think he could have written about his subjects so well, if he didn’t enjoy the company he was in.

Plus, as a writer it’s always good to read people who are better at it than you are.

This is just a signal boost post for an event that I think is pretty cool.

What? They can’t all be illuminated manuscripts, people.

I have finally made it to the Breakside brewery taproom out in Milwaukie. Sipping on Will’s alt, which is a very light beer and a nice bitey finish. It’s got the feel of the crisp day I’m drinking on, actually. Cool, dry and bright. It’s almost too light for the bite at the end but somehow it’s holding together. 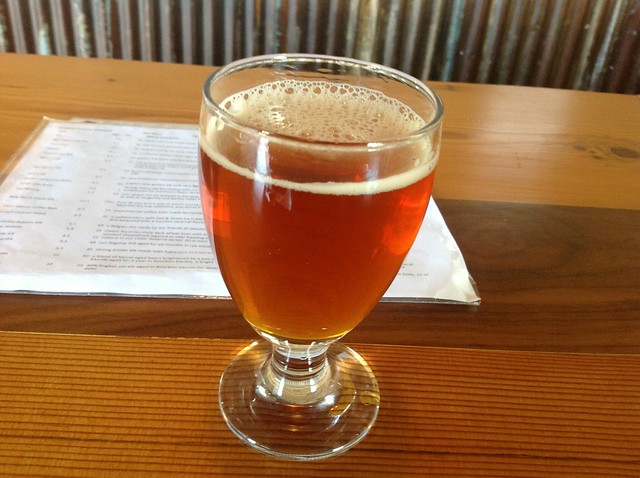 This is totally a workspace, not unlike Reverend Nat’s cidery: pallets of grain are in the corner, barrels, fridge units, doors wide open to let the steam out; the tables and a TV in the far corner seem to be the only concession to the idea of a serving space. There’s a massive-looking wall of old wood separating the bar from the rest of the space and I can easily smell grains in the slightly humid conditions.

Out of nowhere, I get to talk sports a bit with someone at the bar and it’s pretty awesome. Strangers having a chat is the best thing about pubs and it reminds me why I do what I do. Maybe it just feels more casual in here despite the working conditions? Maybe it’s just a good day to talk to strangers.

I believe the next series will go back to ‘I’ll have what they had’ theme because it lets me have conversations. Too much internal dialog is bad for anyone.

Before I leave though, I get a glass of the Safe Word triple IPA: it has a peach smell and is very tasty! For some reason, the bitterness feels less in this beer than the alt which is pretty wild.

I didn’t really have anything today, because I  spent the morning brewing. The plan is to do another ‘How To’ series.

I’ll leave you with this: 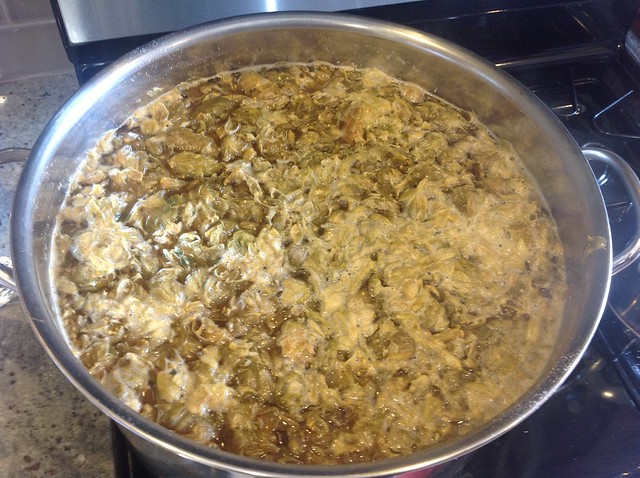 Take a look at that, eh? Not too bad, if I say so myself. This is the second part of the experiments I did, this beer being the one that I tried to create as an “American IPA”.

Now, I’m not saying that Popular Mechanics is an authority on brewing but of the hops that they suggest make an American beer stand out, I’m using 3 out of 4. Must mean I’m doing something right, eh?

As for the beer; the citrus notes are more prominent than I expected they would be. I’m going to actually have to do some research, I think, and see if I can push the resin and pine flavors in a beer someday. Those are the flavors I associate with American IPAs and while there is an undercurrent of pine here, it’s not very strong at all.

I do like the malt bill here; the C40 and Munich are providing some nice body and balance to the beer and keeping the hops from going crazy. Have to remember that for next time.

Sorry, but I am not going to try and brave the people who think that St. Pat’s is Christmas for Alcohol. Going to stay home, have a nice pint, and wait for this shit to allll blow over.

My Dad once told me about an interview on NPR he heard where two guys were talking about rock music and making decisions about what was or wasn’t included in that. As though they could be the arbiters of what is or isn’t ‘rock’. What standard they were using doesn’t really matter because rock music is like pornography: You know it when you see it.

So when someone comes along and tries to define ‘craft beer’ I am exceedingly wary. It often comes with a mentality that says that bigger is always worse and smaller is always better (unless of course, it isn’t because it is/is not making money or ‘reasons’). But it’s exceedingly silly for us, as consumers, to be involved in or made aware of this conversation because it is a crock of shit.

You know what I want? Good beer. The best beer I can afford. If Budweiser produced a better lager than Hopworks, I would buy Budweiser. You know why? Because it’s better. That’s really the only reason I need. I have nothing against buying local and everybody loves to cheer for the home team but when push comes to shove I want the best thing I can afford.

Widmer and Sam Adams are some of the largest, if not most recognizable small brewery brands in the country and they still make great beer. Including or excluding them from the term ‘craft’ is strictly useful for trade organizations: it doesn’t help the consumer at all. And this is what the argument tends to devolve towards; how to promote ‘craft’ because the public has been lead to believe that craft beer equals good beer.

I can name three breweries off the top of my head local to Portland that I think produce awful beer. Should their product escape this city, then I would advise destroying it. I mean, maybe if they were really thirsty, sure but since water still exists… My point is, the term ‘craft’ isn’t going to help someone find really good beer, just breweries of a particular size. The sooner we advocate for that definition, the better.

I appreciate definitions and I know that these terms can be helpful to people. How do you describe music or art or movies or anything without setting it up in relationship to the other things around it? What is the difference between Metallica and AC/DC to someone who hasn’t heard those bands? Between IPAs and stouts, to someone who hasn’t  yet drank them? There had best be some defined terms, yes?

But let’s not start confusing our terms. At some point, you want me to tell you if a beer is good and who makes it isn’t really relevant.

I spent the day listening to podcasts on sterilization.

I’m doing this because I recently had the opportunity to purchase some Star-San and I have no idea how to use it. Great thing about the modern age; the tools to learn stuff are a lot more accessible. It’s looking like a couple things are true:

You don’t need much of it and you don’t need a lot of water. So when I’m putting beer into secondary, I could use a lot less water sanitizing my equipment, instead of spending 6+ gallons just to clean a carboy, airlock and racking cane. Seems like such a waste. Plus, I can use small doses of Star-San when I’m making a yeast starter, and apparently it actually helps feed the yeast!

I’ll still use iodophor for the bigger jobs-bottling day works just fine-but if I can save water with this process then all the better.

In a time honored tradition, I am waiting at a bar for a woman. I am using that time at the bar to write the blogpost, though, instead of complaining out the state of things re: men v. women, or pontificate on life with the bartender.

I shall pontificate with you, instead.

I get the Hop Valley Citrus Mistress while I wait at Proof. It’s served, as you might be able to see, without any head on it and I feel that it really hurts my impressions of the beer. I can’t get anything on the nose at all! So what’s left is a liquid with a crisp mouthfeel and a citrus pith bite.

I can’t really endorse it but I also can’t blame Hop Valley either. By the time I’m able to agitate the ale to get any scent, the beer is starting to smell light struck! I’m starting to wonder if this is one of the India Pale Lagers that have been hitting the scene lately. It’s light enough and hoppy enough, that’s for certain. I just wish it was a little more well rounded.

As for Proof…well, I just don’t know that it’s the kind of place I can get any pontificatin’ done. It’s casual enough but I’m not sure Proof has enough time under its belt for it to feel like a neighborhood bar. It doesn’t have that ‘lived in’ feel that makes it comfy and it is too Portland to be high class and it’s too bright to tilt towards a proper date night place. Maybe if I had a group of friends to take over a table, that would rock.