A few weeks ago, I made this beer. I didn’t follow the exact instructions…again. However, I did so out of a choice this time, instead of necessity! Hopefully that will make it all right.

I started with steeping .75 pounds of Six Row malt, which is a first for me. That seems a little unusual, considering Six Row is one of those base malts that’s good for all kinds of beers, but recipies never called for it before. When I took a whiff of the grains though, I thought: that makes a beer. It was rich and bready, like the head of a really tasty pale on a  hot day.

The recipe called for about four differnet hop varieties, but with hops being as expensive as they are, I decided against variety and went for volume, with two ounces of Domestic and half an ounce of Willamette during the boil I’ll also be dry-hopping this beer with the low-alpha hops (Willamette), so I expect to get a more grassy nose, with a citriusy flavor. We shall see!

I wanted to make a starter yeast, but I hadn’t planned enough in advance. However, I’ll be using the yeast from this batch as I did with the saison, so hopefully I get two uses out of it. I used two packets of Wyeast’s 1056 for this beer, and it’s taken off quite nicely.

This is the beer, with a heat exchanger (left, foreground) and the carboy (right) just before I cool it and start to ferment it. Update next week on how it turned out!

Oh, and I completely forgot to get an Original Gravity reading. I swear I’ll get the hang of this someday.

Man, between the nuns and the gods, you’d think I was getting some kind of salvation.

But no, just an interesting article (including a little history) at CNN.

I know this is all getting posted late and such, but I’m doing the best I can.

My return to NYC had me sitting on the train, facing south. What was weird about the west side of the tracks was how lively the scenery was; buildings that were active, logos freshly painted on them, the sense of despair on the east side quickly drained for a more vibrant scene. There was literally a wrong side of the tracks!

Off to the banksy exhibit I went, to see animatronic creatures in disturbing poses, and then it was to the Four Faced Liar for drinks. I was in need of them, and they served…Yuengling. Now, I realize that’s no big deal to any of my East Coast readers…oh wait.

But I can’t get that beer on the West Coast, and so I’m dying to try it. And It’s…well, it’s a beer. A solid American style lager, with the kinds of flavors I’d expect (not much of any) except for a slight funk at the back end. It wasn’t bad–a bit skunky, but it was only noticeable due to the absence of flavors preceding it. My notes suggest to drink during summertime.

Next up, I went for the Sixpoint IPA. It was bitter, but not overly so, but it was a bit lacking on the nose. That’s where I would’ve expected to pick up a lot of the essences of an IPA, and there just wasn’t much there. At this point, however, I’m meeting lots of new people, and I’m getting distracted. In the interest of being sociable, I put down my pen and enjoy the company I’m with.

There was another bar after this, but I couldn’t tell you the name of it. I had switched to Jameson’s and was slowly working towards the Killing Joke show.

The Filmore is a good place to see a show; it reminded me of the best parts of Portland’s Roseland theater, with an upper balcony, two bars, a couple booths and a few places to sit as well as stand, there was plenty of space to see the bands. I’d arrived in time to see Ascension of the Watchers (who I thought was OK), which meant I had time to get a beer.

OK, first; why the fuck would I ever order a seven dollar Corona when there’s Bud? I am not such a fool that I think paying an extra dollar for a lemon wedge improves my drinking experience.

But Killing Joke came on soon after, and they were terrific.  That tends to make those little inconveniences worthwhile. I caught the subway back home, and snagged a bag of Doritos and a Sierra Nevada because I was hungry. Unfortunately, I couldn’t find a bottle opener, and flying means I have to leave my trusty Swiss Army Knife behind. Sigh.

On my last day in New York, I mosied around. The pubs that we’d hope were open (like the Barcade-an oldschool arcade and bar) weren’t, so there was no new beers to try.  Soon it was time to get on the plane home, and after a brief disorientation on the subway, I found myself at JFK airport. I had enough time to grab a Sam Adams pale ale, which was surprisingly good, before getting on a plane home.

Uh…those names are for cancers that the beer would prevent. Not cause.

In the afternoon heat of a fall day in New York, I found myself at the Life Cafe in Chelsea, where stylish people hang out with trees as shade and Sixpoint’s Brownstone ale was on tap. It was, go figure, a brown ale–once again demonstrating how clever people get with naming their browns.

Nonetheless, this brown was a bit unremarkable, both a good and bad sign for a brown I suppose, but then it was time to leave, for my guide, the lovely betweenthelines, who was to be my guide to the berg of Meridian, CT.

The train ride up I sat facing North, on the right side of the train, and I was struck not only by how pretty  it was, but by how many graveyards, both human and architectural, there were. Parts of this country have been smacked pretty hard by economic hard times at various points in our history, and the remains still linger. Unlike the human graveyards, though, these places are burnt out, ugly; their shattered windows and smeared brick faces making them creepy and appealing to my desire to explore them, somehow.

But the train rolled on. We soon found ourselves at Archie Moore’s, where I asked a younger, guido looking bartender what was on tap. He pointed at the taps (which were arranged such that they were difficult to read) and then gestured a-la Vanna White at the bottle selection above his head. btl commented as he walked away, “Neighbor’s kid…he was an asshole as a child, too.”

I selected Magic Hat #9, as I’d never had it before, but this time requesting it from an older bartender, his mouth lined at the corners like a tic-tac-toe grid. He merely nodded; old school, and got me my beer. 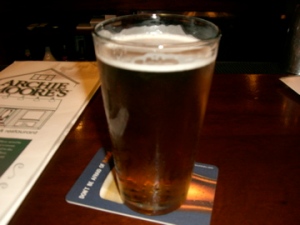 A tasty pils, though not what I was hoping for. I don’t know, if you’re going to name a beer after a number, maybe it should be more exotic. Then again, perhaps if one drinks too much, being able to just say, “Number 9,” is all you want to have to do.

Next up was dinner, where I was introduced to the anarchist DJ Manwhore, and the perfectly awesome Witchgrass. Dinner involved roasted pork tenderloin and a whole lot of Presidente from the Dominican Republic. This was a lager that had the sweetness of a belgain. What the heck do I call it? A lagain? Belger? Damned if I know, but it washed down the spicy food very well.

Then it was off to…well I didn’t write that down. But I did recall that I had the Harpoon IPA, which was no match for the IPAs I get at home. It was more like a pale ale instead of an IPA, but not a bad beer. DJ Manwhore started playing with an old scale in the window, while we discussed healthcare in this country and I went back up to the bar, this time for a McSorley’s.

It’s rare that I get to say this, but; Avoid this beer. I like to take risks with my beer selection and sometimes, it doesn’t pay off. This was one of them: McSorley’s had an ashy flavor in it, which had me recoiling from the first sip.

My final beer of the evening was Loose Cannon. An interesting beer, it was trying to find a middle ground between the mellower British style IPAs versus the severely hopped NW IPAs. Bitter, but not unevenly so, yet with the strength to linger in your mouth long after it had been drank. Probably my favorite beer of the day.

One thing about going to the OBC meetings is that sometimes there are goodies to take.

And this time, there were bottlecaps. Including Budweiser bottlecaps.

For home brewing there is nothing more punk rock than serving stouts with a Budweiser cap.

Well, maybe there is, but it’s as punk rock as I need to be.

After arriving in Manhattan, my friend Ed took me to Molly Wee’s, which is somewhere near Madison Square Garden. While I probably could find it walking in the city, I couldn’t tell you where it is. New York is like that for me; familiar but mystifying.

While the selection was rather slim, it was my first chance to relax since I’d gotten on a plane 8 hours earlier. Stuck between everything I would expect, and nothing, I went with Samuel Adam’s Oktoberfest. It was a solid, reasonable beer, malty and it had a kind of workmanlike quality that I was going to rely on whenever I was limited in my choices. Sam Adams seems to have established itself pretty strongly, at least in the Yankee areas I were in, as the solid premium beer of choice.

Fortunately, my next stop was Brooklyn, where the awesome author of the Gift Donkey began to show me around. New York was quite warm, so she walked us through the neighborhood,  passing by the bad Korean place, the crazy local dive bar (“you will get weird looks when you walk in”)  and the Williamsburg expressway. On the porches people hung out, having overloud conversations about giant bugs or strange boyfriends, or maybe both. We stopped at Mugs, a badly lit place that had a six page menu; four of beer, and two of food.  Oh yeah, this was going to be my kind of place.

Many of the beers were belgian ales, many of which I recognized, and I was a little discouraged because I wanted to try something I hadn’t before. Then on the chalkboard sign that wasn’t even illuminated as well as a grade school stage play, I made out, Brooklyn Lager on the menu.

Well, I’ve never had that before! Gimmie.

The Brooklyn Lager was decent, but I admit I was hoping for a little more. My own fault, though, for picking a beer that is meant to be so unremarkable. Spoiled by the Hopswork lager? Maybe.

So next up was Sixpoint’s Incubus. I had no idea what I was getting when I ordered this, and found myself confronted with a yellow, hazy beer with a banana nose. The head on it had large bubbles, giving it a foamy, airy quality that made the nose stand out. The beer wasn’t very challenging, but it was still pretty tasty, and by now I’ve been up for seventeen hours. Which is my way of saying; my notes and my memory both fail me. I forgot to take pictures, and was all done in, so should this be less than accurate, please forgive me.