Just another reason to love science: They’ve discovered that adding hops to the beer after fermentation is apparently complete, can lead to some further fermentation process!

This news is more interesting, admittedly, for brewers and homebrewers (like myself) than it might be for the lay person but as a homebrewer, I might be able to use this information to plan how my beer might turn out or what might result because I’ve added hops to the beer in secondary. 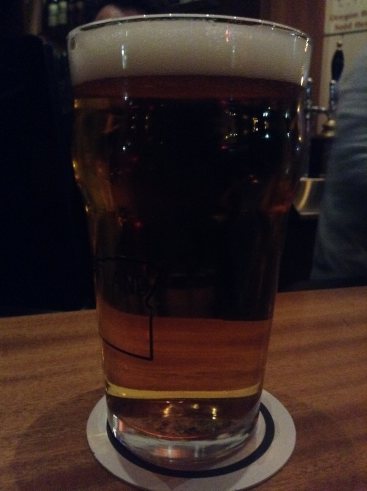 I’m having Ferment‘s Czech Pilz, and this is a treat, because I don’t know this brewery! A chance to try something new on top of it all. Unfortunately, I am, once again, interrupting someone on their phone when I ask for their selection so I’ve retreated to a quiet space on the rail to appreciate this beer.

The flavors are all very clean; the finish almost the barest hint of hop bitterness on it. But what I really like is the way it feels: the Pilz has a denser viscosity to it that rolls across my tongue sweetly and gives me more to do than just pound it down.

So I look around Bailey’s to see the crowd. It’s pretty calm for a Saturday evening, and everyone seems to be relishing the rarity of it.

There are people of Asian descent in here, as well as Indian. The man I asked? Had a faintly Slavic accent when he replied. A black man and a white woman toast their glasses on my other side, an old sentimentality at play. The table of white folk nearby doesn’t bat an eyelash at anyone; the bartenders serve all of us the same. The couple wrapped up in each other’s words, the bearded dude with the glasses and the snow hat, me; we’re all immigrants too, people who arrived in the past to exist in the same space in the future.

We’re all even at the pub. We pay our money, we drink our drinks. We even converse with strangers, sometimes.

It’s not a bad world, just one that I’ve seen less and less of lately. Let’s create more of a better world, OK?

A very cool recounting of how one of the biggest hop farms in Australia got started.

So, this is a bummer.

In my defense I was trying to make an imperial amber, because everything else had been going so well! Why not shake it up? What I should have done is doubled down on what I was doing, until it was perfect. 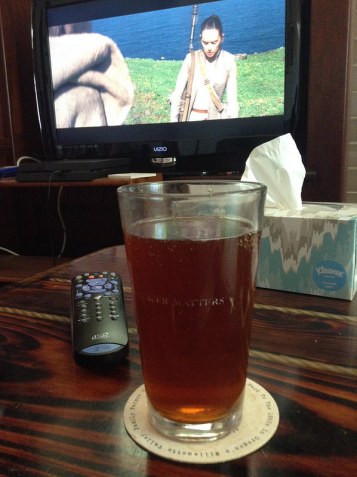 The nose is sweet, not quite sickly so, but definitely without much dimension.

The beer is also sweet, which is to be expected. The  complexity comes on the finish, which is interesting. There’s the alcohol warmth, yes, but there is also a spicy note, which at least means I’m not drinking something entirely bland and syrupy.

It’s weird though, and it doesn’t hold together at all. I don’t hate it but I also don’t want more of it. Safe to say, this one did not work out like I hoped. 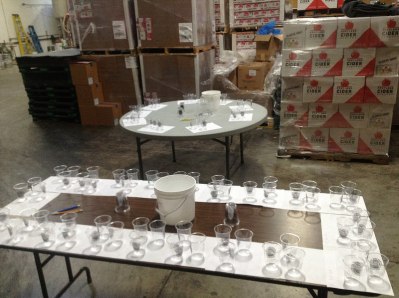 This is a picture I took of the setup for the Best In Show judging at my homebrew club’s competition, the Fall Classic.

I love being the steward for the Best In Show because it’s my only opportunity to really listen in on how judges judge. As head steward, I my real job is making sure all the other stewards can do their job, which means I’m not as involved on the ground floor, except for this part.

I was doing this all weekend, though, so I didn’t have an opportunity to get out to a pub and talk to someone. Instead it was all about service and learning from people who know a lot more about the technical aspects of beer than I do. And it was great!

And for your Friday, the discovery of what might be the world’s oldest brewery! Sure, you can’t go and get a pint there anymore, but what’re you gonna do? 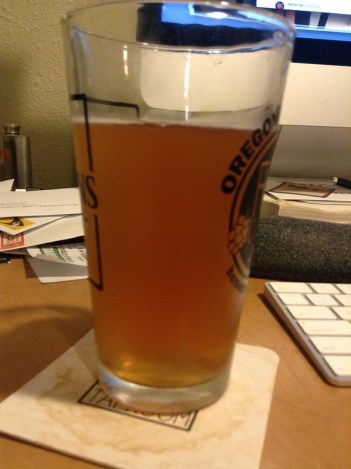 This iteration of the Blue Dream marijuana series has a nose with a dollop of marijuana but in combination with the hops, reminds me of the old school lagers more than anything else. Which feels…strange.

The flavor does something similar. It’s not quite a cheap lager: the malt and alcohol content veer this ale well away from it. It’s got some weight to it that prevents the beer from being one dimensional. Still, it’s light, and it’s got some similar beats- a heavy cover of a lager, if you will.

The finish is quite dry, too. There isn’t a big effervescent pop to clear things away and although that finish starts sweetly, the finishing bitterness definitely clears away the other flavors and leaves my tongue just a little parched. Interesting, though I’m not sure this is the best iteration. 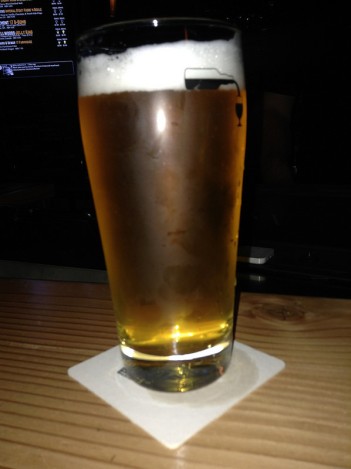 When I ask the man in a blue T with a Seahawks logo on it what he’s drinking, he starts to give me recommendations: “You know, I really liked the number 5, and…”
I wait and then ask again: “But what are you drinking now,”  and he apologizes.
“Oh! Well I’m having the #3 and,” he pauses dramatically, takes a sip of a nearly full glass, “you know, it’s pretty good.”

The #3 is the Stoup Citra ale and Stoup is a new brewery to me! So this is an exciting moment.

The hop nose is softly lemon and a little grassy. It wouldn’t surprise me if this beer was a fresh hop ale, given the way the nose works; not too strong, a bit more green.

I sip on it and the flavors buttress my opinion. I can’t say for certain it’s a fresh hop ale, but between the sweetness and the lemon drop finish that isn’t too harsh, it’s possible. There’s a stronger finish there that I would expect, though and it’s little dry, too. Maybe they used some regular hops in the boil to push the bitterness a little? It wouldn’t surprise me. Either way: I like this beer.

He asks if I’m visiting, I tell him I live here. I ask the same. And he says, ‘little of both; just trying to stay out of trouble.’ I extend my hand and he does the same.

Today’s second pint goes to Spread The Vote. In Oregon, the deadline to register is the 16th, so please don’t forget to participate!

Carlsberg has replaced the plastic rings that keep cans together with glue. Which is both really neat and the kind of problem that a large brewery could just throw money at to solve, as I mentioned in last week’s post.

But it’s a cool way to solve that pollution problem and as cans become more and more prominent as a vehicle to deliver beer, this is a clever way to solve the problem. Props were due: this is a good thing and we need more of these kinds of good things.

So climate change has been in the news this week. Which means now is as timely a moment as any to direct you towards this interesting article on (not quite) everything that is necessary to happen in order to brew a batch of beer at the Sapwood Cellars brewery. It’s just an overview but I don’t believe it’s difficult to see how these systems rely on one another.

There’s a lot of stuff that has to exist and work properly in order to create beer. Things that will be problematic, to put it mildly, in the future, unless we start behaving like we are confronting the crisis that climate change is.

Just something to think about.