I’ve managed to get six friends to come and see Avengers: Endgame with me, and we start off meeting at the Hawthorne Hop House. One of them is having the Lagunita’s Waldo IIPA and I think we all remember what I thought of that. 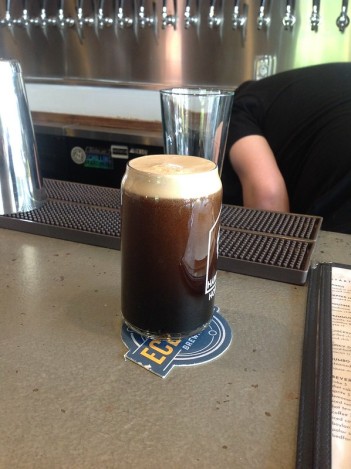 Another is having the Elysian Split Shot espresso milk stout, served on nitro. How the heck can I say no to that? Look at this beer!

For the most part, this beer delivers an it’s name and looks; espresso and milk flavors all the way down, and the nitro pour means that it’s very, very smooth. As the Split Shot warms up, a boost of caramel comes into the nose The finish roughs it up though, bringing a slightly acrid note. It’s faint and it doesn’t spoil the beer, but it does mar the overall experience.

It’s the only quality that does however.

Making and keeping friends as an adult is challenging. It takes a concerted effort to spend time with people, keep spending time with them, and trying to accept them as they change. Having six people who were willing to set aside time from their lives to come and see a summer blockbuster with me feels really nice. Like maybe I’m doing something better than I used to be.

We laugh a lot in the time before the movie and once there, found ourselves enthralled with the conclusion to one of the epic stories of our era. We even get a little time to talk about it after the movie…but honestly I think we were all a little overwhelmed. I certainly was! It’s not easy to take in the final chapter like that all at once.

But it wouldn’t have been the same without them, and after having more misses than hits on this theme, it is very nice to be out with friends and having a beer.

Today’s second pint goes to the Sisters of the Road cafe.

C’mon, I had to make the push, this week of all weeks.

I went with a friend to Assembly Brewing to try out their beers and, while a couple styles were out at the time, here’s what we had and a distillation of our thoughts on the beer. The mini reviews talk about the beers in the picture from top to bottom.

The Pale: Cloudy which is unusual…finish is a little rough-‘tastes more IPAish to me’ my friend said. The nose is lemony, citrusy, and we agreed that’s nice. This beer is a bit scraggly and feels like it could use some more refinement. It feels like an IPA.

LIVEPA (that’s the name of the beer): More orange tilted nose for me, also significantly sweeter. We’re wondering if the barkeep gave them to us in reverse order. “It’s more drinkable than the Pale, and it’s not crazy hoppy, so this is one I can drink,” my friend says.

A little darker than the pale, signaling some more toasted malts and maybe a little more sweetness. This beer is pretty drinkable and we dig.

Stout: “Roasty, little smoky, roasted over chocolate or coffee-coffee at the end, but nothing’s super bitter” Agreed, and it’s a very dry stout, and while the smoke element is different it’s not bad. A bit more chocolate appears comes up as it warms, but bakers cocoa, not sweet. The beer isn’t very heavy either, making it more drinkable.

Porter: “black licorice, but on the sweeter side instead of star anise”. This finished a little sour for me. A hint of coffee grounds…but it just didn’t quite call out to us.

We do agree that it’s a good space to be in, it has a pleasant atmosphere, unique style, with music that isn’t too loud. Definitely going back and with the place being so young, I think that the beer only has room to go up; the good ones to be great, the middlin’ ones to be good. Assembly is a recommended joint.

“Talk to me, what’re ya havin’?” The bartender has caught up to me before I’ve had a chance to even make eye contact with anyone else. I’m a little stuck for words, a rarity for me but I feel on the spot.

Sensing my hesitation, the bartender asks “what do you like?” He wants to recommend something, which is awesome, usually. Internally I’m having a slight moment of panic; I’m not ready to answer questions! And now the patrons on the rail have noticed that I’m doing a thing-which is nothing.

“I’ll have that,” I tell the bartender. Who smiles and replies,

“You do know that he lost his sense of taste and smell during the war?”

“Hey,” I say, “someone’s got to be the adventure monkey, and it might as well be me.”

Unfortunately, there’s no place on the rail for me to sit, so I find a nearby spot to sit down.

Waldo’s Special Ale is an IPA from Lagunitas. Looking at the board, it becomes clear that this is a double IPA, with an ABV off 11.7%. Whoa, right?

But….it isn’t good, either. There’s a touch of caramel in the nose, but no hops and the middle of the beer is cloyingly sweet. This goes down more like malt liquor than an IPA and I’m not sure if they didn’t let this beer finish out, or if the yeast just tuckered out well before it’s time, but something is making this beverage less than palatable to me.

(Ed. note: after a weekend of travel, I couldn’t make the Monday theme happen. I’ll catch it on Wednesday!)

Like all good residents of BC, we stopped at the Trader Joes in Bellingham on our way back from our last trip to the States. While we were there, and in recompense for putting up with all the other shoppers at Trader Joes on a Sunday morning (why weren’t they at brunch, like sensible people?), I was allowed to pick up a six-pack of Kulshan Blood Orange Gose.

And…it’s entirely pleasant! Which sounds like I’m damning with faint praise, but no. It’s got a nice nose, a good gose front end, and a pleasantly fruity back note. I don’t know that my nose or palate picks up “blood orange,” as opposed to a general sense of fruitiness. But it’s remarkably light and crisp, and something that makes the warmer days of spring more enjoyable.

I wrote not too long ago about about how I think breweries might be well served to focus on a few styles and have those always there, then branch out into other stuff.

Zoiglhaus is a pretty good example of what I’m talking about and this article on the Beervana blog talks about the potato ale they’re making, along with other obscure styles from history.

I like this for multiple reasons; First, the rotating schedule allows for those seasonal ales to be on long enough that the process can be refined and honed. As a consumer, that means I get better beer. Second, seeing revival styles is always a thrill for me and as an aficionado, valuing the history of beer and brewing is important to me.

But, you know….getting better beer is where it’s at and having those standard ale be the centerpiece of it is exactly what I like. 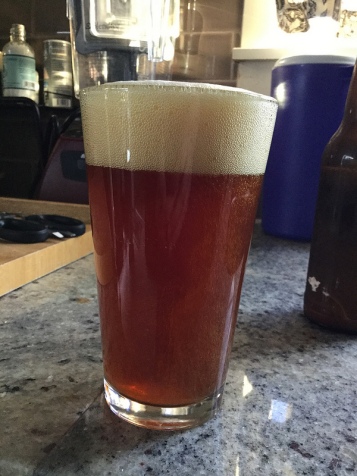 The nose on this is exactly where it should be. A little sweet, with some roasted quality to help balance it out, a bit like cooked sugar.

The malt quality, though; this is where it’s at. Following through with the scent qualities, there’s this strong malt sweetness that is exactly where I’d hope it be: carmalized sugar. Which means that there’s a tang of roasted quality there which keeps it all in check.

This beer is really good, and a great way to bring this experiment to a close. I will certainly use this recipe again, since it hits the marks well. This ale is drinkable as all get out and light enough for cool summer days, plus anytime in spring or fall.

The woman blocking me is having trouble with the door to Baileys-you pull on the handle on the left, you don’t push the center-but what confirms her state of mind, for me, is when she wobbles through the door and stops not two steps in to do something on her phone.
Oblivious and unsteady? Clearly not sober.

But whatever, right? I have to use the restroom and then find a seat at the bar…which just happens to be next to the woman who was in my way moments ago.

What the hell; in for a penny, in for a pound. So I ask what she’s drinking.

Hmmm…OK, there’s only so many IPAs on the board and I can tell that hazy IPAs are pretty much out.

As I start to unpack my gear I explain why I spoke to her and as I’m about to settle in and look at the board she says, “Are you gonna actually have a conversation with me, or are you just gonna-” and she makes a wave off motion with her hand.

I’m gonna have a conversation with you. It’s the first time someone has wanted to talk to me while doing this series in a long time!

Her name is Katie, and she’s visiting Portland from Sacramento to go to the Timbers game. “Because I love the Army,” she says referring to the rabid fanbase Portland has for our soccer team.

“But people here are a little arrogant,” she complains, “I’m fun! I have blue hair and tattoos! I should fit in here!”

I’ve had friends from outside the PWN say similar things-that we are a bit standoffish here and it makes it hard to connect, if you don’t know how to read the cultural landscape.

“Plus, I love animals. I’m an animal surgeon at UC Davis, which is like, the top place in the country. I save lives,” she tells me.

“But I don’t like strip clubs. It’s the only thing here that I am super uncomfortable with.”

Well, they aren’t for everyone but-

“You don’t get it, because you don’t have a vagina,” she says.

“I just don’t want to be objectified.” 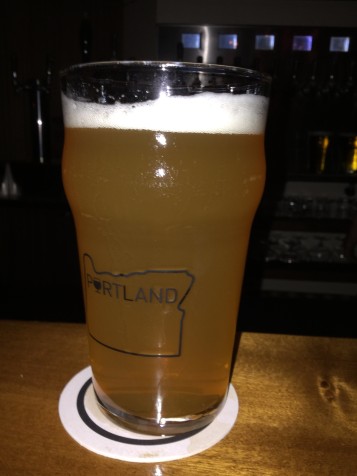 Katie slumps down a bit, halfheartedly waves at her friends. “We got into this whole thing on the way here, because someone wanted to go to a strip club and I just didn’t.”

Perfectly, OK, I say, there’s lots to do and no reason to engage in something that makes you feel uncomfortable.

“Right?! Plus, this place is awesome. It’s one of my favorite places to come in Portland. The beer is good and look at all the plants!”

It’s my favorite place to come, too.

I never did figure out what beer Katie had. But I ordered Georgetown’s Rockeman IPA, which was pleasantly citrus and almost certainly too sweet for Katie’s tastes. But for me, it did just fine.