This time I get to so something fun! I’m at Migration, and they have their Old Silenus ale on both nitro and regular CO2. So I’ll get to compare the same beer but with different effects! 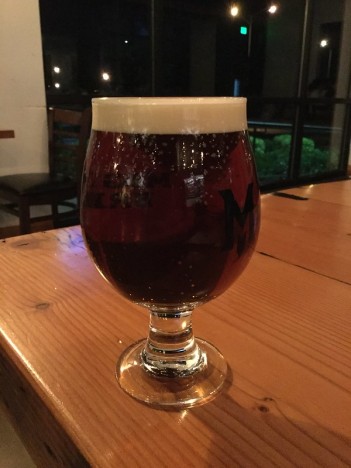 The first glass is on nitro; as with most nitro beers, I don’t get much in the way of a nose but the visual of a lovely caramel color and thick head is hard to beat.

This is a very smooth, malty beer. After a few sips, a hop bitterness slides in but it also lingers on my palate for awhile. This isn’t a flaw per se, but it does mean that for me, this beer starts to wear out its welcome a little faster than maybe it should.

Nonetheless, I like this ale and it’s very, very easy to drink. It feels a little weird to not have that effervescent pop on the end but it’s still pretty tasty.

The second glass is on standard CO2, and I’m really excited to try it. The opportunity to have the same beer served differently is unusual and something that people always talk about over beers. “But what if this was on nitro/regular?” comes up all the time and now I can actually compare!

The malt quality stands out in the nose, and the finish is sparkly. But it’s also a little sharper, with the hops having more of a presence than the nitro version. The sweet qualities don’t dominate as much so the bitterness stands out more.

What’s fascinating is that the nitro version is easier to drink, but I believe the CO2 version is more balanced. 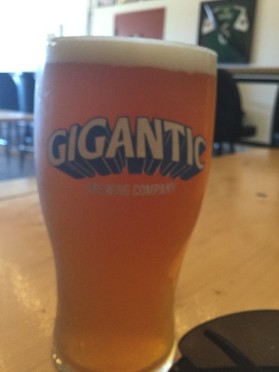 I was torn between the IPA and the Sassy Pony pale ale. But I went with the IPA because, oddly enough, it was a more balanced beer! Nothing wrong with the Sassy Pony; I think it’s delicious, but if I’m going to tell someone to come to Gigantic Brewing (and I clearly am) then the IPA is a fantastic representation of their work.

The nose isn’t too strong. Citrus, but not pungent. The malts are present but not cloying. It’s a really solid beer that is wonderfully representative of what a good IPA should be.

So why are you here?

You’re here because GIgantic hit the ground running with their beer, founded by two brewers with a ton of experience both in brewing and Portland life. Which meant that they were able to take some unique risks-and in this case, it’s wasn’t about the beer.

I’ll always remember Gigantic as being one of, if not the first brewery in Portland to make a serious push to have a visual brand that was unique. Employing local artists to make new labels for their beer, the art popped out to catch the eye before  it would catch anyone’s tongue. It was a moment that other breweries would follow, recognizing that the packaging of a beer couldn’t be ignored.

So while you’re here, take it in: they’ve got framed artwork of many labels used throughout the years and it’s worth looking at! The visual representation that Gigantic decided on helped their beer stand out, even as the labels themselves had wildly different looks.

It wasn’t long after that when I noticed that other breweries starting to do visual rebrands of their own. None of them were as daring as Gigantic was, but the idea that packaging really mattered? That is something that they helped bring to the fore, along with a beer to back up that cool art.

It’s no secret to anyone paying attention that not only is our planet under the stresses of the climate crisis. Worse, the current leadership in government seems hellbent on ignoring any of these problems.

It seems like the only thing that matters is how much money can be squeezed out before things become entirely unsustainable.

So, if it takes businesses getting involved in protecting the environment in order to produce beer, so be it.

Wayfinder Freiheit! Octoberfest ale. Is this my first Octoberfest of the year? Quite possibly!

I don’t get much nose and the first sip feels thin, with a bit of malt kicking in about halfway through.

That’s…odd. But as I continue sipping on the beer, the malt qualities start to sit up straight and make themselves counted. The nose is still pretty weak, but there are touches of bread dough there.

I was a little worried to start with, because the beer was so thin-the initial feel and even flavor resembled something near flavorless. It is a bit of a relief to arrive at this beer and find out that there is something there. A sprinkle of graininess, definitely on the sweeter side, and maybe a little corn at the end?

However, the finish is fairly crisp, and nothing lingers for very long.

I give my second glass a little swirl, trying to see if agitating the beer will release more aroma. It works, a little; I get some more corn to smell. But it’s not offputting, since there is a grainy quality and the finish is so damn clean.

Plus, the scent disappears quickly and what’s left is something that is similar to a good Plisner. It’s a really easy beer to drink. Decent, I suppose, with some tiny flaws that keep it from being good to great.

Today’s second pint goes to Live Through This*.

*This is the part where I disclose that I know the person who runs that, and she’s awesome.

Breakside has been making great beers, specifically IPAs, since they were founded. While they’ve built a business that includes many other styles-it’s summer right now, and fruit beers are prevalent- along with the hype for fresh hop beers soon to be tapped, the IPAs are consistently good.

Which is why I’ve gone with their standard IPA. It’s piney and has a little tropical fruit happening in the middle. The bitterness is a fine bitey thing that should go well with food but really suggests that maybe a second IPA is in order.

I recommend Breakside because of the exceptional beers, especially since IPAs are, no matter what anyone wants to say, still all the rage. Every brewery I go into has at least two, no matter how small the tap list.

So if you’re going to get an IPA, why not get some of the best Portland has to offer?

Breakside is going with an employee ownership program.

I like this quite a bit, because craft beer lives and dies on the local scene and the local involvement. Even when breweries get as big as Sierra Nevada, events come along to remind them that their local community matters.

So I appreciate the choices Breakside’s ownership made here, rooting further into the community instead of selling out to a larger corporation.

I had a glass of 54-40’s Crushed Velvet IPA and my brain just refused to talk.

So I’m giving myself a break for today and letting you know: the second pint goes to Together Rising.

There is one reason and one reason only to come here: you love sour ales. Sour ales caught fire in popularity a few years ago but this is a genuine moment where I can say that Cascade was doing sour ales before they were cool.

However, I don’t like sour ales. So why am I here?

Because Cascade has been a flagship in Portland for sour ales for close to two decades. Because one of the few beers in my life I distinctly remember came from Cascade: A cherry lemon quad ale, aged in Makers Mark barrels, the flavors of which peeled off like a gobstopper: first cherry, then lemon, then whiskey.

Now, all that said, let’s talk about the Honeycot, a blonde white barrel aged with apricots and wildflower honey, that has been poured on nitro. It is remarkably pleasant! Not very tart, but the presence of the apricot is definitely there. The nose has no sugar to it; a slight sting from the tart fruit qualities as I breathe it in.

The flavors remind me of a tart apricot with honey drizzle.

Which is not faint praise; Cascade does a lot of different sour ales and they run the gamut of tart and flavor: my friends are having cherry or marionberry aged beers some intensely astringent or very sour, and others mellowed and pushing tart, not sour flavors.

So you should come here to experience some of the sheer variety of what Cascade offers the beer scene in Portland. They probably have something for you, even if you’re not a sour ale person! 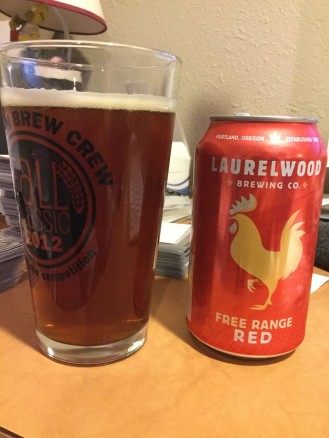 The nose has some caramel/roast qualities but it shows up a little late; there’s actual hops on the first few whiffs. Once those go away, though, we’re dealing with a red ale and by golly that is what it is.

It’s got a pleasant richness to it; the Free Range has a creamy quality that only fades after the effervescence which is persistent but not constant, comes to do a little cleanup. The head on this beer fades pretty quickly, but there’s a steady film of bubbles on the top.

What I like is that drinking this beer is similar to chewing on good caramel. It’s sugary but not overly so and the finish doesn’t linger. That clean palate experience means that I can line up another drink or nosh on some food pretty easy.

There Be Monsters is having a Japanese Beer Month so I thought I’d check it out.

But none of the beers from Japan are on tap right now. Instead I got Ruse’s Forever and a Day hazy IPA. What’re gonna do? 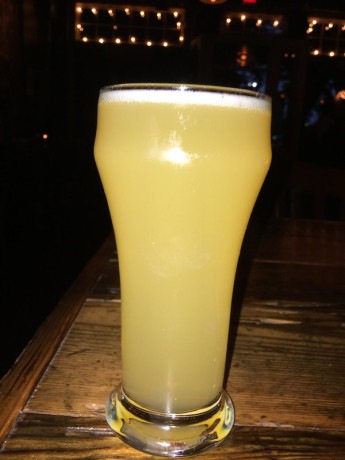 To its credit, the Forever isn’t pushing a pithy bitterness hard, and it certainly isn’t too sweet. Nevertheless, I feel that this beer is a spotlight on the issues I have with this style: when it’s too sweet, it’s just soda pop. When it’s too bitter, it tastes like part of the fruit you shouldn’t eat. When it’s in the middle, it lacks complexity. Honestly, I’m getting more out of this beer because of the truly delightful scent of french fries in the air, than I am from the beer itself.

Now, I’m mostly of the opinion that great or even good beer should be something you can drink by itself. No additions, no excuses, just: can I have a glass of this?

However, occasionally I do come across beers that, while OK, would definitely be improved by a slice of pizza. Or a chocolate dipped strawberry. Or even blending in another beer.

I’m starting to wonder if this could be true of a style, at least as far as I’m concerned. That the baseline for hazy IPAs is that I should have some food, and it’s only the exceptional ones that can be drank by themselves. Perhaps I would be kinder to the style with this in mind.

Because this style isn’t going anywhere and this beer isn’t getting any better.

Glass two brings more of the same, except now the hop oils are coating my mouth. I can feel the oil scrape off my tongue as I roll it against the roof of my mouth.

So the pithy bitterness IS there…it just takes a little while to get going. The bubbly now becomes highly relevant, as it’s one of the ways this beer has to help clear my palate. But I still can’t escape it’s homogeneity.