Goose Island is always the subject of a lot of discussion amongst the craft beer people, in part because they were one of, if not the first, craft brewery that ABInBev bought. Perhaps they were just the highest profile brewery at the time-I don’t recall. While the pro side of this arrangement (we can drink Goose Island beer in Portland, they can produce more styles) and the con side (eventually, the macro-brew mentality will catch up and the beer will suffer)  of the argument can go on forever, the proof is in the pudding. So to speak.

So let’s try their IPA.

The hops smell stale, old oranges coming up. The finish keeps with the start, a flavor like wet paper coming to round it all up. It’s practically vegetal, like celery.

Note, this beer is in a can: It should last for quite some time, nearly impervious to  light and air. That leaves heat and age as the likely culprits.

Because while I think Goose Island is a brewery that people should have conversations about, re: their ownership by ABInBev, and especially what that means for the quality of their product in the future, it’s difficult to have that conversation when I’m reviewing a beer that is so clearly off.

The notation on the bottom of the can lists 12/15. Four months in the can shouldn’t have that much of an impact, should it? According to my brief research on the internet: no. Four to six months, assuming you’ve kept a can of beer under proper conditions.

Which leaves some other weak link in the distribution chain. And that sucks, because I dropped $9.50 for 4 cans of beer that doesn’t taste very good and it likely doesn’t taste very good because didn’t do their job. But you know who I’m holding accountable for that? Goose Island, because they have all the support of the biggest brewery in the world now. There is no reason why their product should reach shelves in poor condition or stay on them after their date.

I decided to treat myself for my birthday (a few weeks back) and buy some beers for review. So here we go:

Belching Beaver-Damned double IPA. It’s grapefruity! There’s a half-hearted attempt at caramel in the middle but the nose and the finish shoo that along like a cat you’re trying to get out of the kitchen. I enjoyed it.

Sound-Old Scoundrel barleywine style. There’s a chalky quality to the finish which is really, really weird. It’s unfortunate because the nose has the perfect caramelized scent. That nose gets a little toasty too, as it warms up and is still delicious. It’s the best part of the beer, though, as the midrange just doesn’t feel weighty enough, which would be a compliment in a different style but here means that it just gets blown out by that chalky texture at the end.

Breakside- bourbon barrel-aged salted caramel stout. Hoooo, man is this tasty. The salted caramel ribbon runs under the chocolate and bourbon flavors quite nicely. The nose has the bourbon but not too much of it, so there isn’t a hint of the possible recoil that one might get from a really strong or harsh spirit.

There’s a pleasant effervescence to the stout which plays in its favor. This is a beer with some very rich flavors and the bubbly keeps the beer from being too thick.

The aftertaste is all coffee. It’s not too acrid or dark but it’s not very luscious or counterbalanced, either. I don’t dislike it but it is a letdown after such a robust midrange of flavors.

Stone Sotchasticy project HiFi + LoFi Mixtape. This is a blend and it’s not one that works for me. The nose has that woody funk from barrel aged beers, so I was initially hopeful.  The flavor and finish is all bitterness and more wood, however. Ugh.

Gigantic-Massive. This ale pours densely. Close to chocolate syrup, and it’s got that kind of sweetness, too. But it’s a lush, decadent ale, the kind you have when you’re saying, “I’m worth it”.

Grain Station-Bet the Farm IPA. This has a resiny nose that fades very quickly. Surprisingly so. It’s a little sweet at the start but that’s quickly replaced with a tongue scouring bitterness that make this beer difficult to appreciate. I’m starting to grok why people revolt against IPAs: if nearly every IPA I encounter refuses to balance then what’s the point? It’s just as bad as spicy food: if you have one dimensional food or drink, it really looses a lot.

Perennial Artisan Ales-Sump, stout with coffee. This beer pours thick, like chocolate milk you’ve added a little too much mix to. It smells like coffee beans, which is helpful since it also tastes like coffee beans. There are some sweeter, caramel notes in there, which is good and I wouldn’t go so far as to say this evokes the chocolate covered espresso bean flavor that Elysian’s The Fix has, but it’s definitely using similar colors.

Royale Brewing pilsner-it is almost exactly what it is supposed to be. That noble hop nose with a  hint of corn, a beer that has zero aftertaste & wants to quench thirst, it’s all right in that pilsner style box. Buuuut the body is just a bit too thin. It isn’t that something in this beer doesn’t just jibe, it’s just that it plays into the US pils stereotypes. It’s close, but not quite there. 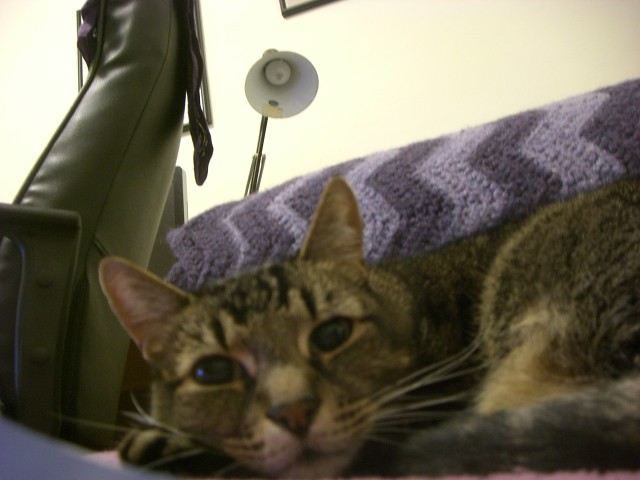 This is Sherpa, and yesterday we had to put him down. I’d known him for 11 years and no matter what I was writing at this computer, he showed up to insist that I provide some space on my lap for him.

He was a good kitty and he will be missed by everyone who met him. He was just like that, you know?

I miss my friend and I hope he knows I love him.

We’ll get back to the beer stuff on Wednesday.

It’s pretty simple: a couple breweries got together to protest an unfair law the best way they know how.

Sorry, folks. Happens to the best of us. I spent the weekend with NyQuil, doing a lot of work around the bed.

Nanofest, a beer festival spotlighting breweries that operate on 15 or less barrel systems, was last weekend and my friend Noah and I checked it out on Saturday.

I hadn’t been to Nanofest before but I thought it was pretty decently run. There was plenty of shade and water, in addition to free craft rootbeer or ginger beer for people who were driving. It also had a reasonable amount of seating, which was quite welcome because the event took place in the John’s Market parking lot-everyone stood on asphalt the whole time.

Fire Cirkl-“Dragon’s Blood” braggot-This has a weird nose. Chocolate runs through it but the finish is odd, too. Like chocolate sludge I’d make from chocolate milk mix when I was a kid.

Brewed by Gnomes-“Gnome Pale Ale” herbed pale-MEDICINE. No. (I did not finish this taster).

Noah wasn’t having much luck either. Cooper Mountain’s stout and Shattered Oak’s Dopple berry did not meet with his approval. I recommended to him Bent Shovel, because I’ve had their beer before and liked it. He, too liked the pale ale Bent Shovel had on offer.

Conversion-Wee Heavy ale-This was the first beer that Noah and I both got and we agreed: it was a nice malty beer. It didn’t bowl us over but we enjoyed it.

Wolf Tree Brewery-“Camille’s Golden IPA” golden ale-This had a nice and not overwhelming grapefruit nose and followed up with a similar flavor. It was a little dark for a golden ale but for an IPA? We’ll let it slide under.

Gateway Brewing-“Glendoveer Golden” kolsch-Corn farts in the nose and the flavor of sadness.

Overall I’d have to say that most of the breweries I tried need a little more work. I had avoided breweries like Pono or Bent Shovel because I’d had their beers before and enjoyed them. But it doesn’t seem like many of the other breweries have risen to their level of quality. Fortunately, they’re at the size that allows them time to grow and improve. I look forward to hearing more from them in the future.

So much about this looks good: smooth, steady head, nice, red, clear ale. But.

It tastes like butterscotch. There is really not much more to say about this beer. It’s flawed, and not just kinda-sorta. No, it’s just bad news.

It’s not something I can throw away, either…it’s bad but it’s not sickly bad and money is still money.

But damnit, it was supposed to be a pale. There is nothing resembling that style in this beer.

A little research suggests that the yeast may have fermented at too high a temperature, so at least I can take this knowledge into my next brew with this yeast. All is not completely lost.

I’m surprised, because pitch temperature is something I’ve been paying attention to lately. I’ve been making sure the temperature of the wort is getting down to at least 75 F. I didn’t worry about getting it lower because I usually have to add another gallon of water to it, and that should drop the temperature down another five degrees, easy. Low 70’s, high 60’s is about where you want to pitch (most) yeast.

Nonetheless, this is a new yeast for me-Imperial’s Barbarian (Aside, this is how we know that this is a young company is run by men. Instead of calling the product something that tells you what it is for, as every other yeast company does, they call it “Barbarian”. Because that’s cool, right?) and that means adapting to what’s given, not what I believe I “know”.

Next time, next time.