Hey, it was hot last week and I needed some beer so I just picked up something I thought would be good. Plus, Deschutes has a good track record for me!

Nose has a persistent but not oppressive pine quality. Nearly halfway through the glass and I’m still picking some up

The finish has a strong pine quality, no question. It’s almost, but not quite, as abrasive as chewing on pine needles. However that’s not a negative; more evocative, because this beer is clearly trying to push the hop notes, even for an IPA. What is important here is that the bitterness has a very, very light sweet quality to override and that makes a huge difference. Some people might go for the mouthful of hops-sometimes even me-but balanced beers are often far better and I can’t resent a commercial brewery that is making an undeniably drinkable beer.

I’m here to offer my respects to the Hop & Vine, because it’s closing at the end of July. The owners didn’t think it was worth trying to keep this space when the last round of rental increases came, and now North Portland is going to lose a cool little eatery and bottle shop. It’s too damn bad.

I got a Drinking Horse Ochcoco Stout. 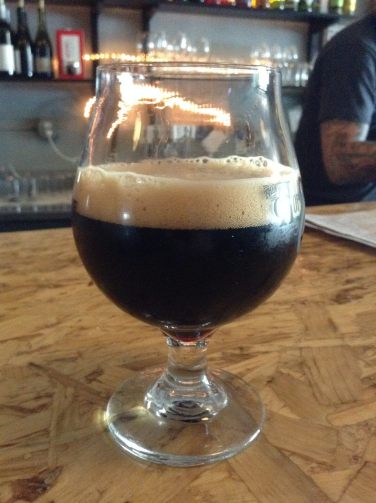 The nose on this is very strange, almost medicinal. It doesn’t carry over into the flavor though, so I’m mostly OK with that. However, I’m confronted with a beer calling itself a stout yet only hitting 5.8% ABV. So it rests rather thinly in my mouth, chocolate the most prominent flavor but it doesn’t want to stay. Easily pushed around by the carbonation on the finish, the stout isn’t very sweet, either. Perhaps this is shooting for a dry stout in the Irish style?

I don’t know that I care; nomenclature matters because I am a literate person who uses these things to understand what I am getting before I get it. This isn’t a stout. It’s thin enough to be a brown ale, for pete’s sake.

I know that I don’t hate this but I also know that I don’t want another one. As the beer warms up, a stronger coffee presence comes to rest on the sides of my tongue. It’s not as easily removed by the bubbly but I’m not sure that’s a positive thing. It just isn’t robust enough to appease me.

The afternoon is warm, the back doors are open and I can smell the smoke coming in from the patio from some kind of cookfire; it’s got the slight tang of BBQ sauce to it.

The whole city is grinding its collective gears on the inexorable rises in rent and how we remain a functioning city when all the people you need to make that city run are being squeezed out. An undercurrent of worry resides in Portland now, touching nearly everyone I know. We like this city but we don’t know if it’s going to allow us to stay. In the quieter moments, you can see that shadow over people’s faces, the kind that comes when you have to live with uncertainty for a long time.

Then a spot like the Hop & Vine calls it quits and that worry bubbles up; we need places like this, people seem to say, don’t they need us, too? 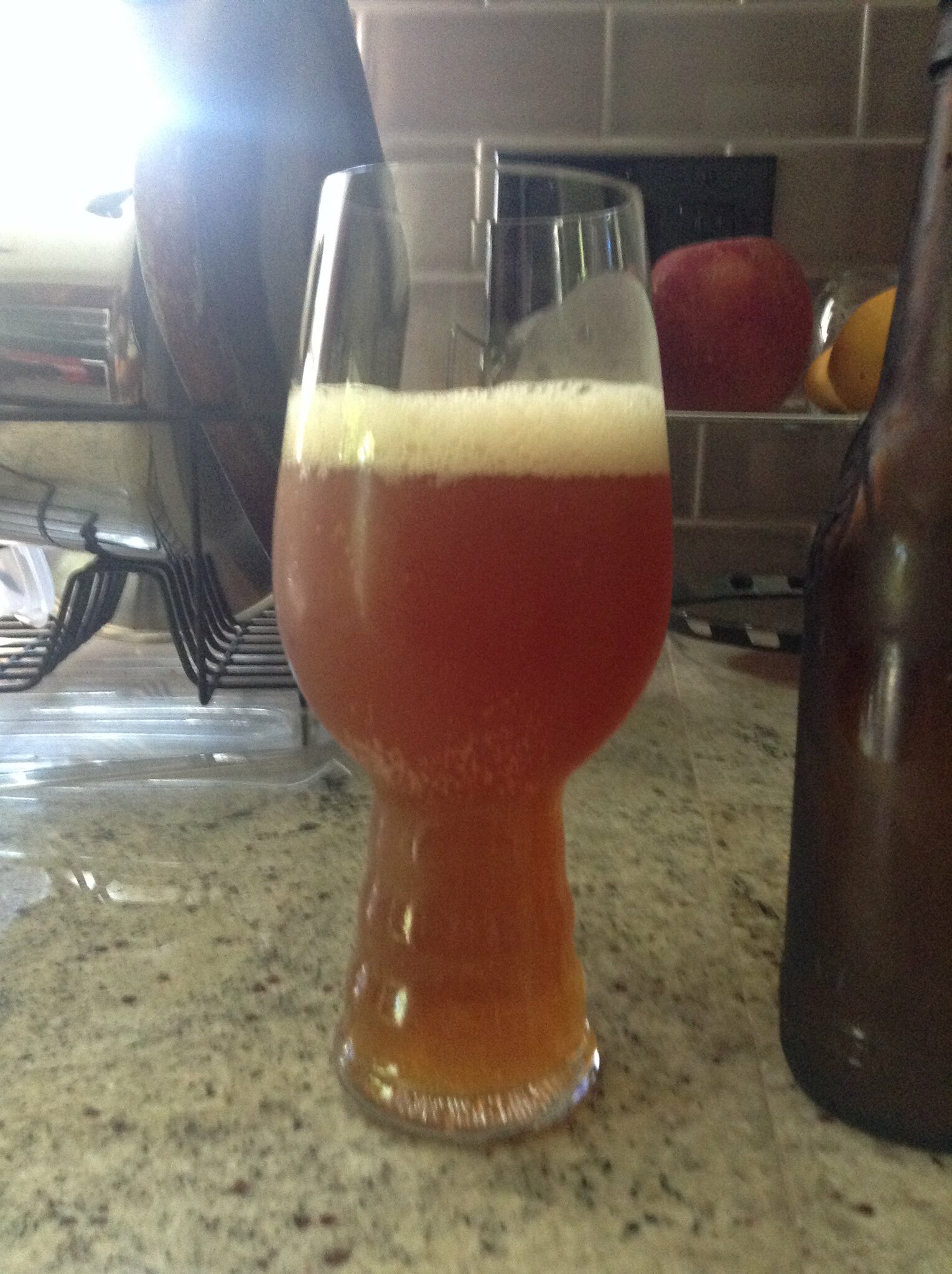 This is the latest swing at a pale this year.

The nose has just the barest inflection of hops, replaced instead with a bit of a yeast. The sweet-raisin note is there but it’s not strong.

The middle is practically nonexistent, the beer swept away by the carbonation on the finish.

I seem to be missing more than I hit in this project. Part of this is certainly due to the manner that I add sugar to the beer when I’m bottling. I’m currently experimenting with adding less sugar to the bottling process (2 cups water, now down to 1/3rd cup sugar) in order to prevent “over-conditioning” if you will. It’s a very fizzy beer!

That isn’t bad, exactly but it’s certainly distracting and that process may be giving the yeast more life than I’d like.

Yeah, today’s post is fuffy. I don’t care, I like this story. Every bar and brewery should have a totem animal.

This is a $14.80 stout from Beermongers, the Omnipollo Symzonia. That name is quite a mouthful and I’ll tell you up front, I went into the store looking for something recognizable. I thought that maybe I’d been doing this series all wrong, trying crazy beers I would never sample instead of just getting awesome beers that I wouldn’t ordinarily spend money on. I might’ve had a more enjoyable experience if I’d done that, so I wanted to rectify it all by finding a beer I knew would be good.

Then I saw this:

Look at that label. It’s AMAZING. I didn’t know who made this beer or what it was but I just thought that I wanted whatever was in that bottle. I can’t imagine being someone who would look at a label like that and not think “well, I gotta at least check it out.” If that’s not you, we probably shouldn’t drink together.

The scent is all soft coco; like sniffing from slightly but not quite sugared chocolate mix. It’s kind of a relief, to tell the truth, to get a noseful of something I like.

The beer is…solid. It follows up on the nose for the most part. But on the very, very end, there’s a streak of coffee bean, espresso like but a little more jagged. It’s not bad but it isn’t quite what I’d hope.

I’ve let the beer warm up for about 10 minutes, so it’s not rough because of temperature. And truth be told, the edge on this beer isn’t enough to put me off of it. It’s a small criticism in what is otherwise a pretty tasty beverage.

As it gets a bit warmer, the dryness of the coco flavors really starts to become prominent at the finish. Again, it’s not enough to put me off. The nose starts to get a little more floral, with hints of vanilla in there to bring up some complexities.

I dig it and I might even consider buying it again. 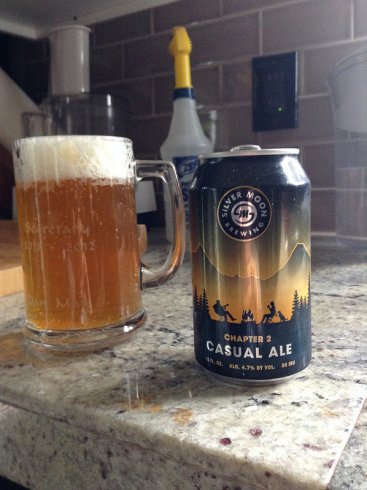 Silver Moon is a brewery that I feel like I’ve had before but at the same time, seems new to me. Portland problems, I suppose: I can’t remember every beer I’ve ever had. What I know is that the beer is in a can (plus!) and I haven’t written about for this series (also a plus!) so let’s give the Casual Ale a shot.

Although, that name. Really? Casual ale? I mean, I’d be good with that if I was then informed somewhere what style the beer was but I didn’t see that. C’mon, people: Provide me with information. More data is better than less!

Nose has a bit of resin to it but after a few sniffs and a couple sips, that nose just vanishes like fog under sun.

The beer itself is going for Very Thirst Quenching, so the finish is emphasizing crispness, while still wanting to follow up on that resin note in the middle. With an ABV of 4.7% there really isn’t any backbone to this beer to help keep it all together. The lack of sweetness in the middle means that the bitter qualities on the finish really override anything else and it’s offputting. I know that the Casual Ale wants to encourage drinkability but without a bit more sweetness in the middle, the hops make this beer unbalanced and less than pleasant.

I think I linked to the first part of this last year but there’s another post up and it’s really cool! This one is about a farmhouse brewery that had things custom built in the area in order for the brewery to function. 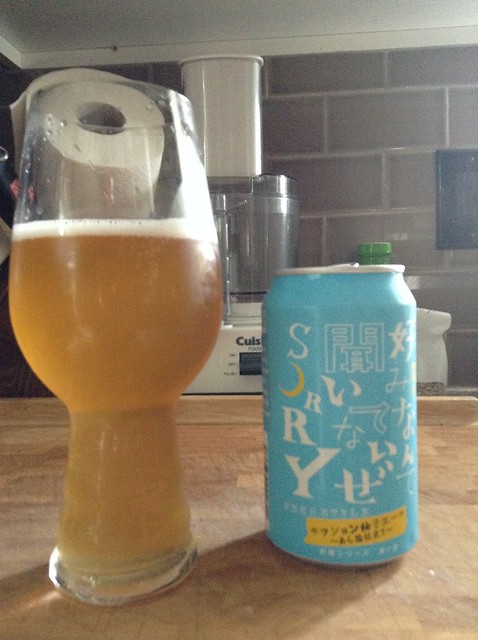 This ran me $4.75 for a single can. Granted, it’s being imported from Japan in order to command such a price so the real question is: Is it worth it?

Because after my last two beers, I’ll admit that I’m starting to feel rather dubious about this theme. Spending $28 on two beers I don’t like is not a good thing and throwing good money after bad makes me feel dumb.

The beer has a lemondrop nose. There is something salty about the scent, too. Like I’m sniffing saltwater taffy.

The flavor is pretty mild in the middle, with more lemon on the finish and again, just a touch of salt to it.

I’ve never had a yuzu before but based on the description, I’d have to say that this beer tastes like it’s supposed to. I’m not sure that it’s my bag, though. I do see the appeal in the summer months: whatever else I can say about the salt ale, it’s crisp and finishes clean on the palate. It’s precisely the kind of drink you want after you mow the lawn or while you’re sitting in an outdoor hot tub.

I think it comes down to availability: Because I live in Portland, I can get anything I want. A beer style for any occasion. If I lived in a city with less access to such refreshments, though? I can see this being a nice treat to indulge in on the hottest evening of the summer.

Really, it’s just nice to have a beer I don’t hate.

An interesting rule of thumb I came across. (Although if I store a beer for 300 days then something very strange is happening).

It’s looking a whole lot like AbInBev and SABMiller are going to become one entity.

My thoughts are: This is a Very Bad Idea.

Fortunately, someone with more experience on the matter has some thoughts, too.