I wasn’t really aware that there was a distinct version of the farmhouse ale style, but this article makes an argument that there is, now.

I’m not sure how far down that rabbit hole I want to go, but I did find the article interesting.

It took some convincing to get the bartender to tell me what his favorite beer on tap was. I’m asking him because he’s the on

ly other person at Imbibe, where I’ve come to pick up beers while I’m on the road.

I don’t fault him: His job is to find out what I want and give it to me, not the other way around. But I have a theme, damnit and he’s gonna help me with it.

Eventually he recommends Airways’ Sky Hag IPA, so I get a tiny glass. The Sky Hag is one of those scour power IPAs, where you can practically taste dry hops on the finish: extremely harsh there. It’s a little much for me but for a aficionado of IPAs, they would probably dig it. I wish I could get some scent off this but because I chose a very short pour, the effervescence is limited. When I agitate the beer, I get a little tangerine, but faintly.

He asks me where I’m from and when I tell him, we immediately start talking about Portland breweries and quickly hit upon Old Town Brewing being in the news. For those uninitiated to this story, here’s the super short version: Old Town has a trademark that the city of Portland wants them to give up so they can sell it to ABInBev.

This leads us to talking about politics (super cutthroat lately, he says) and monopolies (I have heard some stuff about Amazon from customers that I had no idea about, he tells me) as I tell him about Portland and the struggles we have to balance the needs of the city with the needs of its people. Things just seem unfair and nobody likes it when things are unfair.

Our short answer: some of those big companies should be broken up…

But who knows. We’re just a couple dudes at a bar. Soon, other customers come in and he’s got a job to do, while I have my own work to be done. Nonetheless, the conversation feels a little old fashioned, like something you’d read about in a knock-off Steinbeck novel. Just in a good way.

I walked on down to NWIPA to start the new theme and sat down next to a long haired dude in glasses and a 49ers jacket who was on his phone.

‘This,’ I thought, ‘might be more challenging than I thought’. 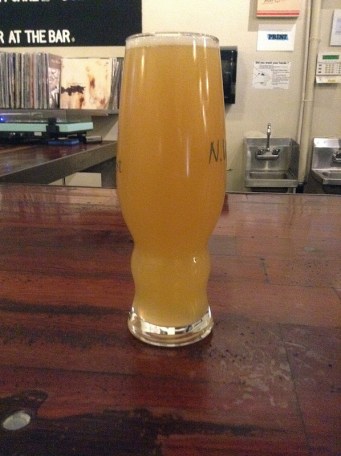 Still, I politely interrupted him and asked him what he was drinking. He told me it was Culmination’s Obscured by Clouds, said it was pretty good and went back to his phone after I thanked him.

The Obscured by Clouds is a hazy IPA with heavy grapefruit flavors. The nose, the mouth, hell, even the pucker on the finish all remind me of grapefruit. It’s almost medicinal on the finish; the kind of finish that would discourage a child from drinking cold medication. I can’t agree that it’s really good, unfortunately; a little sweeter, a little more balanced, and I’d be on board. It’s been noted by smarter people than me, though, that you gotta stick the landing and this beer really doesn’t.

In the time it took for me to get my beer, the fellow whose suggestion I took polished off his beer and went home, thanking the bartender on his way out. If I was a person who went for signs, I might consider this to be an ominous one.

However, this is about doing the work.

It doesn’t take a genius to see how hostile Americans are to each other these days. I’ve got my own views on this-mostly rooted in classism and greed vs the rest of us-but part of the issues come from an unwillingness to listen to people, especially people who aren’t like you.

What else is there to do but to go out, ask a stranger a question, and listen to the answer? No, I’m not expecting to solve the problems of the world, nor am I struck with some kind of folly that would insist that what I am doing is important.

Every little bit helps though. So it’s time to bring back this theme and start talking to strangers again, even if it’s just for a little bit. Sure, there are a lot more phones than there were before which makes things more challenging, personally. I am likely going to be interrupting more people, regardless of politely I am doing so.

Still, I don’t want to be part of the problem. So let’s share some recommendations, alright?

The second pint project isn’t going anywhere, though: today it goes to the Library Foundation.

And finally: I’m traveling for the holiday, so this will be the last post for a week. Happy Thanksgiving, everyone!

Occidental Altbier: pleasantly roasted nose, and it rolls right into the mouth. The beer itself has a little bit of chocolate in there but I’m reminded of that scent that I get when I go to the homebrew store and put my nose into a container of biscuit malt. I like it.

This finishes really clean, with no aftertaste at all. I want to get a plate of nachos with this. Sushi would work too: foods that might need a lighter feel and less intense flavor would be well matched to this beer.

Occidental did well with their altbier and I’m thinking this would be a good one to recommend to people who aren’t well versed in craft ales. It’s tasty without being overwhelming.

My friend Miranda sent me this article saying “this seems to be in your wheelhouse”.

Because beer is a personal connection to the world that a lot of people have. (One of many, I hope). It’s not just a consumable product, it’s one that people have together; people talk about the first time they had a beer with their dad, or they bring out beer to celebrate or mourn and they do it with each other.

I do not live in a vacuum; nobody does. We live in a world that we have to interact with and have an impact on. This means that decisions are made, all the time, that can have a greater impact on us and sometimes we don’t even care about those decisions until they hit home.

So the ability to sit down with a beer that you can afford, that isn’t contaminated by bad water, malt, hops or yeast, that isn’t owned by a monopoly that forces its choice on you instead of your choice for yourself, is the kind of thing that can hit people where they live. It should matter to everyone what the monopolies do-not just in beer, but tech, food, media; the list goes on. But beer-like most food-helps connect people.

I think it’s important to be aware of the forces that mega corporations bring to bear on our lives and if the consumption of beer is the way people get there, then I’m all for it. Because it isn’t-and can’t ever be-solely about the beer.

Although there are days when I wish it could be.

It’s the final night at the Commons: At midnight, they close the doors for an undetermined period of time, turn the keys over to Modern Times and…who knows what the future holds? So I close this with their flagship ale: the Urban Farmhouse.

The first surprise of the Urban Farmhouse ale is that the nose is a little sweet. It’s pretty rapidly subverted by the drier, funky quality of the beer but for just one hovering moment, there was a sweetness to it.

That sweet quality arrives again, somewhere in the middle of the drink. It’s almost got a little texture-as though it comes in with the wheat malt-but it’s a nice introduction to the next wave of flavor, which is just a little tart. Nothing too intense, more like a see-saw from the sweetness I just experienced. Then it finishes off with a sparkly, bubbly quality that almost feels like champagne.

I’m going to miss this.

It’s hard to understate, I think, the relevance of the Commons brewery in Portland’s history of craft beer. The story of a guy who started off in his garage brewing beers he would like and couldn’t find elsewhere, blooming into a business run out of said garage, blooming into…this. The Commons was the first brewery in Portland that I was aware of that focused specifically on Belgian and more relevantly, sessionable styles of Belgian ale. They produced something that we didn’t even know we wanted, until we had it.

Yet, every aficionado or beer fan I spoke to over the past six weeks has said the same thing: The Commons brought something to the beer scene nobody else was, and we found ourselves adoring what they were doing.

The scene has been enriched by the risks the Commons took-hell, I wouldn’t be surprised if breweries like Occidental, who do exclusively lighter German ales, exist because of the Commons- and we’re going to be a little poorer for it when they are gone. My glass is nearly empty and while I can’t say I feel a sense of loss for this being over, I definitely have a sense that a chapter is closing.

But, as they say, it ain’t over ’til it’s over. The equipment is being stored, not sold. The space is being leased, not demolished. Perhaps, and I hope the day isn’t too far off, I will be able to tell you about the beers of the Commons again. The risk this brewery took made everything a little better and I’m glad I got to come to the closing night.

The second pint goes to the Oregon Food Bank.

I just discovered this video series on the chemistry of beer. While I think the delivery is a little dry, the content lines up well with what I’ve learned so far and could serve as a good refresher or a great introductory piece for those who want to know how beer is made.