The Colossal Panthra IPA from Gigantic (a collab with Aslan brewing) smells like citrus and peaches. The peaches are a genuine surprise and the flavor profile tilts pretty hard towards a hazy iPA. It’s a bit on the sweet side and while that isn’t my favorite thing, this beer is pretty drinkable.

I’m still out here on my porch, even though most of the pubs have opened in one capacity or another. It only seems reasonable given the state of the country; going out feels bad, mostly because I’d be subjecting someone to a risk they shouldn’t have to take.

Which brings me to who’s responsible for this mess…and Beau’s video about the Democratic platform turning off 2A swing voters.

I always mocked single issue voters. Abortion. Guns. Homosexuals. These things seem like incredibly stupid issues to make or break a candidate, especially since the choice is between fascism and not-fascism.

So, this is the part where I realize that everyone is a single issue voter-that’s pretty much how we make any kind of decision, right? one reason. ANY reason. But one is all it takes. It gets a little harder to begrudge people their issue, when I realize that. I can criticize their perspective but that’s a different animal.

I won’t lie to you: Biden doesn’t thrill me. Harris was a savvy VP pick but I can’t say I’m excited about her, either. I’m very, very weary of 20th century politicians going up against 21st century problems.

On the other hand, when people who have studied fascism, like historians and teachers, lived under authoritarian regimes, like immigrants, or witnessed dysfunctional countries, like reporters all say: “this is what the onset of fascism looks like”, well, the other issues I have (environment, fiscal justice, marginalized people’s rights, etc) they all take a back burner.

It’s fascism or democracy. That’s my one issue. I promise to work on everything else too, but right now this is the make or break.

I struggle to pick up fragrance from the Total Domination. It does finally show up: that soft pine blend that I’d expect from something proclaiming to be a NWIPA. Still, not exactly what you expect from the title.

But where the hops really kick in is on the bitterness. This one is juuuust shy of being a tongue scraper. In this regard, I’m a little surprised to taste the restraint that went into that: they didn’t hold back on the malt, so there’s a bit of sweetness to help convince me to drink more of this beer.

I have to say, for the hop intensity, this holds up pretty well.

My pal Fuz sent me this article about a new scholarship for Black and POC to get involved in the craft brewing industry.

Which is great, because the presence of those varying perspectives creates a better industry and also better beer.

Grixen’s ESB is a subtle beer; the roasted qualities are so rounded they might be chocolate. There is also a sweetness here but the finish is pretty intensely bubbly. It really polishes off the flavors.

I’d say you should try it, if the brewery hadn’t closed yesterday.

Bad things happen every year and no one is safe from the caprices of fate.

What is supposed to make the human experience different is that we don’t have to let the bad stuff pin us to the board forever. We have that capability-every kid who goes down in a mosh pit and is hoisted up by strangers knows that they do not have to be subject to being trampled.

And every stranger in a mosh pit knows; you pick up ANYONE who goes down. Doesn’t matter why they go down. Maybe they were an asshole and they got knocked down: it doesn’t matter. Nobody deserves to be trampled.

More than any year in my lifetime, I can see what happens when people just decide that someone isn’t worth picking up. That there is an ‘us’ and a ‘them’ and the ‘them’ doesn’t even get to be categorized as human.

I witness what happens when someone who should never be given power is allowed unaccountable access to that.

I mean…nobody was going to make it out alive, but that doesn’t excuse the wanton suffering.

It is a strange thing, to try and be a good person and yet also know you have to fight.

But if good people do not fight, who is left?

This post from Jeff Alworth is about a month old, but given the closing of Grixen brewing this Sunday, it still feels appropriate: because it’s bad.

And while the lens that I’m looking at the universe through involves craft beer, what I want to emphasize is that this is just a slice of what other industries and people are going through and none of is good. We rely on so much to make our lives as rich as they are…and a lot of the people who take on that work are being given the most difficult challenges they’ve faced. 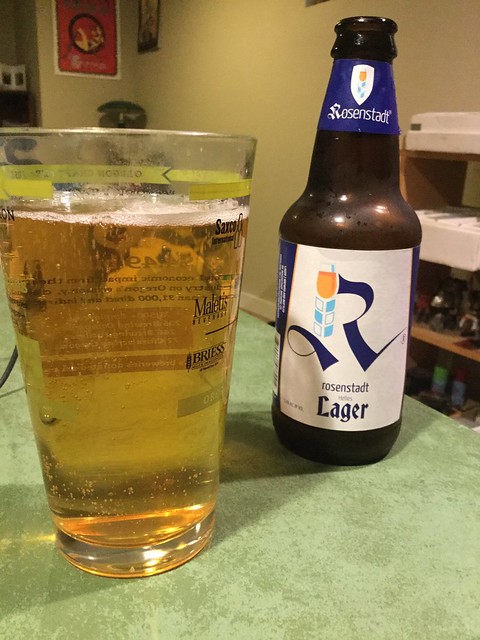 Lager is one of the more challenging styles for me to appreciate and this…honestly isn’t helping.

It’s weird, because Rosenstadt usually kills it on German styles, but the nose hits me sour, like water gone off, and the finish is the same. I am looking for a beer that is supposed to be exceptionally crisp, to give me some kind of hop notes-spice or floral-but nothing. It’s not even interestingly bready or malty, either.

This lager reminds me of the cheap stuff my Dad got in the 70’s.

So I try a second beer and I get a fresh glass, just in case.

This beer comes across a lot more neutral, for all but the last 2% of the beer. There isn’t any nose, and the middle has more texture than flavor-I can tell, at least, that I am drinking a beer and not just water lite.

But that finish…while the tip of my tongue has a effervescent sparkle feel, there’s still that sour flavor, high up on my cheeks, between my gums. I don’t like it. I don’t hate it, but I can’t be excited, either.

I feel like I could just as easily paid ABInBev and gotten a better beer. Or, Chuckanut and kept my money somewhat local. 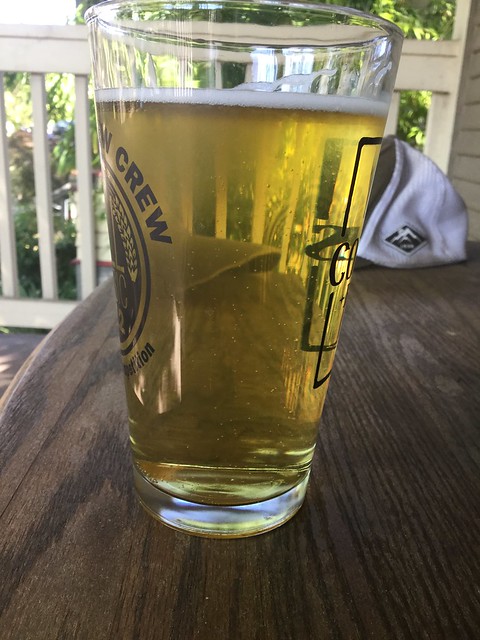 100 degrees today and I’m outside drinking a kolsch from Occidental, because that is the only acceptable outside thing to do right now. I should be inside. This is insane.

The kolsch has a bit of sourdough in the nose, while the beer itself has almost enough malt to it for me to think that there’s something there. The effervescence is steady but I’m pleased to say that even after the bubbly is gone, there is a hint of graininess, giving this beer just a little more heft.

I keep thinking about a clip I saw of The Nightly Show, just before it went off the air in 2016. One of the panelists said, of Trump getting elected, “The toilets will still work.”

When questioned on that, he said, “Look, all I know is, I press the handle and my poop goes away.”

This was meant to be comforting, a notion about how the fundamental structures that support us in America will still stand.

The USPS is being dismantled from within.

Even as someone who said to anyone who would listen that Trump’s goals were to make government as dysfunctional as possible and rape the treasury, I honestly could not have seen this level of malfeasance. I figured that I’d still be able to press the handle and the poop would go away.

Of the many lessons I’ve been learning over the past three years, it is that the structures that we rest our lives on don’t exist independently of us. We rely on them and when they work, we no longer notice them. When they fail, things like the tragedy in Beirut happen.

But Beirut didn’t just happen. There were warnings for five years about the dangers of something going wrong. Those warnings didn’t get resolved because of political reasons-a dysfunctional governance that figured it could kick the can down to the next guy.

One day, you are the next guy. The people who were certain that governance was the worst possible answer to your problems have dismantled your ability to actually solve the problems you have.

And no one is coming to fix them because the basic structures that would’ve supported action are eroded or gone.

We are being governed by people who want to take apart any system that might impede their ability to fuck over poor people.

The institutions cannot withstand such assaults.

We have to stand up for them, for each other.

for a simple can. 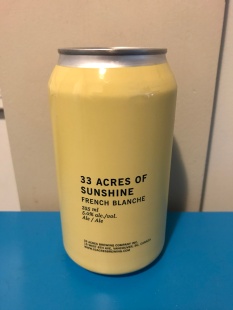 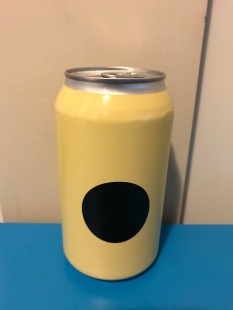 Let’s appreciate the fact that, in the face of cans reminiscent of 70s rock art or 80s neon fevers, we can have cans like this one, which looks almost painfully simple.  However, it captures the shape of the sun (the black dot), the colour of sunlight (“33 Acres of Sunshine”), and the (approximate) colour of the beer.

The best way to draw attention to yourself in this market might be to simplify. Perhaps this is the little yellow dress of beer cans?

Nose has a little bit of honey to it-sweet but also a little floral.
The flavors go along with that. It’s got a very strong malt backbone, which I like. The finishing bitterness isn’t very strong but it is just enough to keep any malt-sugar sourness pop up.
The

effervescence isn’t very strong and I’m not sure if that’s a flaw or not. On the downside: the olfactory elements don’t get very far but on the upside, it does just enough work on the finish to make this a quaffable ale, and no more. There isn’t a sparkle on the tongue as with some lagers, for example.
All in all, though I like this beer and I think I did well with it. Brew date: 5.16.20

The nose on Baerlic’s Hexa IPA is spicy and has a bit of pine. I’m already thrilled; there were times I would’ve punched a baby to get away from milkshake IPAs. Now I can just buy this.

Not to say the Hexa isn’t sweet at all; solid malt backbone here, almost fighting it out against the hop profile to make sure it can be tasted. But this is still an IPA and that means that the bitterness wins out.

The police in Portland are now the ones beating the citizens. So we’ve got that going for us, which isn’t nice.

It was a pretty brazen act of cowardly theater for our mayor to come out and get tear gassed by the feds, but now that they’re gone, be silent about our own teargassing us, slashing tires, threatening press, and so on.

I guess the mayor likes his police brutality the way I like my beers: local.

It’s discouraging. I know it. You know it. We’re feeling it. The future is coming, and very few of us like what it’s bringing.

“Oregonians don’t like to be told what to do,” I read recently, “they like to be asked to help.”

This was in regards to getting a flu shot for this coming flu season-which hey, would y’all please get a flu shot? Our medics are overworked and could really use any little thing you can do to help.

And any little thing to help…well, that’s important.

‘Cause people don’t like to be told what to do. But we do like to help. Most of us. Maybe even enough of us.

You don’t have to do all the things. None of us can. Very few of us can do big things.

But little things to help. Well, how bout it? Would you please do them?