And say that we just don’t need beer made from whale testicles. Or any testicles, really.

I know I gotta make a stand somewhere, and this is it.

It’s been quite a while–probably three or so months–since I’ve been to the Brassneck, and significantly more time since I’ve sat down to have a brew. But Mr. Bottle and I had time to kill between an art show and a play, and we were in the neighbourhood, AND there were seats available.

So down we sat to have beer and sausages. 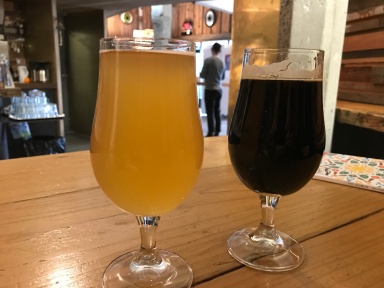 My beer was the Quibbler, a tart blonde with quince; the beer on the right was Mr. Bottle’s, the Dark Place, a barrel-aged porter with B. claussenii. After trying both, we each came to the same startling conclusion: we each liked our beers the best. Normally when we’re out, I pick for Mr. Bottle something he’d like, even if that’s the beer I’d most like to drink. I then try something a bit more experimental, and often find myself wishing I’d just ordered another pint of what he was having.

This time? Well,  Mr. Bottle’s beer was a perfectly fine porter with some brett in the mix, and…this time, I wasn’t a fan. It was fine; it wasn’t for me that day.

My beer was lovely in colour, golden and opaque, with an enjoyable nose (sourness, with a bit of the fruit coming through). The mouthfeel was juicy and appealingly rich–this beer has significantly more body than you’d expect. It’s also very reminiscent of the complexity of the fruit it’s celebrating, with perfume and hints of both apple and pear. I found the back end quite dry, but in a good way.

All in all, it was a lovely way to kill an hour. 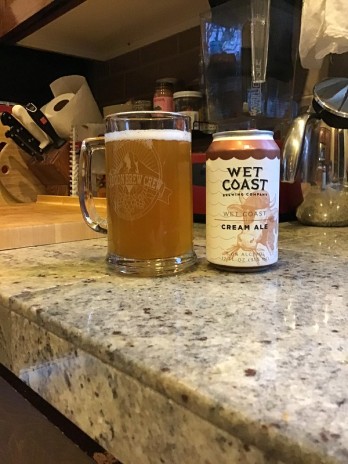 Time to wrap it up! (I…went a little overboard this year).

Wet Coast- Cream Ale (they were a new-to-me brewery, so I got a couple different beers). Faint hit of bread in the nose, but nothing too strong. The beer is sweet though; not sickly but definitely malt forward. The slight haze of the beer makes me feel not as bad about the cream ales I made, though this is clearly a better product.

Wingman-Stratocaster ale; a Belgian dark, kept on cedar planks. This is a fascinating beer; thick, with a hit of molasses. There’s a tart quality, too though-nothing very intense. Milder than any tart ale I’ve had, even the Flemish reds that I’ve had. But that’s a pretty good comparison. I dig it.

Northwest Brewing-102 IPA. WHOA that is a bright, clear beer. But the nose is faint and the finish is…grassy? Is this a fresh hop ale? I take a look at the can: ah. It’s 4% so this is a sessionable IPA, not an IPA. It’s not bad for that, but they’re damn lucky I read the label before passing final judgment. 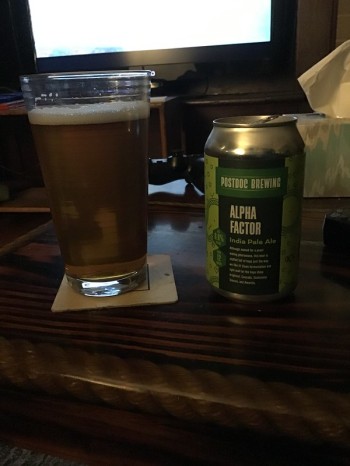 Postdoc Brewing-Alpha Factor IPAs. Nice nose-a little grassy, a little spicy and dank, too. The flavors are surprisingly spicy but they still keep that grassy quality on the finish. Still, it’s not quite grabbing me-the spice quality isn’t playing nice with the other flavors and I’m not sure I am eager to have a second. It may also be that the grassy quality is starting to taste a little stale, this late in the day.

Kulshan Brewing-Red Cap Irish red ale. The nose has some immediate roast quality to it, and wow, do does the flavor. I think the roasted malt got away from the brewers on this one, because its presence is so strong, it almost has a smoky quality to it. Not sure if I’d want another. 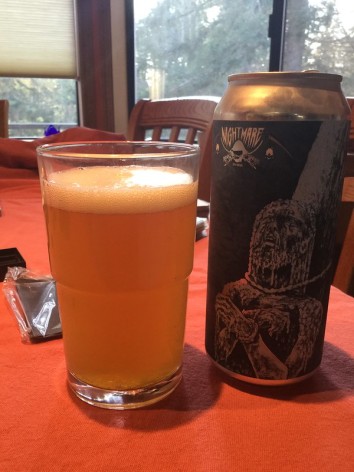 Nightmare Brewing: Exposure IIPA with cryogenic Mosaic and Citra hops. Look at this label. Holy crow. I bought it just because of that, and am rewarded with a fairly solid hazy IIPA! It’s not too sweet, but it isn’t so grapefruit oriented that I feel like I’m just eating pith. Nicely done, people!

Matchless-Hedelhell Helles lager. I do like me a Helles ale. However, this tastes like I’m drinking sparkling water, not a beverage with hops and malt in it. This is because I cannot pick up a thing on the nose, even after multiple attempts. All that leaves me with is what’s on my tongue and that…just doesn’t give me anything. Sorry. No dice.

Triceratops Brewing Co- Mrs Vorhees Peanut Butter Stout. Um..ok, so while it’s not bad, it’s lacking peanuts. Even though the beer says it contains peanuts, I do not taste them. But it’s a nice stout aside from that. Still, if you promise me peanuts, then you ought to deliver on that. 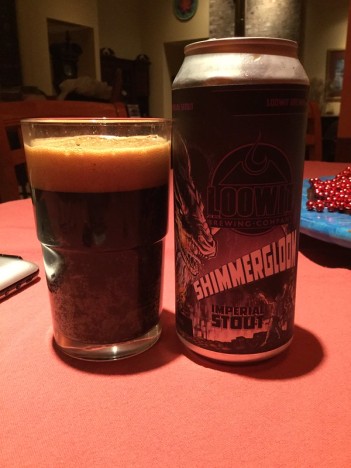 Loowit- Shimmerglow Imperial Stout-Some coco in the nose: this tastes like a stout. Coffee, burnt malt flavor and I dig it. Also, the can is amazing: it’s got a giant dragon on it. What more do you want?

Silver City Brewery- Old Scrooge Christmas ale. What the heck is a Christmas ale?Nose has some caramel, maybe a bit of red apple too. The beer itself has this as well. Not a lot of spice at the front but there is a lingering back end, hanging out at the back of my throat of some spice. This is getting better as I sip it and that’s always a good sign.

Airways– Pre Flight Pilsner-while there’s some  malt there, it’s just a bit too light for me to really dig on. Crushable, but tilts too far to the light lager family for me to endorse heartily.

Wander Brewing- Synthesiah Kveik IPA. I expected more, getting a Kveik yeast IPA because I’ve been reading about this yeast online-…but it’s just a hazy. It’s not bad, but I don’t get anything special out of it, certainly not $5 worth for a single can of beer.

The bonus of being on vacation: Lots of new beers to try! So here are the lightly edited notes, taken in between chats with family, a little television and a lot of card games.

Paradise Creek Brewery-Hop Pyramid IPA. Orange nose? It disappears so fast I can’t get a grip on it. The hop flavors aren’t too strong: lots of caramel flavors, with only a hint of hop bitterness. Feels pretty standard, and I wouldn’t be opposed to another. 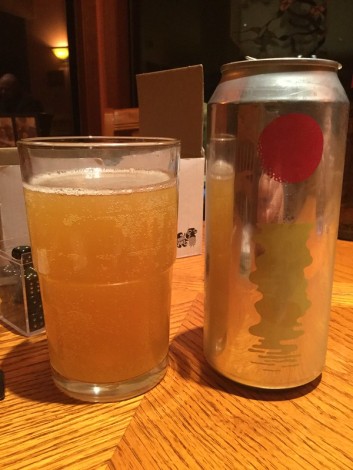 What is this beer? Who made this beer? Omnipolis-Fatamogarna? Iberia IPA? What wording there is could be a black metal album logo and the fine print is…well, fine. This is a weird way to market this beer. But it’s reasonably well balanced and not too sweet. I’m not just a little surprised by how tasty this hazy is but I am definitely baffled by the marketing choices.

Wet Coast Brewing-Soppin’ Wet wet hop ale. While the nose is hop forward and a little tangerine, I don’t associate that with fresh hop ales. Still; the beer itself is pretty mild and very juice forward. It’s not so sweet that I recoil form the beer and as a mildly juicy not quite hazy ale, I can get behind it.

Blackberry Farm-Classic saison: this is classic in every sense. Funky,  with a solid malt backbone to it. It’s a proper sipping beer, with just enough funkiness to balance out the sweetness. 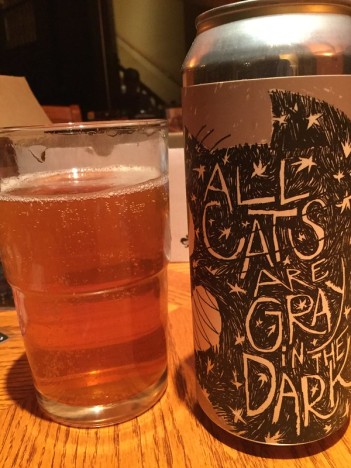 Fat Orange Cat-All Cats Are Gray In The Dark-blonde stout: this smells like goooood milk chocolate and holy crow it tastes like it too. Wow. I like it a bunch.

Two Beers brewing-Overhang Imperial Porter, bourbon barrel aged. Kinda like I’m chewing on a piece of wood. There’s a sour finish-is this infected? The nose seems smoky,  and then my friend says “The sound you’re making is horrible, so I can’t imagine that it’s good.” And he’s right-I am just not enjoying this beer, I’m trying to lick the flavors out of my mouth. It tastes like flat coke with rum.

Counterbalance brewing-IPA; this tastes like a classic, dank IPA. Not as much malt flavor as I’d like for balance, but a hop lovers delight.

I have to admit it’s neat that they’re using spent grains for cereal. The marketing is a little cheesy but what’re you gonna do?

Fortunately, you can have jam with that. 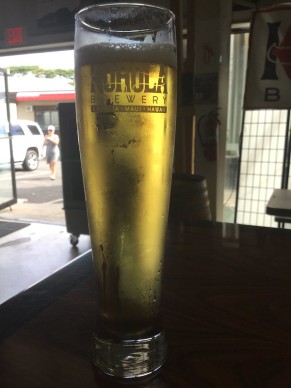 On the hottest day of the trip, I visited the Kohola brewery. This felt more like Portland: the brewery was located in a warehouse and behind some other buildings, so we had to go down an alleyway to get there. The serving area was blocked off by mobile guardrails and I could see the brewing equipment easily, with tubes running from the outside where the grain was stored, to the milling machines.

It was the classic ‘up and comer’ look.

I started with the Pilsner and it was a classic pilsner: little spicy, very clean finish. Can’t ask for better than that. It’s a great hot day drink.

Just to mix things up, I went for the Mean Bean Coffee stout next. With a chocolate covered espresso beans nose, this leans into the coffee bean addition nicely. But I’m glad I had a short pour of it, because coffee notes just don’t quite mesh with hot days like this, at least for me. It’s a fine ale, even holding its flavor as it warms, and finishes remarkably clean for the style. It just belongs to night time.

Last, I got the Red Sand Amber: this is a pretty damn solid Amber that has some coffee flavors on the  early back end. There’s a prominent malt sweetness though that is really working for me and the color is great. As the beer warms up, a hit of brown sugar appears and I totally dig it.