I was expecting to be at another dive bar but a friend suggested meeting here for a drink and I figured; let’s just kill two birds with one stone while I wait.

This place reminds me of Proof, actually, but it feels more open and warm, where Proof wanted to press me in. Both spaces have their pluses: Proof’s darkness is good for pretending you’re in a spy thriller, clandestinely meeting your contact to get you out of Hipsterville….

Eugenio’s feels more like a place to stretch my legs out. The presence of country music is probably contributing to my feeling that there should be a nerf gun shootout. 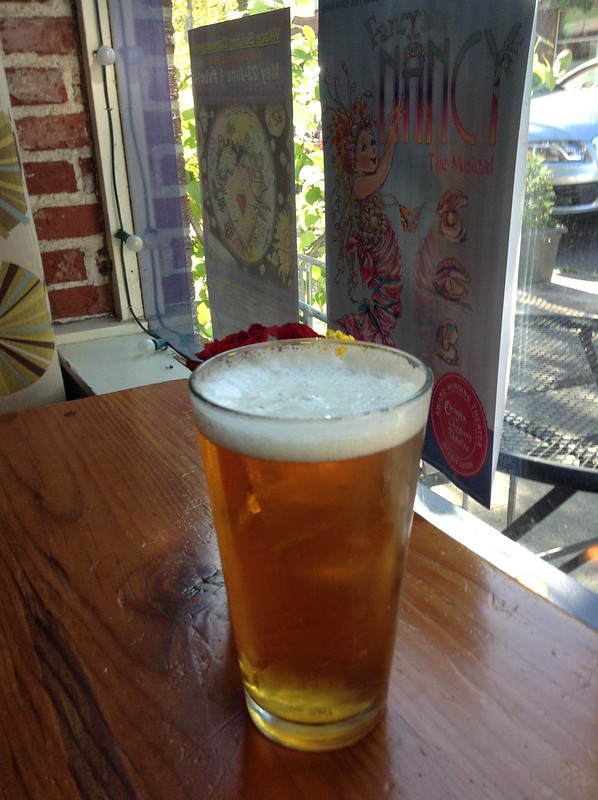 The Hop Valley Pontifex IPA is a biter. Pine nose and then a peach/pine wrestling match at the finish. It isn’t bad but I’m not sure that it always works. The kind of beer that I’d want to pair with something munchie; cheese, especially, comes to mind.

Part of me wishes I was at the dive bar. The one I want to go to is downtown though and it’s a week of parades and sailors and I want no part of either. Too many people, too much ‘celebration’, not enough quiet darkness to resent the sun from.

I can’t imagine that theater remaining for much longer. Too bad. Surely to be replaced by tiny apartments and hipper than hip joints where fools like me can stretch their legs out.

In a time honored tradition, I am waiting at a bar for a woman. I am using that time at the bar to write the blogpost, though, instead of complaining out the state of things re: men v. women, or pontificate on life with the bartender.

I shall pontificate with you, instead.

I get the Hop Valley Citrus Mistress while I wait at Proof. It’s served, as you might be able to see, without any head on it and I feel that it really hurts my impressions of the beer. I can’t get anything on the nose at all! So what’s left is a liquid with a crisp mouthfeel and a citrus pith bite.

I can’t really endorse it but I also can’t blame Hop Valley either. By the time I’m able to agitate the ale to get any scent, the beer is starting to smell light struck! I’m starting to wonder if this is one of the India Pale Lagers that have been hitting the scene lately. It’s light enough and hoppy enough, that’s for certain. I just wish it was a little more well rounded.

As for Proof…well, I just don’t know that it’s the kind of place I can get any pontificatin’ done. It’s casual enough but I’m not sure Proof has enough time under its belt for it to feel like a neighborhood bar. It doesn’t have that ‘lived in’ feel that makes it comfy and it is too Portland to be high class and it’s too bright to tilt towards a proper date night place. Maybe if I had a group of friends to take over a table, that would rock.

I am going to have to take a week off of writing. Not because I lack content or because I’m geting burnt out on writing. I have to take time off because my right forearm hurts.

It’s a dull ache, extending from the upper side of my elbow but radiating down underneath my arm, down to my pinky, where it feels like I’ve dipped my arm in cold water, and underneath my upper arm to my armpit, where instead it’s a bit more pokey, like a splinter running up to my chest.

My hand is getting tired and I can tell that, at the end of the day, my grip is weaker than it was in the morning. It’s been like this for three weeks; I don’t know what’s wrong and I don’t like it. I’ve been laying off the videogames, making sure my posture is correct but I don’t seem to be improving.

Don’t get me wrong, I’m going to do it. Appointment on Thursday. But it’s money and time and who knows what else that I don’t really have. Then again, who does? Is anyone so pleased that they can just see a doctor and be happy that their lives and well being are, without question, being disrupted?

What’s even worse? I can feel a twinge in my left hand, right down the pinky to my wrist. Fuuuuuuu-

So I’m afraid I’m going need to take a week off. I don’t like doing it in this instance. Everybody needs vacations, of course, but I like producing content for the audience. Unfortunately, I’m just old enough to be smart(ish) about this, so…I have to take a break.

Like the song says, ‘can’t always get what you want’. If I’m fortunate and I hope that I am, I can find a way to heal myself and get back to doing the things I do best.

Until then, maybe you’ll join me in a toast. I’ve got Hop Valley‘s Polly, a honey ale which has a pleasantly hoppy nose-American hops, I believe, due to the pine quality-but is got a nice sweet body and a solid finish. Not too bitter but enough to keep the sweetness in check. A very good summer beer and one that might work for any occasion where you want an easy drinking ale.