I kicked off this evening with a 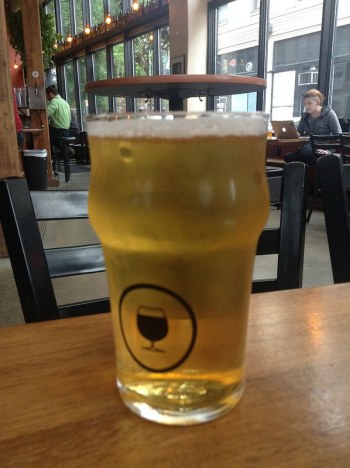 Sunriver Deseo Mexican style lager. This is your basic lager lager; faint but slightly sourish nose, extremely clear, clean, almost creamy flavors with practically no finish. I presume corn was involved in this beer somewhere, given a faint corn flavor. But. It’s a little dry and that is the quality I can’t figure out. Not white wine dry-the absence of any pucker in the flavors keeps it far away form that. I just finish this beer and I want some water.

That’s weird, right? At least a little? I’m glad I got a short pour of this one-it isn’t bad just not quite appealing for me. The woman who ordered it was clearly here as part of an after-business meeting so I didn’t intrude any further than necessary. Which meant I didn’t get to ask her much about what she liked about this beer. That’s OK: after weeks of having people involved, I’m enjoying a beer to myself, you know? It gives me some space to think and time to look at the menu to decide on my next ale.

There’s a nice selection of lagers, which isn’t surprising. It’s nice to see the rise of the lighter ales, after years of heavy beers, even during summer. Don’t get me wrong, I’ve got a double IPA I’m eyeing and there are still a few dark ales there, I’m just talking about where the offerings lean to.

Which is pretty cool; there really is something for everyone. The glory of craft beer’s offer of selection really being realized before my eyes.