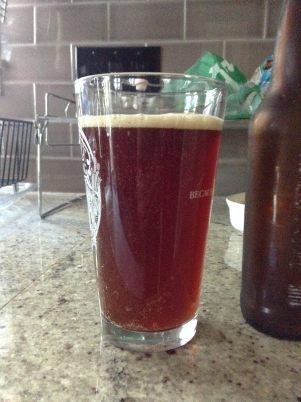 I like this amber ale. I know, I know, I titled this piece “So So” but I was pressed for titles, trying to make sure I had everything else in line.

The beer has a pretty solid head on it, which provides a little hop nose to it but not much. A whiff, if you will, nothing dramatic.

The rest is a solid red ale. Not quite malty enough for an amber, I would say but enough body to the beer that it won’t be mistaken for a pale. The C120 malt gives it just enough of a roasted quality that, like the hop nose, you get a whiff of it just on your tongue.

Pleasingly, the carbonation whisks everything away rather nicely. The ABV of this might be high enough that So So is a little dangerous, because the alcohol content isn’t notable while I’m drinking it. After three or four of them, though, I can tell that I’ve had a proper pint.