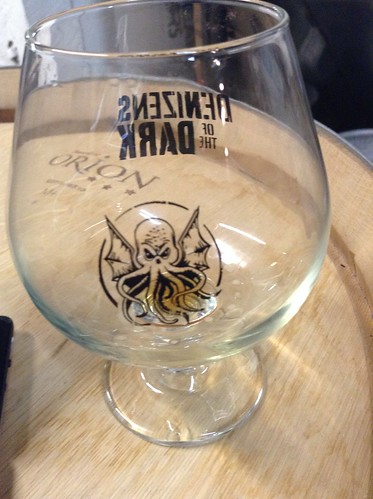 Fuz and I met up in Tacoma to attend Wingman‘s Denizens of the Dark beer event. It came with this rad Chuthulu glass and that was really all the excuse I needed to drink some dark, heavy beers. The mildly edited notes follow.

North Coast Old Stock: fruity, raisin, apple? Sweet. Not cloying. Dry finish. This has an oily, rich feel on my tongue I was expecting. But it pops on the finish, cleans up nice. Really, really tasty. 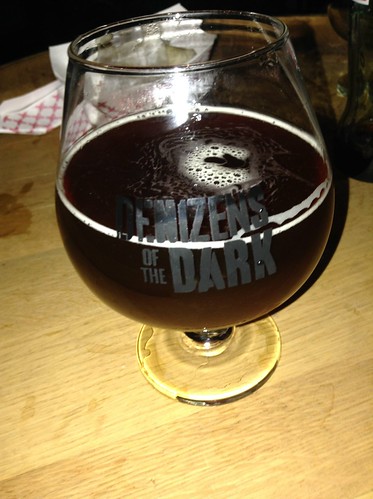 This beer needs to warm up, so I’m letting it. It’s got a woodiness to it but it’s not super dense, which I’m expecting. It is confusing me: I am expecting some viscosity, an oily quality and it’s thin. The oak character is there but I don’t want to savor this beer so much as just drink it.

Epic Big Bad Baptism: Holy moly this is good. Dark chocolate cocoa flavors all through, sllliiiiiight astringency a la coffee. Not much effervescence but just enough to keep it from weighing down on my palate.

And that was all I had!  Once again, the staff at Wingman was awesome and I’m glad I got to visit. Now we’re on to Friday and the Holiday Ale Fest. Should be a treat!

I hope everyone’s holiday went well! I was in the Seattle area and met up with Fuz with what little free time I had. We made our way over to Wingman brewing and I was able to hang out there for a little while, trying their single malt, single hop (SMaSH) beer, made with Topaz hops. I was even fortunate enough to talk to the brewer, who was serving that night. He was great and answered as many of my questions as he could in between serving others, so thanks to him!

Now, the Wingman serving area smells awesome when you go in, because it’s just a sectioned-off part of the brewery. The drawback to that awesome is that it was difficult to pick up nose of of the Topaz ale. As it warmed up, grapefruit starts to come out but it’s quite bitter on the finish from first sip to last.

In this respect, it’s difficult to evaluate the Topaz SMaSH; is it properly displaying the hops? Yes. Has it been paired with a malt to show that off? Yes (the GWM Pale Ale bag in the background was used). But I feel like SMaSH ales are frequently excellent examples of why we blend ingredients. The Topaz needs more flavors to counterbalance its bitter qualities and standard pale malt by itself just doesn’t cut it.

On the other hand, there isn’t anything wrong with the beer and these kinds of experiments are not only ones I approve of and want to support, but that I find educational as a drinker and brewer. How else am I going to really find out what something is like, if I don’t just go all in on it?

I don’t want to give the impression that Wingman cannot make a good beer, though. I took some sips from the P-51 porter that Fuz got and it tastes like a more well rounded beer, and it’s quite good. I tried their Ace IPA and found that to be more to my liking, again because I felt it was just a more complete beer. I also appreciated the willingness that the brewer had to talk to me about what he was doing, because that helped inform a great deal of what I had to say about the SMaSH beer and I look forward to visiting Tacoma again.

Which is not a sentence I thought I would write.

A few days ago, Fuz sends me this video, knowing that we’re both fans of Wingman‘s beer.

That’s pretty awesome to me on multiple levels: what (admittedly little) I know suggests that canning is better for beer and better for the environment so it’s great to see that happening on such a small scale.

Then, as a wonderful coincidence, I saw this story about the small scale canning operation itself. The more you know!

What we have here is the Stratofortress by Wingman Brewers and a brownie.

In many ways, this should tell you all you need to know about this beer: drink it with a brownie. The earthy elements of the cedar and rum give this beer enough bitterness that a brownie is really the best compliment. If you can convince a loved one to make that brownie with dark chocolate chips so you get the sweet with the bitter, then all the better.

Because that’s what I was lucky enough to do and let me tell you: it’s pretty high on the awesome.

Also, if you can convince a friend to go to (or come from) Tacoma with a growler of the Stratofortress? Do that too. (See the previous paragraph for why.)

It’s pretty much a tiny slice of heaven and you probably won’t even realize this ale is 11%. Which it is, so drink carefully, my friends. But drink it. I eagerly await my next trip to Tacoma to try more of Wingman’s stock, because this beer is a damn fine one and poured from a keg? I can hardly wait.

Added bonus: interview with a co-owner of Wingman.