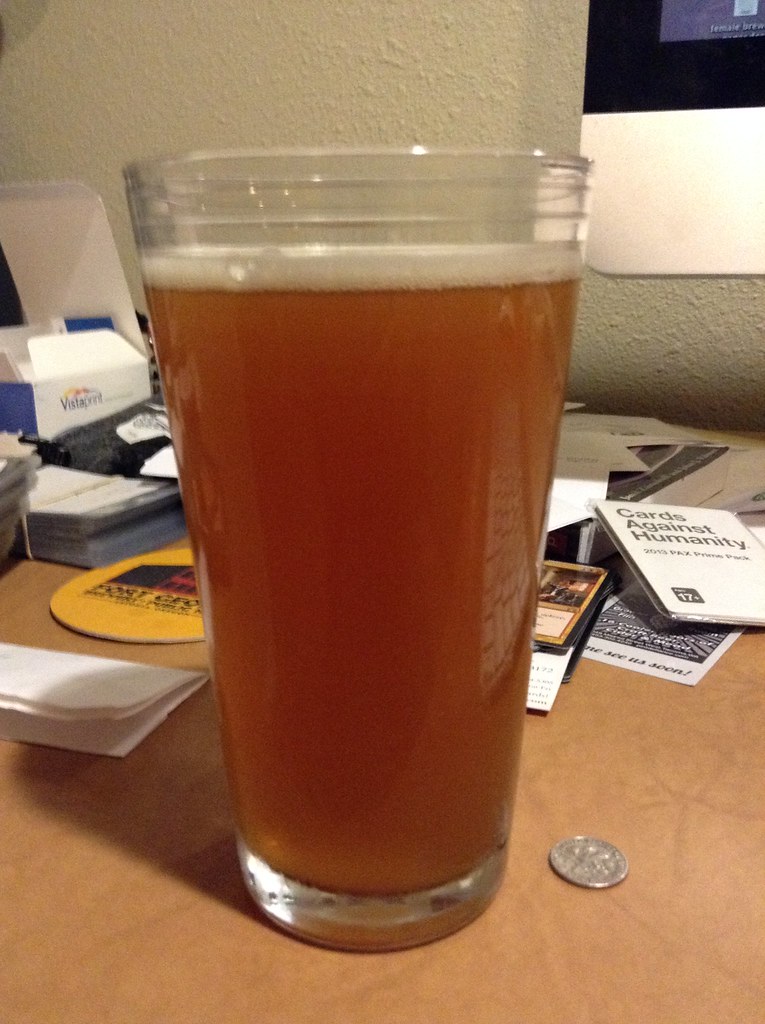 I keep making this beer and it keeps challenging me but this time, I think I got it right.

The trick was to add the tea in at flameout, so that it’s far, far less likely for me to get the acrid flavors from that tea. Previously, I’d been adding the tea with less and less time in the boil, going down to five minutes and I was still getting some unwanted bitterness.

This beer has a nice note of vanilla and chamomile to it and tastes damn good. There’s a solid carbonation running through it which is definitely a positive.

At the Eagle Eye. It’s a day of terrible food and ok beer and we hope for the bestest.

Still, I am in needs and I want to make myself known more at places near my living space. The only way to do that is to go there and have yourself a drink or two.

I’m less enamored with the tap list and the Upright #4 Wheat I’ve ordered is in line with that. It’s got the mouthfeel I would expect from a wheat, a bit of density I can feel around the middle and sides of my tongue but there’s a saison element, strong clove flavors from the yeast, I presume- that if I’d known was there I probably would’ve avoided it. I don’t think this beer is flawed, it’s just not for me.

I gotta remember to research myself in situations like this. I knew there were bottles before I arrived! I should’ve chosen one of them, because the selection of bottles is pretty broad, albeit focused on the major breweries. And beer from a bottle or can? Totally OK.

Food is…no. Don’t do that. I am rewarded with what I expected, though. It’s hearty. It isn’t good.

80’s-ish “rock” is on via the radio and this is not a place that suggests such music. The Eagle Eye is not pedantic and dull. There’s local art of the odd and possibly macabre variety on the walls. Big, shiny speakers are mounted on the wall to blare sound (which they aren’t doing but still,the potential is there!) The walls are in vibrant colors, deep blues, pale greens, yellows: all very rich.

I feel like there’s an identity that hasn’t been established here yet. It’s waiting for something, though I am not sure what. What I do know is that Starship’s “We Built This City” has no place here. Or anywhere, really but especially here.

The Eagle Eye is off to a decent start though because the beer selection is good and the staff is nice, so there’s a good vibe. The patrons seem to know the bartender and everyone is friendly, which is always a good sign in my opinion. She’s telling a story to the patrons about how she failed her driving test (short version, too many attempts to make small talk with the tester lead to distractions).

I just think it needs to embrace its weird side, instead of trying to be a little bit of something for anyone. Go full out. If the vibe continues to be kind, you’ll bring in the locals as well as the weirdos.

Since I had been using a yeast for wheat ales, I decided I would go one final round and make a final wheat-based beer. At the homebrew shop, I decided to add in a bunch of carawheat malt too, because why not? What’s the worst that could happen?

Well, since I have no idea what carawheat does, I suppose things could have gone very badly.  A little research suggests that carawheat can be added as 10% of the malt bill…and I went with 25%.

This ale came out a little odd. It’s not bad, by any means; there’s a faint funkiness in the nose but that doesn’t translate to the flavors and the flavor itself is very, very mild. But it’s also a little forgettable, and while I want to spin this as a good thing (a clean finish is a plus) it feels like a negative. It’s possible I’m being too hard on myself, that this is a beer with a slight flaw but really is quite drinkable overall.

I’m in the front corner tonight, and it’s for maximum relaxin’, I tell you what. Me and a Caldera Vanilla Wheat and it’s all good.

Although there isn’t much vanilla in this vanilla wheat. The nose is right out of a helles, hinting of skunkiness-heck, even the body is such, and as you can see, nobody could fault you for thinking this was a lager. Maybe in the soft edges, the midpoint curve of my tongue, there’s a hint of vanilla but it’s almost like a wardrobe malfunction rather than a congnitive effort.

I feel like leaning back. This corner is one where you can kick your legs out, if you’re by yourself. There’s definitely a ‘surveying my domain’ element, since I’m in an area which allows me to look out opon the two main lines of the pub that feels a bit princely.

Or, like I’m ready for the assassination attempt. I hear that gunslingers would sit so they could face the door, back in the day. It wouldn’t work so well at Bailey’s, to be a gunslinger: it’s impossible to sit in such a way where your back isn’t to some window.

There’s a lipstick print near me, on the outside pane. I like that. I mean, it’s gotta go someday but I like that someone was flirting enough to kiss someone through the glass. It’s pretty special when things like that happen to me, at least, so I’d hope that the recipient appreciated the effort.

There’s a bloke behind the counter who’s new: I’m told he’s offering samples of mead.  Cool, let’s try that. He’s a Blue Dog employee and at Bailey’s, on a Monday, he’s just a touch forlorn. Shame, because he’s a nice guy with good mead. He calls what he’s pouring the ‘wine version’ and he tells me that they’re making an ale version that should be available in April. Which is super cool, because I am sure I’ve had mead as wine but I don’t know that I’ve ever had it as ale. Something to look forward too, for certain.

The laptop battery is dying. I’m feeling a pressure: hurry, hurry, get this all down. Don’t lose your thoughts to the whimsy of laptop batteries. This is no way to lord of one’s domain. What’s the point of ruling if you don’t get to relax from time to time? My fault, of course, for not preparing in advance. Isn’t that always the way?

I suppose it doesn’t hurt that the Caldera is the kind of beer that you can pound. There’s no reason to sip this drink that I can think of and when I have the ‘hurry, hurry’ element going, well…

Hm. This is not technology serving me. It’s the Ferris Buller axiom: if you go too fast, you might miss it.  I think it’s time to unplug, appreciate the bar and have another ale, a sippin’ ale.

But I tell ya, you come here and have a chance at the corner table? Take it.

So, Fuz comes into town and we have a chance to get a beer.

What’re ya gonna do?

In a way, this is a preview to the 31st, when Bailey’s 3rd anniversary event happens. There will hopefully be more people in my party but Fuz and I will, in our own way, form the core of people there to amuse ourselves on interesting beers.

As a matter of fact, it’s him who points out the Cascade Imperial Wheat has a metallic flavor-an interaction, he thinks, between the wheat and the hops. Personally, I like what the wheat has done for the mouthfeel of this beer; it’s softer, a bit fuller, but the metallic sensation is a twinge off putting. Too bad, because I want to like this brew. Unfortunately for the both of us, Fuz’s Double Brown on nitro doesn’t fare much better. The coffee nose is a bit too strong for my tastes, and this brown on nitro just doesn’t seem to benefit much.

We’re a nerd couple tonight-Fuz is doing some work on his laptop and I’m doing this blogpost. It’s almost adorable.

I feel a bit calmer here. After the Local is done I think I’ll come back to Bailey’s again. Not just because the beer selection offers more variety; the space just offers me the ability to settle my mind and observer a little more.

Not that my adventures are done. Oh no. There are some wonderful places to visit and I don’t want to be found lacking-but it’s always good to find a few home bases.