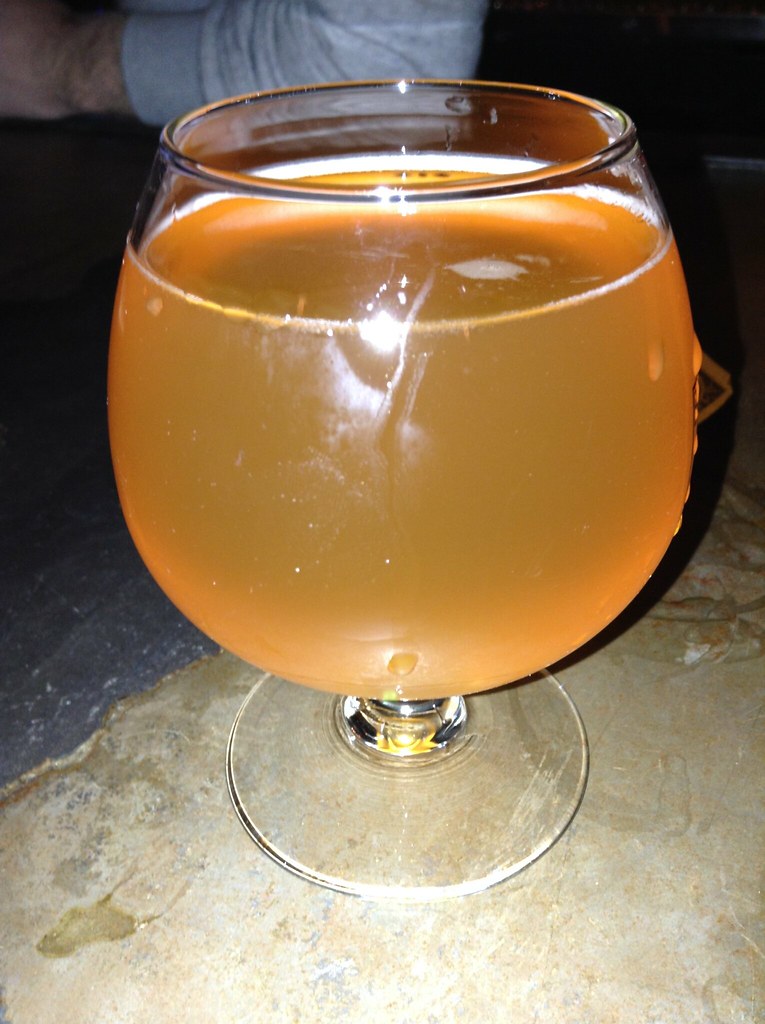 I’m tired. It’s a good night to sit at the bar, though, and sip Trinity’s Red Swingline ale. The title of “Wild India Session Ale” is total marketing speak. I cannot roll my eyes fast enough at such things. But the additional description of ‘coriander, tangerine barrel aged in French Oak’ I can totally get behind.

This is a sour ale but it’s very light on the palate. I probably got too much of it, though; my stomach is a little less than happy about the level of acidity. Still, it tastes very, very good, like tangerine soda. Or maybe tangerine white wine. I think I can recommend this, though for people like me (who might be touchy about the acidity), get the small pour.

Behind me I hear someone say:

“Well I think out here we’d form our own collectives you know? All that D.I.Y. shit we have out here. But you go to Kansas City and it’s gonna be every man for himself, man. Guns out and shit will be crazy.”

All I can think of is how liberal elitist bullshit that is. I don’t know what he’s talking about and I don’t really care. Humans; we’re not as awesome here or there. I quit listening.

I switch up to a Pliny the Elder IPA. I  think this is my last Elder. It tastes like orange gummy drops. If I wait long enough between sips I can eventually scrape the bitterness off my tongue. This is not an improvement.

I wonder if I’m getting old, being grouchy about the Elder IPA. This beer isn’t flawed it just hasn’t got any balance to it. Or maybe I’m just reacting to the hype. For something that people go out of their way to find and get really weird about when they see Pliny, I just don’t see the allure. I think this beer is ‘improved’ by its scarcity, since they usually only release it once a year. But the Trinity was tasty, so I’m calling it a good night. 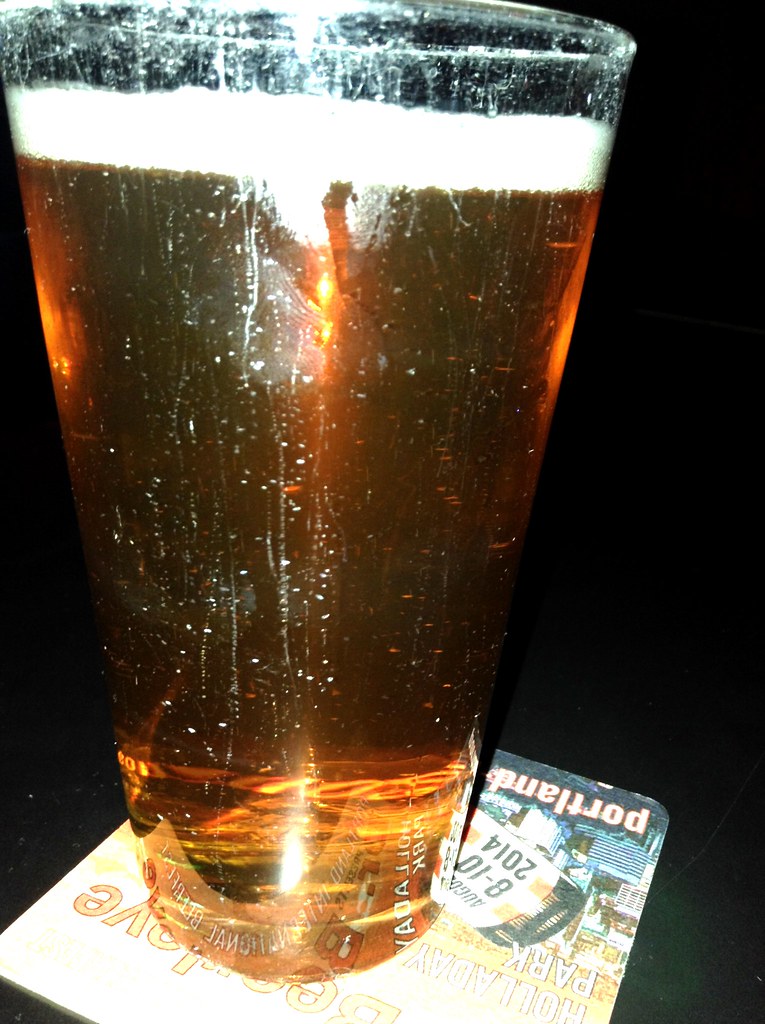 I have gotten the pale ale at Cascade but I barely remember it. I am entirely distracted by my opportunity to do one of my favorite things ever; show Portland off to visitors. Visitors who, in this instance, want sour ales.

While I’m not a huge fan of sour ales myself, Portland has a beer for pretty much anyone. On top of that, I’m lucky enough to know a thing or two about how sours are made so I can tell them about blending ales, the casks stored in the back and brettanomyces as a souring agent.

We just get to talk too. Des and her fiancee have come in to Portland to do work things: I am catching them at the tail end of their work and attempting to provide the semblance of a vacation in the two days I get to run them around Portland. Books! Ciders! Parks! Why the sun is so punishing here!

So we talk. And I do not write about the pale; I sip it and I tell them as much as I can about Portland. Where to go tomorrow, what was great today; I evangelize the city while they tell me about NYC and occasionally bemoan the lack of sour ales there. They argue over whether or not the Strand or Powell’s is the better bookstore.

For an evening, I am reminded why I go out to be at a pub: I go out for the people.

Vlad the Imp Aler. Who doesn’t want that beer? The bloke next to me ordering it has a blonde-touched-with-red beard and hair and he seems to be a sour beer enthusiast, which makes sense since I’m at the Cascade Brewing House.

I’m here in part because of the review I read at It’s Pub Night; though sour beers aren’t my passion a new place is a new place and sour beers are certainly a style that doesn’t get a lot of attention up here so it’s worth checking out. The Vlad isn’t too sour-tilts a bit toward tart instead-but it’s pretty good. Unfortunately, I don’t really have the vocabulary to describe sour beers properly since it’s a style I avoid. I can tell you there’s a dryness at the end which is nice, like white wine and that the front end has the sour funk scent that isn’t overpowering but definitely suggests the power of sour.

The bloke I’ve copied has had his attention directed toward a buddy of his; he recounts a trip he recently took to Belgium and his times drinking cool beers and meeting up at parties. There’s an agreement between the bloke and his buddy that Europe is more free than here, less uptight. These kinds of statements always amuse me because they are exactly the kind of calorie free observations made by people who don’t have to live in a place and get the dirt under their nails when it comes to living in a country.

Still; it’s always good to travel and see how the rest of the world tries to run things.

Anyway, I think I’m going to enjoy the rest of my brew and then head out. I think I’d like to come back here and try more brews sometime and see if there’s awesome beyond the Vlad.

This is the point when I stand up to leave-the bartender, a man in a baseball cap who calls everyone ‘Brother’ and looks like he was drawn by Steve Dillion-says ‘Come back when you can spend some time,’ and I assure him I will…this is the point when I feel myself up and realize; I do not have my keys. In a awkward, bad-at-physical-comedy way I touch my pants and pockets and jacket and chest and come up with no short pointy objects that could be considered to be passes to my vehicle and I say as much to the people cocking their eyebrows at me.

“Hell, brother, do you want another?” the bartender asks.

I do. They’re right there, on the passenger’s seat, gleaming in peach colored streetlight. Fuuuuuuuuuuuuuuu–

Defeated, I return to the bar and ask if I can use a phone, or be directed to one. The bartender smiles and loans me his shiny smartphone; AAA does not answer but thankfully my girlfriend does and ten minutes later, she has appeared with the spare key and a gleam in her eye that says ‘You owe me’, which I very much do, and I am able to return home.

Fuz and I made our way across the Burnside bridge and to the Portland International Beer Festival. Let’s just get right to it and break this down into the good, the bad and the ugly, shall we?

The good:
Mark Lanegan was on the speakers.

Flyer’s Sick Duck French Oak/Vintage Rum Batch V2 was a really good stout, with sweet chocolate in front, and bitter coffee to finish, so it was like drinking a chocolate coated coffee bean.

Rochefort 8 was one of the densest looking beers I’d ever seen. I could see the particulates floating in the beer suspended as though in something that wasn’t water, and its spicy qualities made me want to chew it. A meal in a glass, I think.

BFM L’Abbaye de Saint Bon-Chen 2006 was a sour ale the way sour ales ought to be done. Tart instead of sour, I wanted to have this beer with some fruit-based Carribbean dishes; pineapple and mango sauces over tender meats, but I was able to easily drink it on its own.

In all three of these cases, I wanted more than a taste of this beer. I wanted to be able to sit down with a pint and really sink my teeth into them.

The Bad
Someone thought it would be a great idea to have a cigar stand in the middle of the event.  So there were smug assholes smoking cigars everywhere I went; it was unescapeable. They all had the same look on their faces, too: I’m better and wealthier than you and I’m going to go home and have sex on top of piles of money you plebians, so get away from me.

I was never for the smoking ban at Portland’s bars until I saw people with cigars smoking.

The Ugly
First, the PIB took place in a one block area downtown so not only did the event fill up, it overcrowded rather quickly. While there was plenty of shade, there wasn’t much space to sit down and I was always in someone’s way or they were in mine. The servings were about what I’d expect, and the servers were having a good time but more than once I got in the wrong line to get a beer because they didn’t have clear postings about where you could get what.

And damn, if some of the names of those beers weren’t really, really long. What a pain in the butt to say if you’ve had a pint! (Yes, I know I’m complaining about something really silly.)

Finally, I paid $20 for a small plastic glass (they’d run out of glass glasses) and ten tickets. Beers ranged from one ticket to six tickets, and if you wanted something that really was ‘international’, you had to pay more for it. So not only did I not get that many samples of beer for what I paid, but I was surrounded by cigars at every turn, screwing with my ability to smell and taste the beer. Yay!

Fuz and I left as promptly as was reasonable and walked to Bailey’s where for eleven dollars total we both had pints of good beer, relaxing away from the crowds and the smoke.