It was a weekend of two stories, one that I didn’t see coming and was amazing, and one I had started to write before it was over and saddened me.

So let’s talk about the Superbowl for a moment. Because I’ve been watching the Seahawks for years and the team is different now. They won’t quit, won’t accept a loss. Will make anything happen to try and win.

So naturally, when the Hawks, down four, had the ball on the Patriots 3 yard line with under 20 seconds to go, I was nervous but not concerned.

I had written this story out. I knew Seattle had the game.

Except they didn’t. It’s a little weird, because I still feel it today, that sense of being wrong. How could I have fucked that story up?

Also, I’m going to be reminded of this on Tuesday because I owe someone a drink, now. Still, I’m fortunate enough to be able to pay for that drink and I like to think that I’m good natured enough that I can laugh this loss off, come tomorrow.

Saturday…Saturday was different. I had just left the Stormbreaker anniversary party (which had tasty beers!) with some friends whom I was going to give a ride home to. As we walked by a battered looking building with an open door, loud music could be heard coming down the stairwell.

“What’s going on up there?” someone asked as she wandered up the stairs.

Which is how I ended up crashing Grand Master Bro John Bryant’s 59th birthday party. I’m not making that name up; that’s what was on the flyers around the room.

As one of six white people at the event, it was impossible to blend in so I talked to strangers where I could, danced when the mood struck me and otherwise enjoyed an evening I never could have anticipated. I even got to spend some time with Grand Master himself, in his black suit with red pinstripes, red tie, red shoes and an impeccable black hat. I met him outside and joined him as he drove us around the neighborhood to the quick mart to break some $20s for change, so the bar at his party could keep going. He told me about how his family moved to a house “just a block down” when he was three, his family growing up on Mississippi Street. Watching it change from a place where “…you could just sleep out on the porch. You do that now, you’re gonna get yelled at.”

The owner of the mart smiled when Grand Master came in; “I’ve moved out of this neighborhood, but I always come back. We (Grand Master and his siblings) just sold the house where Mom lived, after she passed last year.”

Before the evening was over, I met Henry, Grand Master’s older brother, and Rita and Anita, his twin younger sisters. Along with a host of nephews and nieces. By the time it was over, I got the impression that it would be OK if we showed up next year.

So that’s quite a weekend, wouldn’t you agree? 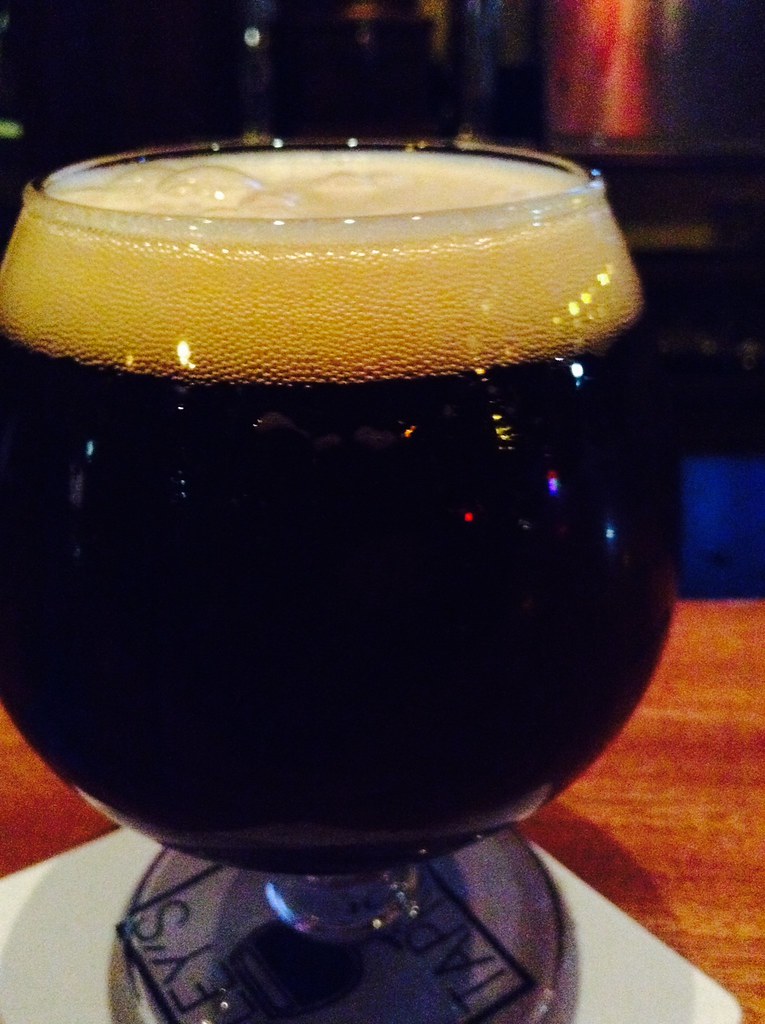 I decompress at Bailey’s. Bartender recommends North Coast’s ’11 Brother Theolonious belgian strong dark and I don’t think there’s any reason to argue. There’s a sweet, dark fruit note in the nose, like chocolate covered dates and it’s a hell of a beer. Smooth, dense in flavors with a light finish so it can totally sneak up on you. The alcohol warmth shows up in my belly which signals; be careful with this one but there’s no question in my mind that this beer is delicious.

I exhale. The weekend is over, the week is beginning and there are new stories to come from new days. The full moon is up and out and low in the sky: I might wish it was raining and wintery and January-like but I cannot deny the beauty up above. I exhale again, calm like the moon. I sip my beer and inhale; letting the babble of the pub fill my ears to blot out the diversions of today, the weight of the weekend.

The fellow next to me is visiting from Atlanta. We talk beer. One thing leads to another and now I’m introducing myself to Josh. The adventure never ends.