As I conclude what notes I had for my trip to Minneapolis, (which also included a beer run to Wisconsin, because Minnesota’s beer laws are weird) I’d just like to thank everyone I met (or re-met). It was very nice to visit and there’s no doubt in my mind that there’s a heck of a craft brewing scene alive and well in the area.

Brau Bros Moo Joos oatmeal milk stout. At some point a definition for what a stout is versus a porter needs to be clearly delineated. The styles are just so close, it’s hard for me to get a grip on what is what. Until then, I am sticking to my idea that a stout has stronger, denser mouthfeel. Oily, lasting flavors on the tongue. This beer has a very nice cold coffee nose, with a similar body: like an iced coffee on a hot day. But it isn’t dense; this beer drinks like a porter. The oatmeal does give the beer a chewiness that it might not have otherwise, but…I just don’t know. Do I knock it? Do I support it? It tastes good, at the end of the day. Why be a style fanatic? Try it, I say, enjoy. 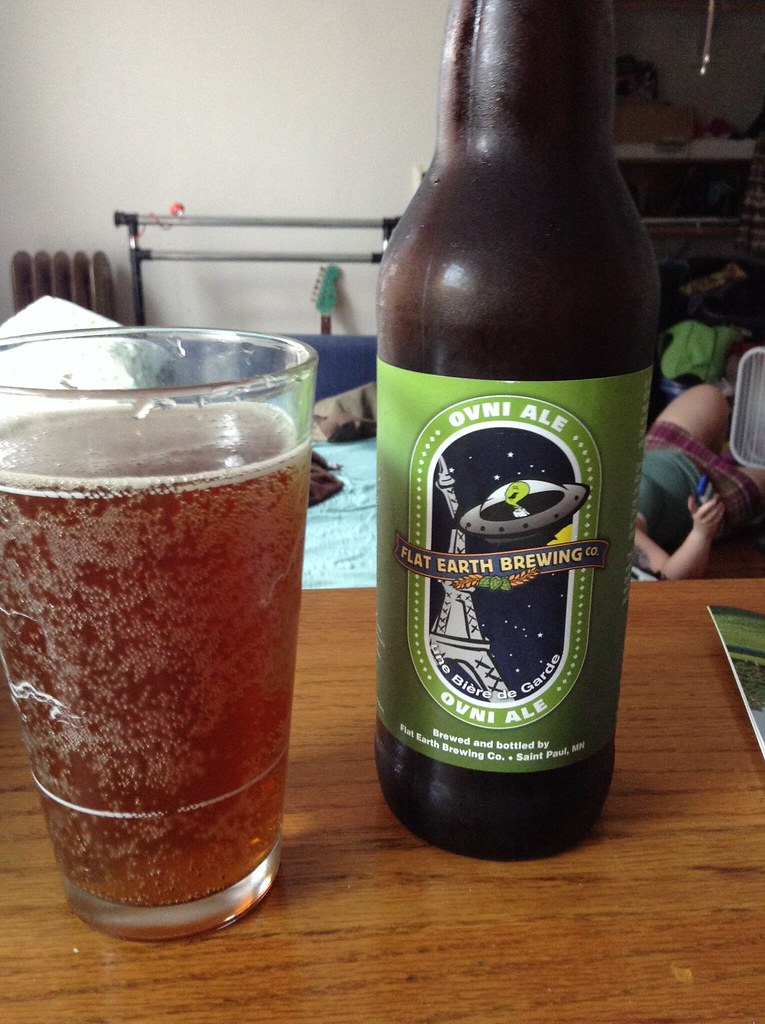 Flat Earth Brewing: Ovni ale, biere de garde (pictured). The nose is reminiscent of a saison, with its spicy but  little funky scent. The flavors correspond to this and the Ovni is light with carbonation that bounces the beer off my tongue so it cannot overstay its welcome. I have to confess though, that this beer suffers from not being quite as awesome as the Perry Street Brewing imperial I had last week, a beer that is too fresh in my memory. Is Flat Earth’s contribution bad? Not at all. It only suffers because my comparison is so recent.

Steel Toe Brewing: Rainmaker double red. The nose is pleasant enough; a subtle citrus thing and the color is amazing. But there isn’t enough malt flavor in there and the  beer finish tastes like lemon. I had some high hopes for this one because the chap at the store recommended it but it’s not balanced enough for me  so I’m just not thrilled. 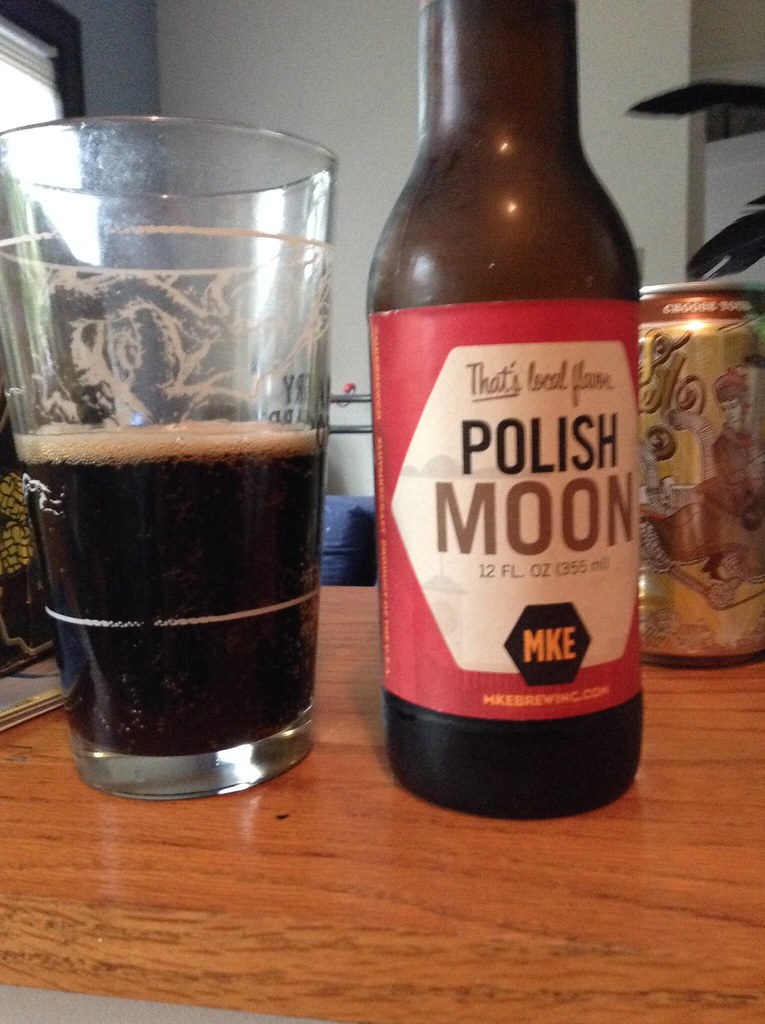 Milwaukee Brewing, Polish Moon milk stout (pictured). I have made a mistake at this point, not rinsing my glass before pouring this beer.  I’ve just had a Creme Brulee from Southern Tier and the flavors from the Southern Tier are just SO strong that they have bled into the taste of this one. That admitted, I would really like to mix those two beers now, because this drink tastes like a brownie.

Brunette Nut Brown By Nebraska: While I get that brown ales are supposed to be basic, two dimensional ales, lacking complex flavor profiles, this just lacks any real substance. I cannot pick up any malt in the nose, the midrange flavors seem to be nonexistent and all I’m left with is the finish, which is effervescent, yes, but otherwise unremarkable. 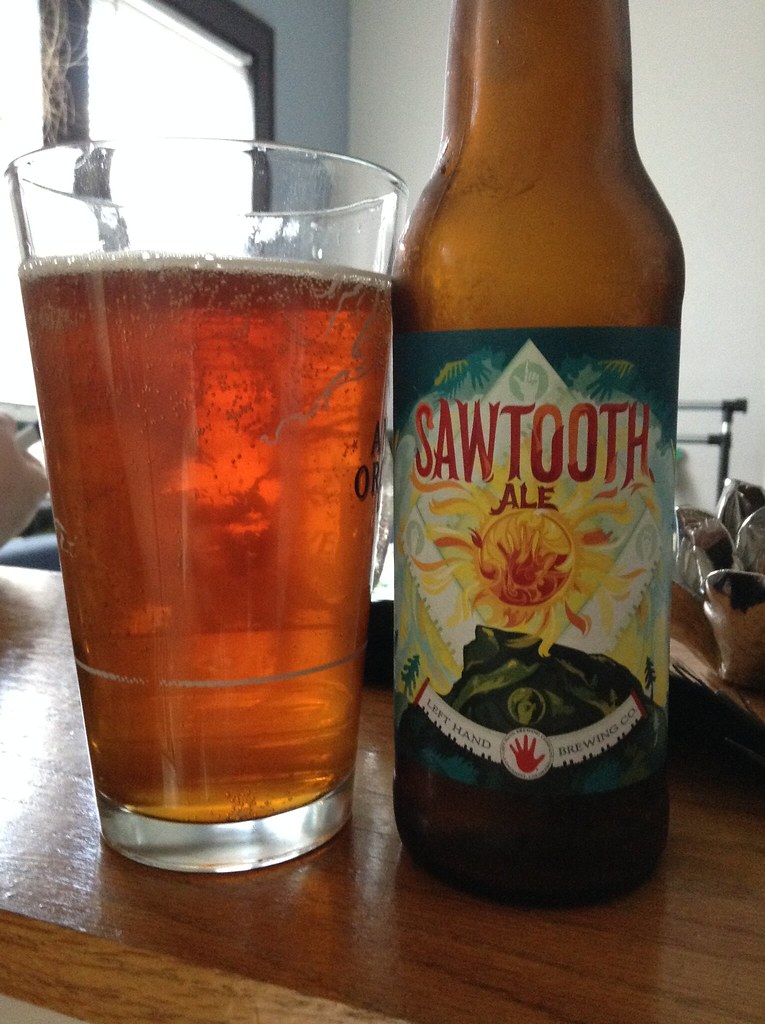 Left Hand Sawtooth ale. I picked up this offering from Left Hand because while I was in Wisconsin, the person behind me in line brought something by them up to the counter and told me they were great.  So when I needed onnnnne final beer to close out my trip and I saw this, I took the opportunity.

This is an amber ale if ever I had one. Faint caramel in the nose, with a soft stripe of citrus running around the middle but nothing too forward, too obvious. The finish is malty but crisp and though the head isn’t very strong on this beer, the effervescence stays and keeps this beer from lingering. It’s a fine amber, the kind I wish I could reliably find in Portland but just haven’t seen. Or maybe I don’t remember? That’s more likely.