My friend Sascha has invited me to his local: “The beer here is good and I’d like to hear what you think,” he said. Old Town Pizza, here I come!

The layout of this place is weird; balconies that are unconnected from other balconies, nooks and crannies connected via narrow doorways or walls that have clearly been moved to make space for people. It’s obvious that this used to be someplace else, maybe even two someplaces but what the hell it was I couldn’t tell you.

Old Town Pizza is the kind of joint that you’d have to be lucky to stumble on or live in Portland to know about. Because there’s nothing inherent to the name nor the look of the place that says, “We make our own beer and it’s tasty.”

Yet, here I am with their Sun Dazed Kolsch. 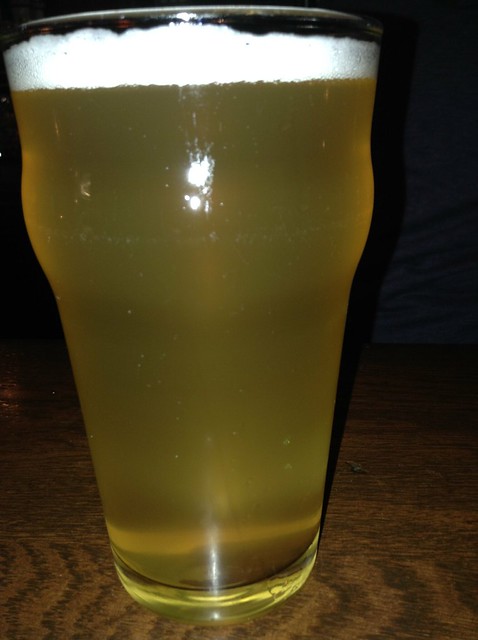 This beer tastes exactly what it’s supposed to taste like; it’s crisp and light with a bready note on the finish, the nose a little funky, like yeast on pizza dough rising. There’s a little nudge of lemon on the finish too, shouldering its way onto my palate like a child insisting on getting dessert. It’s a damn fine kolsch and I am enjoying it a whole bunch.

OTB may have stepped up their game lately. It’s been awhile since I’ve been here and I don’t remember the beer being this good.

Sitting here is unusual. It feels like the other people here have earned their space here already, familiar gnomes carving their place out of the social rock.  I’m at someone else’s local, a newbie who found a used cave and sat down. I don’t feel unwelcome but it’s pretty clear that the attention is rightly on the patrons behind me, waiting for crispy slices and that the regulars on the rail all have a relationship.

I haven’t felt like there was a community at the rail in a few stops. It’s nice to experience.

I’m taking the next week off, because I’ll be visiting family for the holiday. I hope everyone has a safe & pleasant Thanksgiving!

When I first moved to Portland, the location that North now occupies was a trading card store. Sports cards, Magic the Gathering, Pokemon, the whole range. It was nearby and a welcome relief to have someplace that offered something familiar to me in a city where I didn’t know anyone.

It went out of business and eventually became a juggling supply store. The juggling supply store was in business for years. Really. Way to long, given the number of people who might need juggling supplies. I always thought that the store was a front for the mob during this time. No particular reason, except that it appeals to the imagination. A mob storefront that sells bowling pins. There’s an absurdist story in there somewhere.

That store went the way of all juggling, balls dropped and the whole storefront area underwent a transformation, a massive facelift, really. In it’s place came the North, which I was an early patron of….and which turned me off pretty quickly. Too dark, seating arrangements all kattywampus, and worst of all…reggae music.

I really hate reggae music. Yes, yes, Peter Tosh and Bob Marley were sonic innovators, they stood for something, their music was a force for social change amongst other things.

Don’t care. Every single reggae song uses the one-drop, with the same tempo, women singing backup/harmony, and is, to me, boring to the point of destruction. At least heavy metal is annoying, if you don’t like it. (It can only be  boring to people who love heavy metal and recognize musicians halfassing it.)

I had to get outta there.

But places change and grow. Seats are changed and arranged. Lights are…still dark, but more are added to allow for pool and a luminescent forest animals. Reggae is removed from the jukebox and replaced with Portland style hipster selections; Duran Duran, Sleater-Kinney, Decemberists, Black Sabbath, Solomon Burke, and so on.

And I never had a problem with the beer selections. They’ve had a Ninkasi beer on tap for as long as I’ve been coming here, usually supported by Deschutes’ Mirror Pond and PBR, with a few random selections. I’m sipping on a Double Mountain kolsch right now and once again, they have knocked it out of the park.

As people wander in, usually in groups but even solo, I get it.

It’s a neighborhood bar. People seem to know each other, even when they don’t. They casually share tables if there’s not enough room. They’re here to shoot pool, watch the Blazers and hang out with each other. The TV is loud enough but can be easily ignored. An old guy drinking Hamm’s in the can steps outside, puts his hood up and lights a cigarette. It’s the way I like winter in Portland; steady rain but not ferocious, wet without soaking, night without gloom.

The bartender is delightfully awkward, someone who has found confidence in her Olive Oyl look and decided to totally rock it. A less confident woman would elicit pity but she is smiling and joyous to watch, beautiful in part because she has decided she is. A good lesson for anyone; we decide to be who we are, and it shows.

Saturday was my last day on the coast and after a long hike under cloudy weather, I was more than ready for a beer. I had two left, and then I’d be down to the beers I’d made myself. A chore I know but there you have it.

I started my evening off with Rock Dog’s Punk IPA, and after a long hike this was not the beer for me. I was surprised at this; the imperial is so well done, but this didn’t give me any nose nor flavors on the front end. I was left with a bitterness that coated my mouth and left me wondering what went wrong. Since their imperial IPA was so balanced, this Punk was a real jolt and I’m wondering what their next beer holds for me.

Lastly, I had a pale ale from Nogne O, and this worked out much better. It is at this point my notes fail me, however. Possibly a combination of distractions from my niece and nephew, or possibly just being tired but I wrote not a word about this beer, I just drank it. I’ve had the brand before (though not the style) and I like their beers, so I had confidence when I initially chose this beer, and it was validated. I remember that much.

As a side note, I really really like the branding for this beer. It’s simple, colorful (each style has it’s own color ‘O’) and straightforward. Maybe I’m just a sucker for colors. Worse things have been said of me.

Sunday felt like a longer drive than it probably was, just due to the effort of packing a lot of visiting in to a short time. We cruised into town almost lazily, though, determined to not cook for ourselves today. One stop at Fire On The Mountain, and the recovery from a vacation began. After the sampling of various sauces, chicken wings are ordered, and I ask for Roots’ Kolsch to wash it all down.

I enjoyed this. After a rather intense vacation leading to my need for chicken strips, this was so mild that I had a sense of relief after drinking all these very intense beers. Surrounded by cheesy paintings with hippie and chicken wing themes, this mild kolsch let me tune it all out and wait patiently for deep fried goodness. Steve Earle was on the loudspeakers and somehow that makes the painting of Muhammad Ali with drumsticks for boxing glove s less painful.

I am full of fail today. Today being a period of time going back at least 24 hours. That was when I took my first salsa dance class, and if anything is true in this life it is this:

I do not have a body made to dance. It is angular, and has no flow to it. Dancing is all about flow. My hips do not turn, my shoulders are not loose; I am not meant to dance.  There was 60 mintues of me not remembering how to count to four, how to pivot on my feet, having less and less fun while others seemed to be having more and more, as though it was being siphoned from me.

This is what I ponder drinking Rock Bottom‘s Kolsch “55”, made for Oregon Craft Brew month.  It’s got a faint lemon zest nose, a clear golden tone, and finishes cleaner than a shiny new car waxed by a 16 year old. The flavors are mild, sweetly maltly, not a hint of bitterness here. It’s quite tasty but now I want to try the Swan Island lager, just so I can expand on the differences.

I do not have time for this. Work calls. I have a meeting at 3:30. I have to enjoy this beer while I can, even though I am dispairing at my dancing skills. And having to go to the meeting, if I must be honest.

Before I leave, a waitress asks her coworkers about breakfast places downtown. I consider suggesting a place, but I can’t remember the name, and feel weird about intruding on their conversation. I just pay my tab, put my shades on and leave. I’ll have to try the lager tomorrow.