There were New Zealanders in line in front of me, which was awesome. Portland really does have an international reputation. These notes rapidly got out from under me, as I was conversing with attendees, remembering recommendations from friends and trying to satisfy my own demands of ‘the new’, so please forgive any gaps.

These are my (mildly) edited notes, with pictures as I could manage because today has been long and I am tired. And intoxicated. Don’t worry, I took the bus home. Which I emphasize because safety is more important than beer. 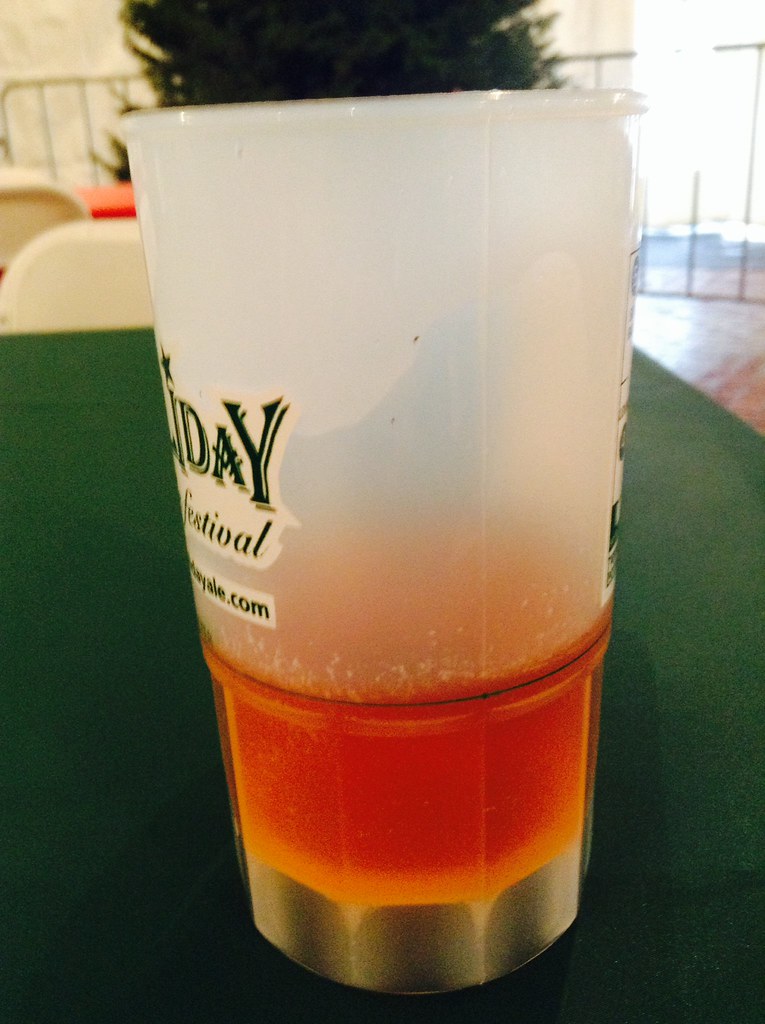 Reverend Nat’s Providence cider.
Good thing to start with. Nose has that cinnamon apple pie going on that is so nice, and a warm drink in a cool day is never unwelcome. I cannot find the listing in the book through! How am I going to remember I had a hot cider?

The finish is very tart and I get a floral element. I’m told that they made this cider from New England varieties of apples so it would be tarter than typical, and added honey for the Festival. This oculd be where the floral elements come from on the finish. But now I need a beer.

Eel River Gargantua II
Vanillaish nose, which is nice, the beer drinks super easy, with a dry chocolate finish. I dig it. Recommended by Will.

At this point I met Tracy, a beer lover who had a list. Way more intense than I was going to get but I thought it was awesome: 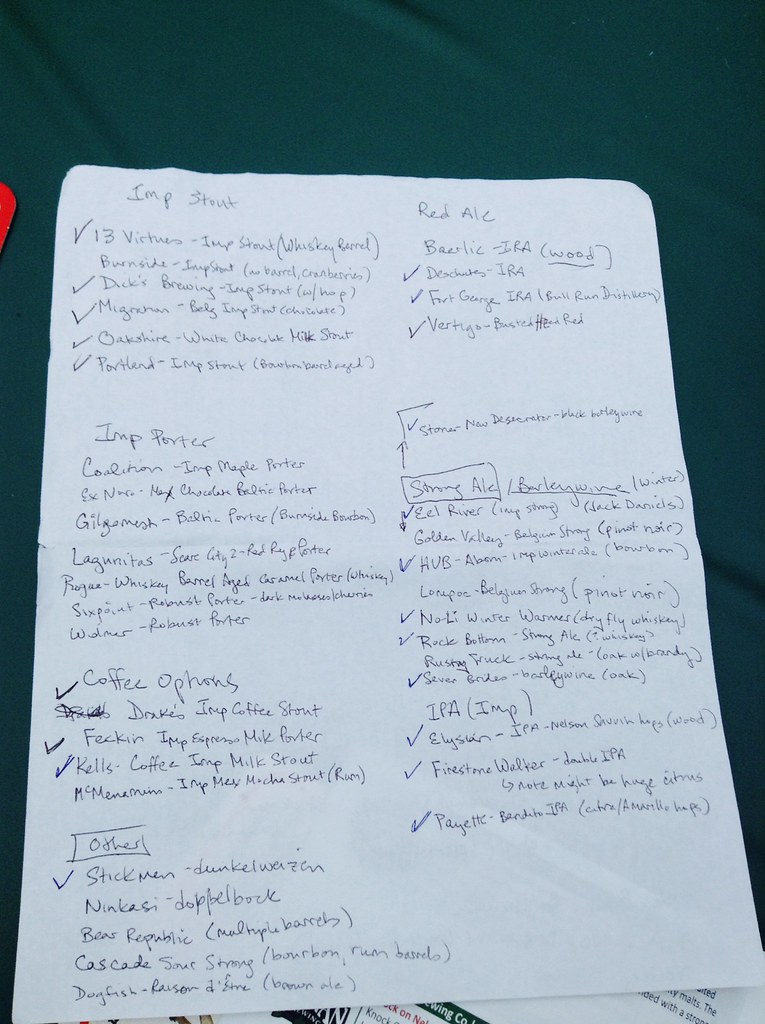 Stone New Desecrator (Recommended by Tracy)
Oh man, the nose on this is..something else. Dark. Cave malt. Mushrooms. This is what I feel like when I drink this beer. Gollum would love. It’s good.

Feckin Top O’ The Feckin Morning
WHOA THIS IS ESPRESSO NOSE
But the flavors go more chocolate covered coffee/espresso(is there such a thing?) bean. I like it, but I can see where it miiiight not be for everyone. But the end of the Feckin is too much. By the time I’ve reached the end of this taste, I feel like my palate is just overwhelmed with coffee. It’s not a bad beer but it’s definitely a dominant force. 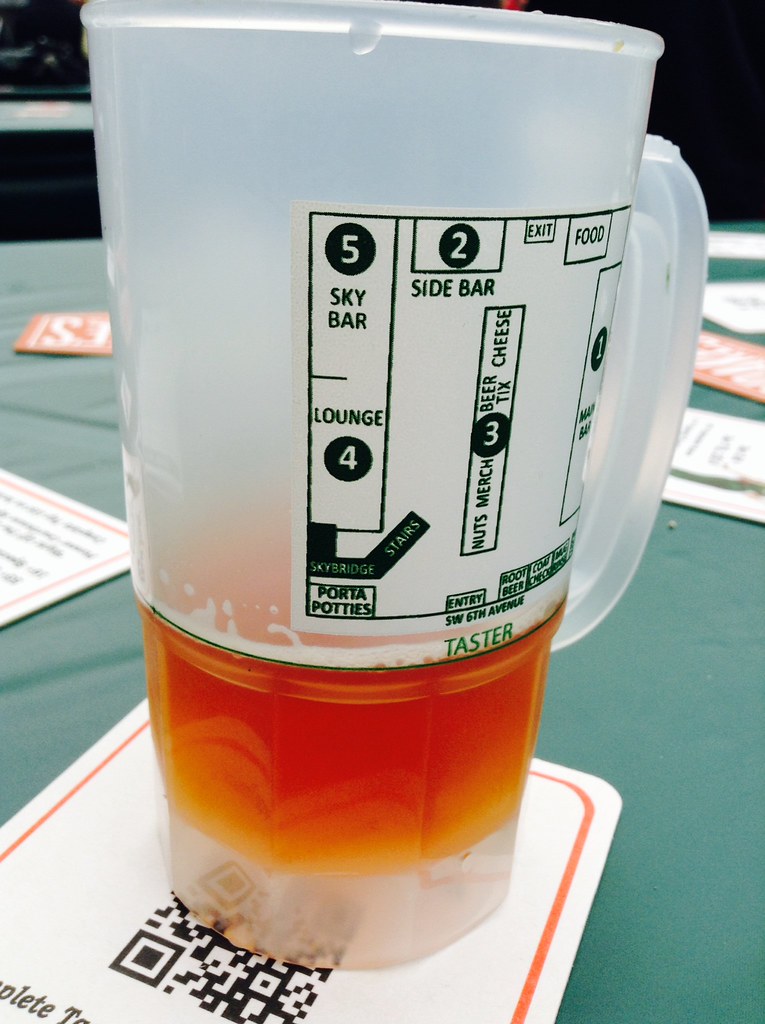 Payette Bandito IPA
Ooooh, that’s some diggy dank hops in the nose. It is what it says; a crisp IPA with a solid bitter finish. Piney, not citrus and I realize how much I’ve missed a not-citrus finishing IPA! Jebus. It’s SO good to have some damned variety.

There’s a server in a purple Santa hat who is swaying to the Xmas tunes. It’s the Beach Boys so I can’t resent it.

Slanted Rock Cordial Tease
Beer approached with trepidation. Peppermint is listed as a potential flavor and cherries. What the what?

Dried fruit nose. Cherries. Undercut by coffee. Tastes…good? Huh. The peppermint kinda bats cleanup! Which is weird but it’s a nice way to finish a beer like this off. This isn’t too heavy on the tongue but it definitely has some different flavors happening and the finish works. No, I don’t understand why. Nicely done.

Hopworks Incredible Abominable of the Enchanted Barrel Forest
Fuck your name. You are not Blue Oyster Cult.
Citrus, for sure. Bourbon? Boozy nose, yes. A little spike of alcohol in the finish, certainly. Dry finish. Is it good? It’s…cromulent. I don’t hate it but I’m not in love with it. Hm. Slightly dirty on the finish. Something not as awesome there. 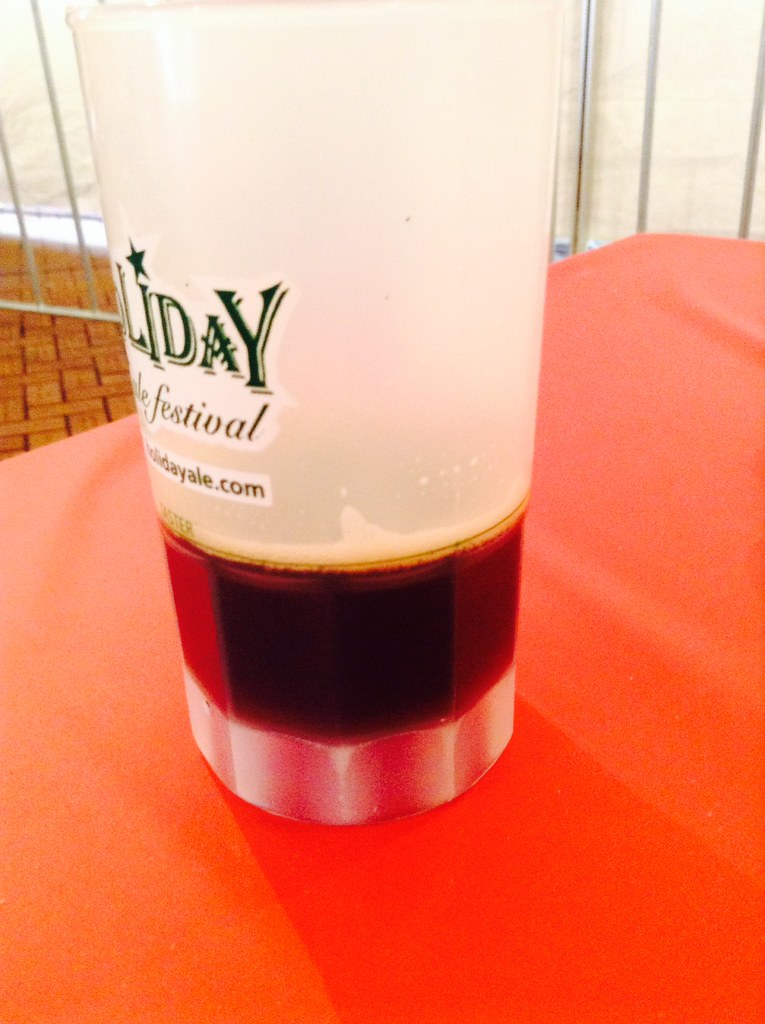 13 Virtues Barrel Aged BMAX Stout
Soft chocolate nose and it’s got a general pillow factor that I like. Nothing too intense about this beer but damn, it’s nice. Even the finish is good

Baerlic The Great Bear
Hmm…it’s not bad and has a dry finish, but it isn’t very distinctive. I don’t dislike this beer but I can’t recommend it either. It’s just there, you know?

Widmer, Frostie the Muncieman-porter
This…smells chocolatey and is sour? WHAT?
No. NO fuck this shit.

Met slainte from twitter! Holy shit. I’ve been interacting with this dude for years on Twitter and I had no idea who he was until today. Super cool!

Finnriver Stone & pome cider
This  is good. If Sprite was awesome to drink this is what it would be.

Golden Valley Tennen Boom
Kinda chewy in a good way. Vague chardonnay note in the nose this is tasty and easy to drink.

Fearless Ichabod pumpkin
You know, it is a decent but not heavy pumpkin ale, with a spice finish that keeps it from being heavy. I’m surprised because fuckin’ pumpkin ales.

And that’s what I can do! Have fun at the fest, everyone!

Check out this list of beers. I don’t even know where to begin with that.

This is one reason why I always gravitate towards breweries I haven’t heard of before: it’s a method of dealing with option paralysis. Payette or Deluxe? Don’t know ’em. Let’s try! Because otherwise I will stand there for twenty goddamn minutes trying to figure out what I should have next. And that’s just crazy, especially during the winter and I’m drinking outside.

Still, there’s a promising list of interesting ales there. Last year I barely went wrong with my choices…except the part where I forgot to have lunch. I won’t make that mistake again!

There were quite a few interesting experiences at the Holiday Ale fest, most of them pretty good but forgetting to eat lunch was not one of them. Despite that rookie oversight, I had a decent time; it was warmer than I thought it would be, there was a whole ‘skybar’ section which made me feel like I was drinking in someone’s awesome tree house, and I got to talk beer with the Taphandle people. The glasses sometimes gave off a weird plastic scent, but for the most part that didn’t wreck the beers so you take the good with the bad. Let’s get to the (mildly edited, as always) notes!

Mcmenamins-Mele Kalikimaka stout
Has a nice, warmly toasted coconut flavor but an odd aftertaste though that I can’t place. I can’t say it puts me entirely off, but I’m I do wonder if I’m missing something.

Elysian-Doom golden treacle pale
It might be a good palate cleanser, a nice contrast to the other ales but it’s not working for me. Something a bit viscous putting my tongue off and quite bitter! I was really surprised by that.

Deschutes-Abyss 07 imperial stout
Deschutes was running a vertical tasting of Abyss, 06-12 and I had to pick one. As always, this is just impossible. The flavors of coffee, chocolate and hints of black licorice are so strong, thus almost feels solid. It is sooooo good, though. I got to try the ’10 a little later on and it was also good but had a sour note to it which provided an interesting contrast.

Crux Fermentation-Oud Freakcake oud bruin/flanders
It tastes like a fruitcake in all the best ways. Hint of spiced rum, which makes this work or not work depending on how you feel abut that. Cinnamon, coriander all in there too, with a sour note that strides in at the end like a graceful lady in heels.

Deschutes-Virgin Sacrifice-cherry stout?
Flavor come in the wrong order, sour coming at the end when I wanted chocolate. Nope. Avoid.

Lath Neppur-St Dorothy’s peach cordial ale
Very good, dried smoked peaches in liquid form, it’s perfect for the in-between beer to break up the winter ales. I like it a lot.

Gigantic-Scut Farkus Affair holiday ale
A really nice beer, well balanced with a fruity quality up front, and a nice caramel to finish: one of my faves.

Kells-fruit cake ale
If they had called it a brown ale then I’d be ok with this beer but the expectations are raised and frankly, it does not rise to meet them. This ale would be great paired with a meal with but doesn’t really show off the skill of the brewers. It’s just a brown ale and when they use fruit cake in the name, I was hoping for more.

Pints-Hibernation weizendoppelbock
Why does it smell of cheese? It’s a hefe and a decent one at that but maybe I don’t like hefes? Sour note at end which I’m not too thrilled with.

Vertigo-Polar Blast barrel aged porter
This is an excellent porter: thin as fitting style, but with great chocolate and vanilla notes and it feels really light.

Fish-Gingerbread ale is..what it says! That isn’t a recommendation or a condemnation. If you want this flavor, have it. Be prepared for poor glass scents to ruin a perfectly good beer though.

And there you have it! I hope you are able to enjoy the Holiday Ale Fest too. Don’t forget to have lunch!

This year I’ve been granted a press pass to the Holiday Ale festival, which is awesome. My budget wouldn’t allow me to go otherwise and the intensity of the crowds at the HAF are such that I’m disinclined to go anyway. However, an opportunity like this cannot be turned down, especially since many people tell me the Holiday Ale fest is their favorite.

There is a downside, though. I can try ten beers and there are forty nine. So I have spent the last hour looking over the list of offerings, trying to suss out which ones will be worth my time. The Lompoc and Kells ales have some interest for me, as I’ve had an early version of the former and been told about the latter. Seeing how the Lompoc has changed and what Kells did when they weren’t going traditional is a pretty compelling idea.

Other ales I feel I can pass on: Lagunitas uses the word ‘krunk’ to describe their High West Whiskey Barrel Aged Cappuccino Stout. Nobody should use the word krunk. Elysian’s beer is based on their Doom beer from last year’s Apocalypse series and I’ve had that-even though this is a vintage edition.

I really don’t know what to expect though. The plan is: head down early December 6th, take photos and notes, and then head home and put it up on the blog.  If all goes well, readers will have a chance to verify for themselves!