I’ve come to Roscoe’s because I feel like I should be getting to Roscoe’s more often. It’s reasonably close and the beer list is good so I wonder why I don’t make this a watering hole. The Commons Primavera Gold ale is on tap and it’s been a looooong time since I’ve had anything from them, so let’s have at it! 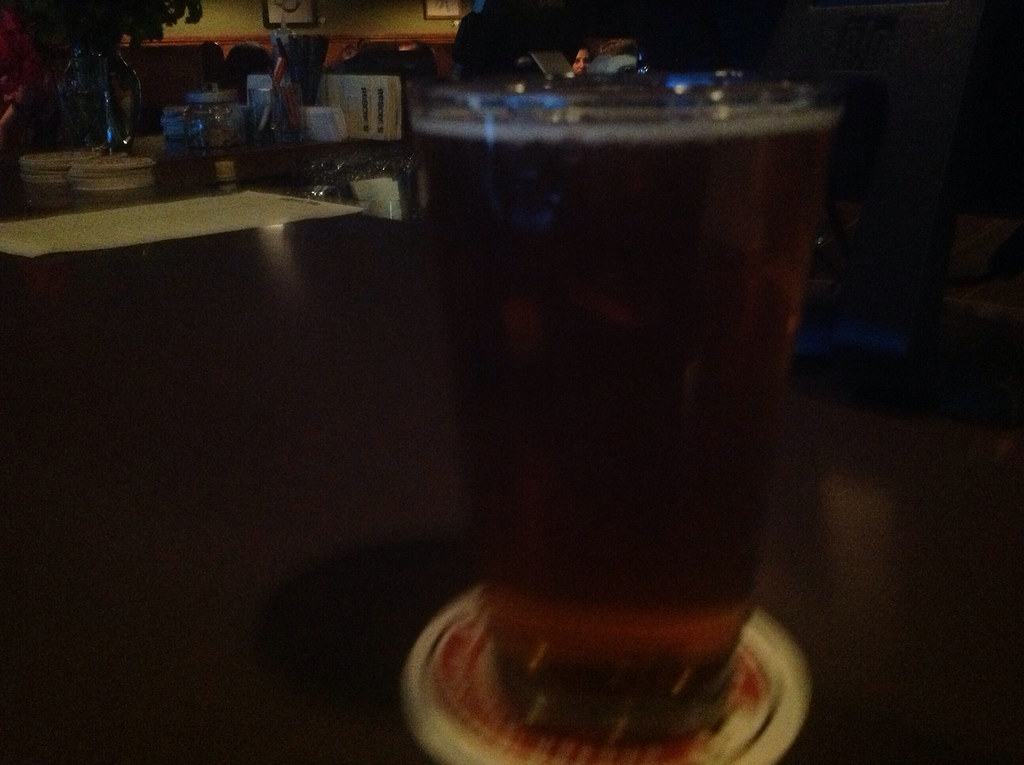 Damn. This is the beer I should be trying to make for summer! Forget lagers. They are a pain in the ass, especially for a homebrewer. This is sweet, with a clean finish and an effervescence that keeps it crisp. Thank you, Commons, for telling me I don’t have to chase that dragon. Plus, now I know what style to make next.

Roscoe’s is very quiet tonight. I’m a little surprised. I’m not complaining, since the lower-key atmosphere gives me a chance to enjoy the pub without feeling overcome by people. If it was like this all the time, I might take up residence.

A third residence, that is.

I ponder the beer list at Roscoe’s, trying to decide what my second beer should be. I don’t know who’s picking out the selections but they do a good job. Broad range of styles, from sours to kolsh to a stout on nitro, and with breweries still, amazingly, concentrated on Oregon (with WA & CA smatterings). Plus one beer from Denmark, which seems to be the case rather often, here. Some beer from across the seas makes it in, just to remind us that Americans are not the only ones making interesting beer.

I approve. The sooner we remember that we aren’t isolated, the better. Plus; who doesn’t want to see what those crazy Danes are doing?

I feel like I want something more aggressive, next. This golden is quite tasty but it is not hitting the spot, most likely because it’s no longer 90 degrees out. Three days ago, or a month from now: totally different story.

I could just ask for a sampler but how easy is that? Too easy. No. Let’s just go big.

I’m move to the Aussie IPA (the second in Bridgeport’s three anniversary beers)
and I have to say, this isn’t working for me at all. The grapefruit is overwhelming! I don’t understand why this beer has been selected for a highlight. Because-and I know they know how to brew this- provide a strong caramel backbone to this beer? It becomes amazing. A pale instead of an IPA, perhaps, but who gives a toss? Pales are good! As it stands, this beer feels like they are trying to get away with one: undermalting the beverage to overemphasize the hops.

Let’s ask the bartender next time. Prodigal Son’s Fatted Calf stout or Crux’s On The Fence pale. Both nitro. Bartender likes them but at the moment prefers the Crux. I go for it.

I am staring at the nitro settling, creamy density becoming clarity and I try not to think of it as a metaphor for life that cost me $3.50. Sometimes it’s like that though; if it wasn’t the poets would all starve.

Generally I disapprove of a pale ale on nitro; part of the glory of the style is that it has such a nice nose. I even cringed a little as I watched the bartender pour the beer, scooping out a head so thick that she cannot fill a proper glass. I am concerned.

But it all works out. The dense foam of the nitro cannot stop the hops and the creamy qualities that the nitro brings to the ale actually mesh nicely with the hop bitterness. I don’t know that this is the first pale that I’ve had on nitro but it’s certainly one of the best.

Although this really just confirms how much I like Crux. They do such good beers.

I haven’t even been here 30 seconds before the barkeep pours me a sample. I take it. Commons‘ Little Brother is a Belgian dark strong, has a hint of raisin in the nose and drinks like an amber with a gentle sour stroke at the end. Cherry-ish. It isn’t until it hits my belly that the alcohol blooms and it registers that I’ve got a 9% beer. It’s a pretty damn good one but given the strength I’m glad I got a small glass.

Maybe I’ll have another. I probably should. It’s worth investigating further. One to celebrate my release, if you will.

I am looking forward to being untethered from this place for a bit. Like a much lesser Ponce de Leon, I have a new world to investigate and bring word back from. I expect I will do it without finding gold, magic fountains or destroying he local population, but you never know. I might get bored.

Also, I want to move from this theme. Being in the same place at the same time has almost become a job, and despite this particular job providing me beer, it still drains some of the fun out. Being able to come on days other than Monday at times of my choice mean that I will be allowed to enjoy this experience as things are meant to be enjoyed: when you feel like it.

On the upside, the consistency has allowed me to meet with friends, usually to play cards but just like making an appointment to drink, it’s all just a mask for hanging out. Hanging out is why I shall be back soon. I don’t know how many places I can walk to from my new location but I do know it will take me over a month and into realms uncharted. It might even take me east of 82nd, which…well, maybe it won’t.

The point is, I’m only leaving for a little while. There are people to talk to and adventures to have. If I come back for resupply, I doubt anyone will mind.

Last night the OBC had an out meeting at The Commons brewery: I arrived early to help set up and got to chat a little bit with the owner, Mike, who was really cool and very kind to answer my questions about his beer and his brewery before everyone else arrived. I found out that there are ways to tell how carbonated a beer is in the bottle and The Commons is having their beer tested so they can deliver well bottled beer. I didn’t even know there were such devices: Science, once again, is awesome.

I also got to catch up with Josh, an early booster of my blog, now employee at the brewery and talk to him about what he was doing and why they went for bottling instead of cans. Turns out, some of their beers, like the Urban Farmhouse ale, are carbonated to the point where canning won’t work and bottles are less likely to explode, given the costs of a small brewery like them.  But cans also represent problems in non-Northwest markets. Not that it’s an issue for them (yet) but he has been told by distributors in the Midwest and Florida to not even bother with cans. The stigma cans have for being associated with macrobreweries has people shying away from them, I guess.

Finally, a brief word about the space; that brewery had a really nice vibe to it. It felt open and it still had that ‘new, shiny’ glow that new, shiny places have and was really just a nice place to sit down and have a beer. Go visit when you have the time, everybody is awesome and the place is cool.

The Commons’ Revival Blend doesn’t tell me much about the beer, except that it’s a three-beer blend.

I can, of course, provide a photo which is bad, but I suppose that’s better than nothing.

Man, my fingers are huge! Or this beer is really small. (The beer is small.)

The Revival Blend tastes a bit like ‘The beginner’s sour ale’. I don’t even know that I would describe it as tart, it’s so mellow. There is definitely the sour ale funk in the nose, though and an ever so slight pucker at the very end. Nothing off putting but there isn’t a sense of sweetness that some  Flemish reds might have either, by way of example but this beer shows its pedigree. Still, one could almost mix this up with 7up and Chambord and while that sounds unkind I don’t mean it to. The point is that the Revival doesn’t want to challenge its audience.

These qualities give this beer a very drinkable quality and are awesome, in my opinion. The Revival, in about two minutes has, for me, established a place as an autumn beer: the kind I can have after a long day of work and feel really refreshed by, yet can easily go with heartier flavors. This beer may be a year round thing: I am not trying to suggest anything to the brewer, merely that I am drinking it after a very long weekend of very hard work, both mentally and physically and I feel better. I could have another. I ordered a small glass because I just wasn’t sure but I could’ve drank a pint.

Sour ales have been coming up a bit more on the radar and for people who are uncertain about them, this is a beer I’d start them with. If they’d prefer something tarter, we can do that. But if they’d just like to stick with this beer, I could not fault them their selection. This one is good, people, try it if you can.