“That’s a pretty ridiculous hat,” she says. She’s waiting for her drinks as I arrive and has commented on my appearance before my ass has even made contact with the barstool. She’s got got dishwater blond hair in a ponytail, a gray hoodie, with sharper features around her nose and chin.

There is a pause I didn’t realize was going to be there until she speaks again.

“Any reason for it?” Her eyes are flat.

I look back, confused: I hadn’t realized this was going to be a conversation, exactly. It doesn’t feel like a fun one and it’s only the third sentence.

“Uhhh…it’s a long and dull story,” I tell her, trying to gently deflect from the subject. Why DO people wear clothes? Well…

My braingears churn rapidly and finally I say:

“I liked a comic book character when I was sixteen and he wore a fedora, so I started wearing one.”

“Oh,” she replies. I can feel a wave of judgment. I don’t know what else to say. She gets her beers and I’m glad that she is returning to her friends. I do my best not to eavesdrop on the clearly judgmental conversation she’s having with her friends but snippets come through to me as I write. I get the sense that they feel this pub is theirs.

Good luck with that. 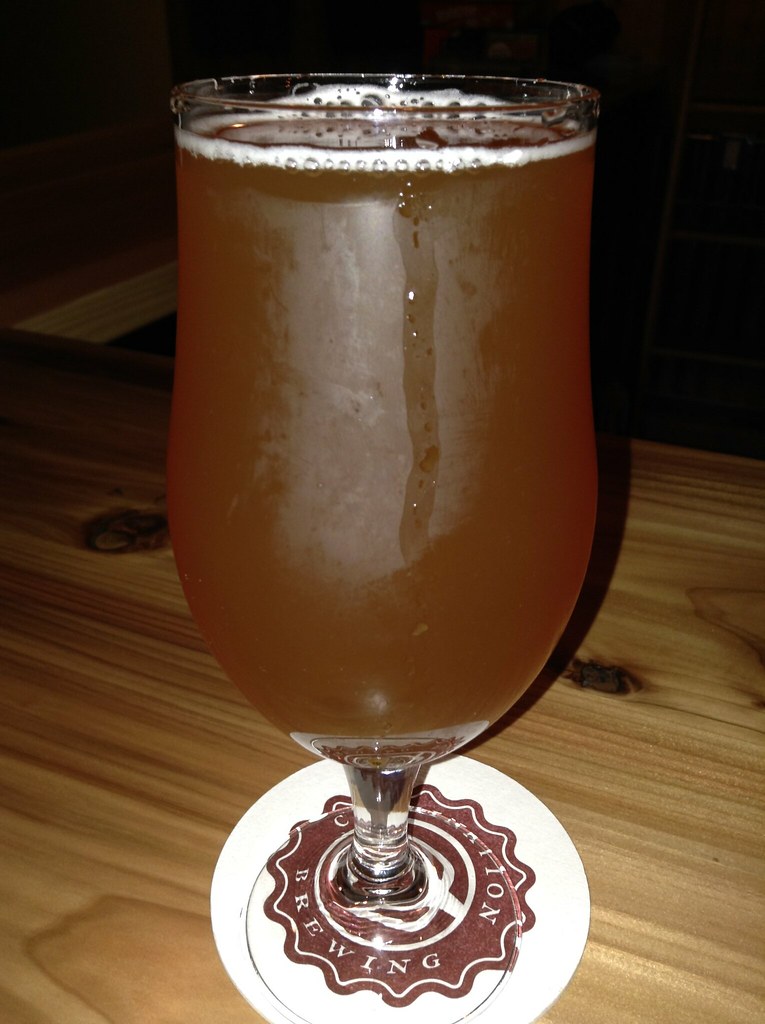 I get Culmination‘s “ReYnard” belgian yeast IPA. Belgian yeasts and IPAs rarely seem to work well together, because the yeast aftertaste tends to be competing for space with the hops aftertaste and this one…almost works.

The nose has a bit of funk to it, with a nudge of citrus and the finish repeats the nose but with the bitterness arriving first and then something kinda plant funky on the end. The body holds it all together, albeit barely: I’m pretty sure there’s some wheat malt, because the textures resemble a wit on my tongue, a chewy quality that keeps the whole thing from going off the rails.

It’s not great though. It holds together, that much I feel confident saying, but the sum of the parts don’t create a greater whole. Still, it’s a bold choice and interesting so I’m curious about the other beers Culmination produces.

The only other beer right now is a cascadian dark ale and I frequently do not like that style. I can only think of one beer in that style I’ve ever really liked so I’m feeling  dubious about trying it.

Still, the owners are here: April and Tom are their names and they are clearly enjoying themselves, talking about their business, visiting with customers as they can. The serving area has been open for all of three weeks, I hear, which explains the limited selection. It also makes me want to give them a bit of leeway: the first few months of any brewery often produces beers that aren’t quite on target, as the brewers dial the system in.  Let’s try the cascadian dark. (They call it an imperial black IPA, the 4&20)

It’s got chocolate and citrus in the nose, the chocolate barely there…but the flavors go in a stranger direction. It’s sweet! The chocolate is played up heavily in the malt and the bitterness isn’t too prominent, neither from hops nor a coffee astringency that many beers of this style are far, far too guilty of.

I like this beer! I like it quite a bit. It’s got a similar issue as the previous one; the sum of the parts don’t necessarily make a greater whole but I’ll be damned if it isn’t interesting and it’s tasty enough that I’d want to share it with other people and talk about it. So I’m intrigued. Let’s see some more beers from them, and check back in a couple months.

I made a belgian IPA and although the initial look wasn’t so hot, the results have been pretty good. But how do I describe this? One of the pluses of being a homebrewer is that you can make anything, as with this pal who has made a cat themed beer. I do not know the specifics of it, but he has told me that catnip and other ingredients are involved.

The minuses would be; how the hell do you describe it? In the case of a beer made with catnip I think I might just default to good/bad, just because it’s so alien. However while a belgian IPA might be off the beaten trail, it’s not like searching for Dr. Livingston.

You can’t tell from the photo, but the beer does have a light carbonation to it; the head drifting on the top like peach fuzz. The aromas are malt-sweet and citrusy, but they’re very light, almost faint, really.

I think this beer may have again suffered from me putting the yeast in too soon; there is an estery quality that shouldn’t be present in an IPA style. But is it OK in a belgian? Is it possible I did everything right and the yeast is doing exactly what it’s supposed to?

There is a bitterness to the back end which is actually nice. Sweeps away the sweeter flavors, reminds me that I put hops in this beer damnit, and they have a say in how things taste. Plus, it helps the beer go with foods like spicy potato chips, holding it’s own quite nicely and keeping my poor tongue from burning for very long.

I brought this beer to the fine people at the OBC, and to my surprise the response to it was quite positive. No questions of potential mistakes. No curious disappointments. So I did it well, even if I can’t tell you exactly how it tastes.

The question really is; can I make it again?

A less-than-awesome shot of the belgian IPA I bottled today.

The first thing to know about this photo is that this beer represents the end of the carboy. The cloudiness of this beer is misrepresented in this shot-while filling bottles it seemed quite clean. There’s an excellent spiciness in the nose, not unlike mulled wine or hot cider.

The beer drinks pretty smoothly but the finish is where things seem to go off the rails. There’s a dirty flavor at the very end. It doesn’t even show up until the beer has been swallowed, and then there’s this moment: wait, should I really have put that in my mouth? I may have made a very poor decision here.

This does not bode well. However, it could be due to an abundance of yeast in the beer I’m drinking, or other undesirables that come in at the bottom of the beer, it could be that after a few weeks in the bottle it will clear up, that the flavors will shift as the beer is kept under warmer temperatures for a little while, or it’s possible that I messed up somewhere, and this beer isn’t worth drinking. We shall see.

What’s really weird is that the Brewer’s Calculator is telling me that this beer is 7.84% by volume! It doesn’t taste like that–but maybe it really is that strong, and the alcohol is throwing off the flavors too. I have to admit, after a couple sips it doesn’t seem so bad, so maybe the high alcohol content is a good thing.

On New Year’s Day I decided to try my hand at making a Belgian IPA. I first sampled this style at one of the Oregon Brew Crew meetings, and liked it quite a bit. However, after my last experience with brewing a belgian ale, I realized that I would need to be willing to really let this beer sit for a length of time so it would be ready. What better time to prepare for a new thing than New Year’s Day?

I steeped 13 oz of Caramel 20, 1 lb 4 oz of Simpson’s Naked Golden, and 2 lbs, 5 oz of White Wheat malts, at about 150 degrees, fro about 30 minutes. Then I added 7 lbs of liquid light malt extract, and turned the temperature up for the boil.

After cooling, this beer came out looking a little odd.

The Original Gravity is about 1.08, and I added to that two packs of Wyeast 1814. This is the reason this post is tardy; for 36 hours, nothing happened with this beer. I’m not sure if the yeast is just slow, or maybe I made a mistake in the brewing process. So I brought it up from the basement, where it was resting at about 60 degrees, and put it on the main floor where hopefully it would warm up just a little and maybe let the yeast activate. Fortunately, it’s taken off a bit since then, at about 62 degrees, and so I’ve put a towel around it to keep the light out.

We’ll see what happens from here.