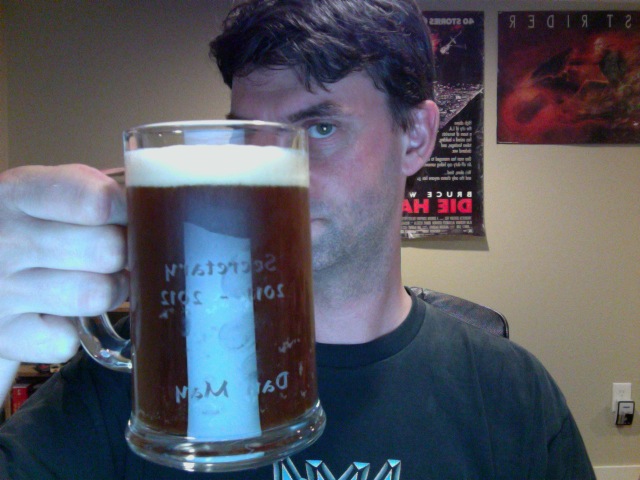 I have been considering pushing more malt in my beer as of late and this would be the first to show that effort. It’s clearly a sweeter ale: maybe you could call it an amber-the C120 malt gave it enough color, that’s for sure- but I think it might have a life of its own. The honey malt has something to do with it, I think but there’s also just a restrained hop presence and a nice finish to this beer. The nose isn’t too potent with a hint of grass, I think but nothing to indicate a strong hop presence. The beer itself isn’t too caramel focused and it finishes pretty cleanly, so I think I’ll have another.

This one is my fault. I tried to get blood from the stone that was a very, very tired yeast. Essentially; once again, I have a beer with little carbonation.

The upsides; it’s very clear, and there’s some complexity here, including a belgian-saison style funk in the nose that doesn’t replicate anywhere else in the beer, with a touch of sour in the finish, but the middle doesn’t carry much. It’s a little like a cider, in this respect.

So it’s interesting! But it’s also not carbonated. At all. I can drink it and I’ve learned from this but all in all, I could be happier with the turnout. Let’s get to the recipe:

I have made this and it is good. I was a little concerned when bottling it because when I tasted the remnants, there was a a heavy caramel then grapefruit flavor and my initial thought was: that doesn’t work.

Remnants are only semi-useful when predicting a beer though; they’re too warm, non-carbonated and frequently have a bit of yeast and malt sludge mixed in due to the fact that the brew has been handled a bit before bottling. As a result I try not to get entrenched in an idea about a brew and take that initial sampling as more of a: what might this be like?

The most relevant thing about the beer now is that the grapefruit and caramel switched places. I know how that sounds but nevertheless, now the beer has grapefruit notes, then caramel and it makes a world of difference when talking about the drinkable qualities of the ale.  There isn’t much of a hop nose on this beer, so I’m taking that as a lesson that some hops are better as bittering agents.

Let’s get to the recipe, shall we?

According to my notes, I had to add quite a bit of water to this one, once I put it in the carboy. Seems like a lot of water got lost between the kettle and the carboy and adding some water is standard but I recall having to put in quite a bit, maybe even two gallons’ worth!

Especially after 2 hours of yardwork. I wonder if it would be worth it to have ‘yardwork beers’; cheap bottles of cold beer (like Session) to drink after an event like this. My hands are red and unhappy with me. Instead of typing more, I think I’ll just keep them around the bottle of Twilight Ale I’m drinking.