I didn’t even have to ask Alaksan brewing what their best selling ale was: they tell me on their web site that the Amber ale is their flagship. Problem solved! Plus, I even get to save some money for once, because the Amber is available in a handy 22oz bottle instead of having to buy a six pack.

But buying a six pack wouldn’t be so bad.

Caramel in the nose! That’s pretty exciting because it’s not hoppy. That this kind of variety exists at a grocery store is kind of remarkable. 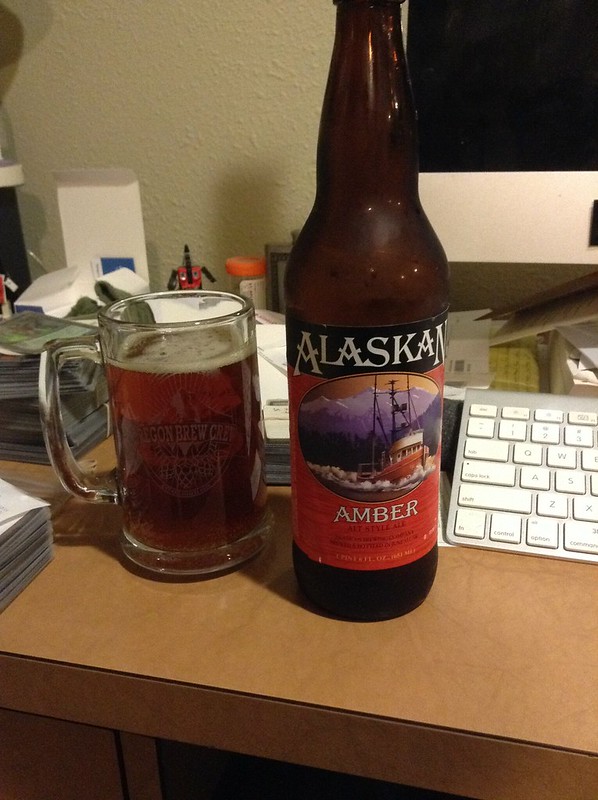 The finish is very bright; the bubbles are adept at sweeping nearly everything away. Nearly. After it’s all done, I’m noticing a biscuit flavor, just a little bit. The label says it’s an alt style and when I look at the style guidelines, it’s suggested that there should be an assertive hop bitterness but I’m not getting that at all.

I’m not complaining by any means. This beer probably a “take” on the style and what the brewers at Alaskan did to this beer I can’t say. But it retains it’s crisp finish (with biscuit) all the way to the end of the glass and I really see this beer as a great staple to the pub. There’s enough going on that I can drink it by itself but also nothing wrong with pairing this up with some nachos.

I was writing a post where I started to talk about ritual.

Then some silly computer thing happened and I lost it all.  Unfortunate, since I cannot reproduce the work and I had half a mind to just chuck it all, let people know I had computer problems and call it a night. They would understand: computer frustration is a reasonable excuse to quit, right?

Then my table companion, in his pursuit of food, mentions that he is definitely getting something special, because it is not often that he is released from his Monday night ritual. Now maybe that’s a sign, maybe not but let’s give this another crack anyway.

As the old year passed and we celebrated, I saw a friend receive a marriage proposal. Two rituals rolled into one night. Here I am, writing a post again while having a brew, back to a ritual again.

I don’t believe in doing anything just because you do it. I want to know why, I’ve always wanted to know why; a source of occasional frustration for my parents and friends. Nevertheless, I do understand that ritual matters and how important it can be if you know why you’re doing it.

So, we say goodbye, we say hello and recognize the accomplishments and trials and everything we can remember. Reasons may differ but if we’re doing it right, I think that we’re engaging in those rituals to honor our past while looking forward to our future. “That happened. I accept it. Now I welcome the next thing.”

Which is why I’ll start sacrificing children to Ra tomorrow.

In truth, so much these days pushes us ever forward and although our pasts become more and more accessible every day, there is a Very Loud voice insisting on the right now, on the next thing. Rituals ask us to stop and actually exist in the now and acknowledge our pasts. We don’t have to live there, nor demand that the now or future mirror the past but I think that it’s important to pause and take a look at the past if for no other reason than because those who do not learn from the past are doomed to repeat it.

I recognize that I’ve spent the past few weeks breaking some of the rituals I’ve had while writing and it’s been throwing me off my game. In this case, my ritual is part of my toolset and if I don’t use my tools, how can I ever get better?

Tonight I’ve had an Alaskan barleywine, recommended to me by Neil. I rhave met him before, during the “Whatever You Say” theme and he consistently recommends solid beers to me. He said, “It’s caramel and roasty, without being cloying, and a nice hop bite at the end.”

All I can add to that is to say that the hop bite is a grapefruit flavor, which lingers pretty strongly and helps keep this beer along a tight line, with those sweeter flavors corralled back into a palatable range. But know when to leave it, I say, so I won’t add any more to Neil’s description.

What I am going to say is: Thank you, to everyone reading, wherever you are. (The stats tell me people in Africa have viewed this blog. I can’t even imagine!) May 2012 fix things that are broken, improve the things that are awesome, and allow the rest of the shit to slide off your back.

The sweetie comes with me to Bailey’s and we chat about a house we like. And chat. And chat.

How many couples do this? All of them, eventually. Sitting at the table, hashing out ghosts, tombstones, promised lands and lucky stars. What can be done? What if?

What choices are we willing to accept?

At the end of the day, this is your life: you choose. You sacrifice this for that, take the rainbow without Indigo because it takes you to Asgard, even if it is an Asgard without Indigo.

Is it worth getting the full rainbow that doesn’t lead to Asgard or is it better to sacrifice a color for a promised home?

I have chosen the Alaskan Perseverance stout. It was made with syrup and honey adjuncts and the flavors show: this stout tastes like banana pancakes and it is not to my liking. I like banana pancakes, don’t get me wrong, I just don’t like it in my stout. There’s a reminder of honey-banana-peanut butter sandwiches that just doesn’t work in an ale. Fortunately, this choice is a fleeting one and I only have to live with it as long as it takes for me to finish the beer.

Like everyone else, I have made other choices. Some might call them sacrifices but I prefer to choose. You can’t say I sacrificed if I chose one path over another. Sacrifice is when there are no choices but the bad one, the one where you lose everything or enough that it might as well be everything.

Not to say I don’t leave something behind. Like the lingering banana flavor, some choices come up and ask if I’d do it all over again. Who’s to say how things would play out with just another color, a blue instead of a green, a Florence instead of a New York?

But at the end of the day, I get to choose. Not everyone does and until the time comes when I don’t get to choose, I’ll try to accept what I get, good and bad.

“I missed all my posts last week,” I bemoaned to my girlfriend on Saturday. I apologize to my readers for that: it happens but I do try to take my responsibility as a blogger seriously since I know I have an audience.

“Well, do a two-fer next week!” she advised.

On my second trip to visit Scott the bartender, I ask a man with geek glasses-thicker, squared black rims-on the rail with a cloudy amber beer what he’s drinking.  It’s the Alaskan Raspberry Wheat. As a longtime and nostalgic fan of their amber, I’m hopeful that this will be a more impressive outing.

Right before I try the beer, I ask the patron; do you like it?

“No,” he says “the raspberry really falters out and isn’t all there in the beer.”

I take a sip. The nose is weird, bready for a fruit style and the beer itself…well, while I disagree with his assessment of the raspberry presence, which I think is there up until the finish, the finish is a touch dirty and makes the whole beer taste strange in a way that puts me off.

We chat briefly-I’m in line so I can’t stay long (location really is everything when I do this kind of post) but I get his impressions. He’s quick to point out that his assessment of this drink are just his “Somebody else might like it,” he says, like someone who’s shared a few beers in his time and I nod. But we come together on the finish, which just isn’t right. When I leave, his pint is not quite half-drunk and it stays that way until I leave.

I understand; I’m drinking half the volume he is and after a few sips the finish is chalky, like raspberry medicine instead of fruit and my tongue has an odd coating on it that I scrape against the roof of my mouth to get rid of.

I recline in my seat and relax. We are in the final hours of the holiday weekend-a weekend that has been beautiful and allowed me to visit friends, see movies (Thor! I say check it out), have the occasional beer {in a very queer moment, I find myself recommending McMinamen’s Copper Moon ale, making that the first McMin’s brew I’ve liked in over ten years} and play lots of Magic. Note; sleeve your cards, gamers who go to pubs. Spilling beer on your $10 card is a big deal. Spilling it on your $10 card in a $.01 sleeve and causing no damage is nothing.