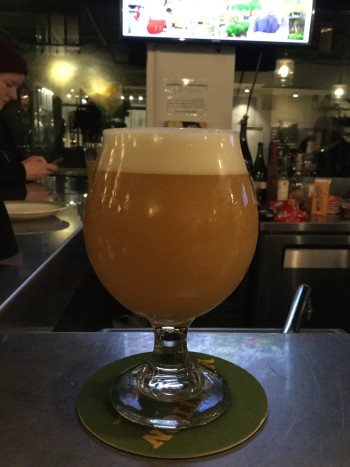 Tonight it’s Ruse’s Prefrontal Polaroid Fresh Hop Hazy IIPA. Which, of course, is a collaboration with Cerebral brewing, because there aren’t enough words in the title of the beer.

The nose is definitely citrus which is about what I expected, but it’s not too strong.

The beer itself has some citrus notes, tilting to the sweet end of grapefruit, which I expected. But it has a nice mouthfeel, with some weight to the beer but not chunky.

However, the finish tastes off. There’s a dryness that starts to form on the roof of my mouth, and scraping away at it with my tongue gives me this weird flavor. I always think of this as dirty, like I’m drinking a bit of unwashed veggies.

The second glass has a pretty severe emphasis on the dryness. I get that quality I more on my tongue and in that space between my gums and lips.

I think it maybe time to leave the fresh hop ales behind. I’ve been drinking them for at least a month, maybe even six weeks. They may just be getting old and let’s face it; life is too short to invest in beer you don’t like.