“You should do this, but for Portland,” my friend Fuz tells me. My initial feelings on the notion are lukewarm, because does anyone need that? There are so many articles out there, what is one more?

Later that night, I run into two Irish tourists at Bailey’s Taproom and they ask me what places they should visit. I spend nearly an hour talking to them. Clearly, I have opinions, so I’m doing this!

These breweries and beers shouldn’t necessarily be regarded as ‘the best’; rather, I would think of them more as ‘the representative-ist’. Places that, should you be in Portland, I’d recommend visiting because of the quality represented, but also the history (as I understand it) of craft beer here, and the variety as well. I’ll try and explain each as I go, just to be clear about my own thinking. There is, thankfully, no wrong answer. Just; where do you want to go? What do you want to have?

I’ll also have a friend with me, in part to facilitate some thoughts on why we’re here, in part to get some real-time feedback before I put pen to paper, to give an answer to the question: why are we here? So if I mention another human, that’s why. 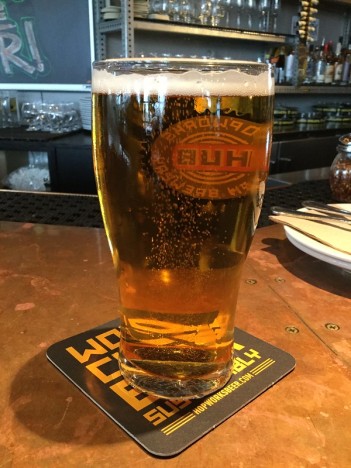 We start with Hopworks Pilsner.

I’m here because this was one of the first lighter beers that I can remember being brewed in Portland-which medaled at the Great American Beer Festival. This was a pretty big deal, because at the time Portland was known for hopping the hell out of every style it could get its hands on. Hopworks’ Pilsner brought hope to people tired of hops and helped set the stage for more styles to be available here.

This beer has a great yeasty bread elements to the nose, and you can absolutely taste the grain involved. I am almost certain it’s two row, but it has a flavor that mass market pilsners just don’t. Plus, it’s got enough of a bite on the finish from the hops that I get a contrast between the sweeter grain and bread flavors.

It’s a damn fine beer and you can get it lots of places in the PWN, but let’s face it; you should visit their pub. There’s a broad selection of ales, including a cider and while some of them come and go, the Pils is always on tap.