Ok, so this is cool: 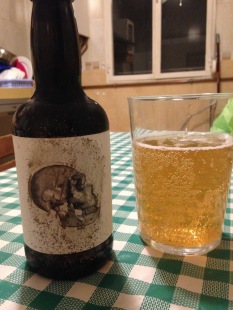 The front of the bottle is scratch-off, and the back of the bottle also has a scratch-off strip that gives you more information about the skull. The brewers were inspired by archaeological digs near Burgos, their home base.

As far as packaging goes, Cerveza Dolina has won me over.

Now, the taste? It’s definitely tending more German than most Spanish beers, which (if you’re getting the commercial stuff) tends to be more like Budweiser. (As an aside, I have to say…if you go to a halfway decent-looking bar and ask for a beer, you’re probably going to get something that is of good quality and taste, even if it’s been mass produced. But I digress.)

Even though the label says pilsen, this isn’t a pilsner–it’s really more in the kölsch line. (Heck, their own Web page for this beer is titled Kölsch.) The colour is a lovely darker gold, there’s carbonation–but not a lot–, and the taste is softly bitter and spicy and earthy. I say softly because nothing really lingers with this beer, but with this style, you’d not want it to. I just wish I had warmer weather to better appreciate its virtues.

Now: can we all go back and appreciate that label again? Because that’s a really neat label.