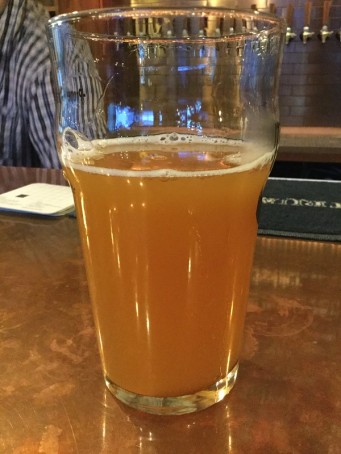 After some deliberation at the Proper Pint, I choose Fly Boy’s Pilot’s Peach pale ale. I’ve walked to the pub, which means I’m a little tired, a touch overheated and thirsty. Let’s have something on the lighter side.

So: the nose has some tropical qualities along with the scent of a freshly cut peach. I’m impressed!

And I’ll be damned, but the ale has a peach purée quality to it. This has multiple levels of meaning though, as the beer has some viscosity to it, a weight on my tongue that I wouldn’t expect from a beer. It’s lighter than a smoothie but definitely has more texture than I was expecting.

The nose fades pretty hard near the end and the beer goes a little flat as a result. If it sounds like I’m perplexed, then you’re right. The Pilot’s Peach had a very strong start but got weird, fast.

Glass two has a sulfuric scent strong enough to have me wondering if I got the same beer! The finish is a lot more sparkly, too, which lightens up the ale considerably from the previous glass.

This mutes the peach flavors, although that may be a result from this being this my second glass, too. Often when something isn’t ‘new’ the flavors aren’t as intense.

Also, the purée quality starts to register as more of a drawback, the further down I go. The fruit starts to override everything and sit on my tongue. Because there isn’t a cleansing moment for my palate, it starts to get a little sugar-sour; you know, when something is sweet enough that your mouth backlashes and a puckery quality appears in the upper corners of your mouth, behind the molars?

Maybe it’s just me. I honestly cannot piece out what’s going on with this beer. I don’t hate it by any means but I also feel as though I can only recommend it in a very narrow window.