C’mon, I had to make the push, this week of all weeks.

I went with a friend to Assembly Brewing to try out their beers and, while a couple styles were out at the time, here’s what we had and a distillation of our thoughts on the beer. The mini reviews talk about the beers in the picture from top to bottom.

The Pale: Cloudy which is unusual…finish is a little rough-‘tastes more IPAish to me’ my friend said. The nose is lemony, citrusy, and we agreed that’s nice. This beer is a bit scraggly and feels like it could use some more refinement. It feels like an IPA. 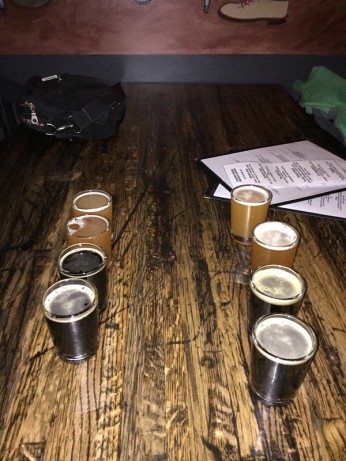 LIVEPA (that’s the name of the beer): More orange tilted nose for me, also significantly sweeter. We’re wondering if the barkeep gave them to us in reverse order. “It’s more drinkable than the Pale, and it’s not crazy hoppy, so this is one I can drink,” my friend says.

A little darker than the pale, signaling some more toasted malts and maybe a little more sweetness. This beer is pretty drinkable and we dig.

Stout: “Roasty, little smoky, roasted over chocolate or coffee-coffee at the end, but nothing’s super bitter” Agreed, and it’s a very dry stout, and while the smoke element is different it’s not bad. A bit more chocolate appears comes up as it warms, but bakers cocoa, not sweet. The beer isn’t very heavy either, making it more drinkable.

Porter: “black licorice, but on the sweeter side instead of star anise”. This finished a little sour for me. A hint of coffee grounds…but it just didn’t quite call out to us.

We do agree that it’s a good space to be in, it has a pleasant atmosphere, unique style, with music that isn’t too loud. Definitely going back and with the place being so young, I think that the beer only has room to go up; the good ones to be great, the middlin’ ones to be good. Assembly is a recommended joint.