I sauntered in to Bailey’s at exactly the right time; empty tables exist and there is precisely one spot on the rail of the bar for me to take, so I do. The bloke next to me has two glasses in front of him, both filled with dark liquid. The one he’s drinking: Perennial’s Sump- Ethiopian Roba, an imperial stout with Ethiopian Roba coffee. 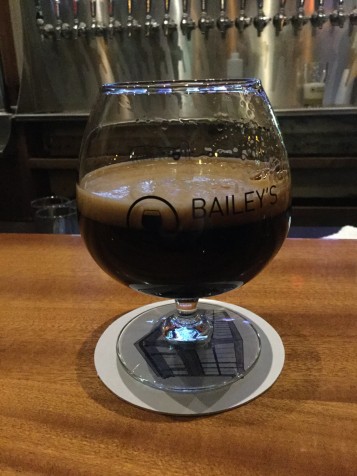 This is some excellent stuff. Coffee is the overriding flavor, of course, but there’s stripe of caramel that slithers over my tongue and adds another layer to the beer. The nose has some heavy coffee notes; it isn’t reinventing the wheel which is OK. But it’s dangerously smooth, and just a little sweet with a sparkle of effervesce on the finish.

It’s also a 10% beer, so danger Will Robinson. This is one of those ales where it would be easy to go over my limit.

I compliment the gent on his choice. We agree this is damn good and he turns to his friend, ‘you had this?’

His friend is drinking a cloudy, yellow ale and doesn’t seem to be a fan of the stouts. He takes a sip and shakes his head in a non-committal way.

“This is the Perennial, right?” The friend says with a tone that says he knows the gent.

It’s a really nice interaction and one that makes me miss my friends, the ones I don’t get to see often, or the ones out of town. Things are always better when you have good people around.