I hate to disturb the reading man at Sessionable. Readers, they’ve staked out their space. They generally don’t want to be disturbed. I know; I’m a reader. 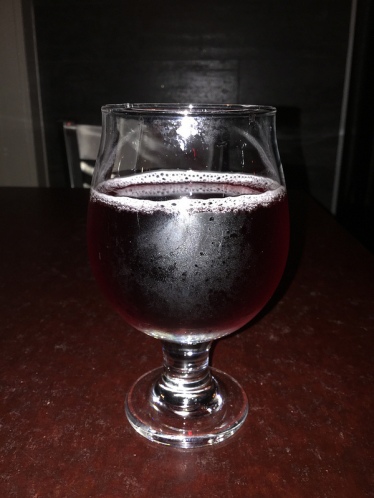 Still, the man in the Jurassic Park jacket is nice enough when he tells me he’s drinking Locust Cidery’s, Smoked Blueberry cider.

A cider! Well, this is exciting; I don’t think I’ve had a cider to talk about on the blog in a long, long time.

The first thing I notice is that it’s a beautiful color. Purple yet translucent, it gives me the impression I’m drinking a beverage of royalty.

The blueberries are prominent too, giving this cider a bit of tartness that it wouldn’t have. It’s just sweet enough that the tartness is a nice balance and the finish is pleasantly dry, but I don’t really pick up a lot of smoke from it.

Until I get about a third of the way down; then I detect a little smoke. It drifts in after the sensation of dryness, slowly building on previous sips of the cider. It’s an interesting note of complexity for a beverage like this-I generally consider ciders to be a bit fragile in terms of their flavor profile; easily influenced but very easy to overwhelm and do poorly.

And smoke, as a flavor, is frequently so dominant I only see it in beverages that have enough malt backbone to stand up to it.

This is a drink that is rare in my experience; it has enough smoke for me to detect it, but not so much that it blows everything else out. Very well done and worth having another.