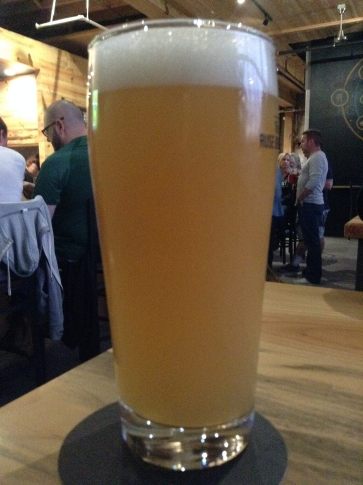 I have come to check out the new Ruse brewing location with my buddy Daniel and he’s ordered the 4th Kind, a NE style oatmeal IPA. Nose has a softer grapefruit scent, with a lush mouthfeel on this beer, likely brought about by the oatmeal. It’s not especially complex but it is tasty and not too harsh on the finish. Plus, the additional body from the oatmeal gives me a little more to chew on than the average.

My friend has recently found his job severely downsized and as a result, is home quite frequently. I’ve invited him to Ruse to get him out of the house and treat him a beer. Ten years ago, in the last big recession, I found myself unemployed too and a lot of people were kind to me during that year. I like to pay that forward when I can.

There are a lot of dogs here tonight; big, shaggy, friendly pooches who are really hoping that people will stop talking to each other or watching the football game and instead pet them a bunch. This is one of the reasons I like dogs so much; they just want you to pay some attention to them and even though they don’t understand why you aren’t, they still want to stick around so you will pay attention to them, eventually.

One dog has resigned himself to laying down in the shadow under the bar, and his friend is poking her nose into the hips of the occasional passerby, “are YOU going to pet me?” A third is standing, looking at everyone, trying to get a feel for the crowd.

It’s a nice little place with some good beer and it’s nice to catch up with Daniel, who’s been spending some of his extra time making art. “I haven’t sat on the couch and just played videogames all day even once!” he tells me and we agree that it’s one thing to blow off a day and have fun when you’re ignoring responsibilities and another when your responsibilities are on hiatus.