We’re almost done with this.

River City Brewing-River City Red: despite the substantial head on this beer, it’s remarkably light on the nose. There’s a pleasant sweetness to it, more caramel than roasted quality, but it isn’t that powerful. The flavor is actually similar: It’s rubbing shoulders with some roasted quality but nothing too dominant. The finishing bitterness matches as well. It exists, you know it, but it doesn’t wipe out the rest of the beer. Makes for a pretty solid red ale. I’d drink another. 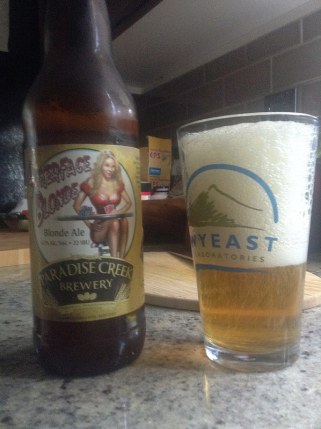 Paradise Creek-Pokerface Blonde: the bottle opens with a crack so sharp it could come out of a movie. The head on this takes up two thirds of the glass and smells like sourdough bread rising. It’s not too sharp but it’s there. The blonde doesn’t have any of that sourness though: it’s sweet and sparkles on the finish to try and clean up as best it can. The overcarbonated head is a knock but it’s not a bad beer.
Unita-Cockeyed Copper, Barleywine barrel aged: it’s definitely got a creamy, malty undercurrent to the nose, which is full on bourbon. It’s a little overpowering, so I approached the beer with a little trepidation, unsure if everything would just be overrun by the bourbon. It isn’t, thankfully: there’s a respectable smokey malt flavor happening to give some depth to the body of the beer. The bourbon flavor isn’t shy, though and makes sure to tie the whole beer together. I dig.