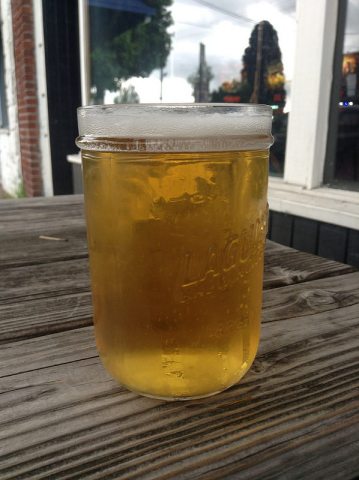 The is the Everybody’s Brewing Green Ice Pils, and it is the last beer I’ll have at O’Malley’s, a favorite local pub.

Which is sad. The beer is the beer; it isn’t too pleasing, as it’s got a lingering unpleasant bitterness on the finish and only the barest of malt in the nose to speak of. It was one of the few choices still available, though, as many of the other beers had been tapped out the night before.

But this local pub is being sold- to whom, the information is currently unclear-so it’s hard for me to see this as a good thing.

Well, the good news is that my area is on the upswing, right?

It’s pretty clear that things are becoming more homogenized and less interesting as a result. O’Malley’s was a fantastic local with good food, supporting the local art scene, an interesting tap list and a very pleasant vibe. It could get loud and rambunctious and have rock shows or DJs but it also could just be a mellow spot to drink and hang out.

I brought dates here, friends here, my Dad when he visited, because it was the kind of place you could bring anyone and have it be a good environment.

Now it’s probably going to become corporate-safe and the neighborhood is going to be lesser for that. Inside, the tables are all crowded; nobody bothered to reset the place from the rock show last night so there’s still a spot cordoned off for band gear, and there is even a family inside-the little girl is maybe four-here to celebrate the last day. A group of women going some kind of deep dive planning meeting near me. Barflies on the rail. It’s active, but subdued. We all know this is it.

I hope this is a good ending for those involved with the day to day actions of O’Malley’s, as it’s a sadder one for the rest of us. I’d rather be pleased for those who work here and their futures than dwell on the loss.

I look across the street and see a new tattoo shop opening. Sure, it was a tattoo parlor before but now it’s new! Maybe I’m worried about nothing.

One thought on “Sigh”