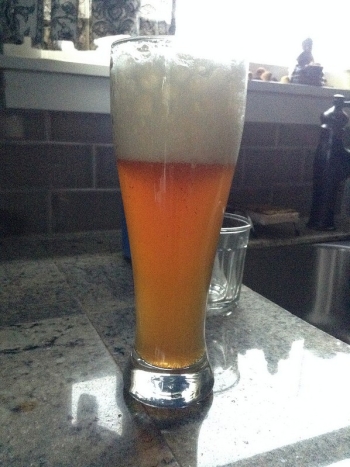 Every homebrewer I know has been asked this question at some point: Ever made a beer with marijuana?

The answer is almost always ‘no’. There’s the obvious problem: legality, but there is another. It’s cost prohibitive: two ounces of hops for five gallons, the minimum I’d want for a pale ale, would probably run over $200.

So you really gotta ‘know a guy’ if you will. And before marijuana became legalized in Oregon, you really had to know a guy.

Well, now that it’s legal, turns out I know someone and they wanted to know what would happen with marijuana they’d grown used in an ale.

So, here it is: the Pale Blue Dream.

The nose isn’t subtle at all. It smells like the strain of marijuana we used; it’s extremely earthy, but also gives the sense of something very dry, like dried out pine. Which is really weird, because I’m sniffing a liquid.

The flavors are a bit muted, thankfully. Having to drink what I smelled might be a little challenging, the scent being so harsh in my nostrils.

The flavors are mellower though. The sweetness from the malt shows up in front of the beer, providing a small amount of counterbalance. The dry, earthy scent from earlier appears on the finish but it’s quickly swept away by the lively effervescence. That earthy flavor comes back but without all the harsh qualities, and gives the beer a more mellow, drinkable quality.

It’s worth trying again, but I think I’d like to up the malt character a bit.