I have stopped at the Roadside Attraction on my way to somewhere else. It’s nearly empty inside, to my surprise, but there’s a man at the rail so I sit next to him and ask him what he’s drinking. 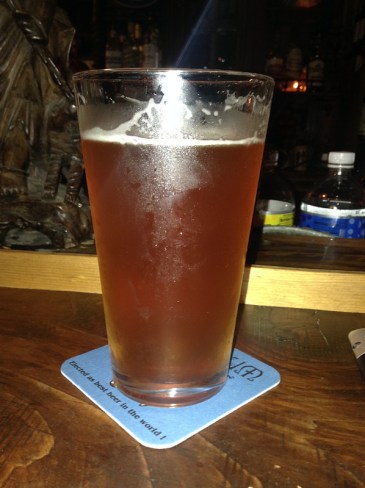 And that’s how I ended up with Ninkasi‘s Dawn of the Red.

The gentleman next to me is Mark; he’s come to the Roadside Attraction because his favorite bar recently closed, and he’s been trying to find a substitute bar since. It’s difficult, he tells me, because most places are too loud-especially sports bars.

I talk to him about exploring new places, because of this blog’s current theme.

The conversation turns to travel and Mark tells me he’s a amateur photographer who recently took trips based on a nuclear theme: visiting Nevada, seeing Trinity in New Mexico (site of the first nuclear bomb test), and a decommissioned base north of Atlanta where they did tests for nuclear-powered bombers.

He wants to collect the theme and publish the photos, maybe online, maybe as a tiny magazine.

Which is awesome. America, I reply, is a pretty amazing country and more Americans would do good to see more of it.

Soon, the clock reminds me that I have to go. I thank Mark for his time, finish my ale and head on my way. I never even had time to write about the beer (which I liked).

Sometimes talking to strangers lets me see more America, and when I can’t get out to see America, sometimes America comes around to see me, if I just get out a little bit.