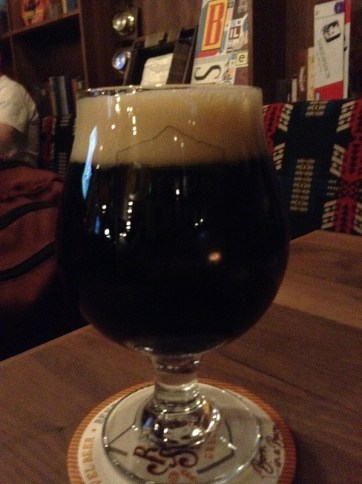 In a fortunate series of events, I was able to meet with a pal for this post, and she has chosen the Seasons of Insanity CDA by Left Hand brewing.

I have to say: this was a very good pick. I usually hate CDAs because they just aren’t done very well. It’s a difficult style to execute and it frequently leans hard on coffee flavors, usually acrid, burnt ones. This has a nice hoppy nose, though, with no roast astringency and a fine hop bitterness. It’s a stunner, not unlike drinking blonde stouts, to have a beer that has the visual qualities of a stout but the scent and flavor qualities of an IPA. Well done, Left Hand.

We’re trying to do the visiting thing but the visiting thing is interrupted often by Carl, a small dog with a smooshed face and big ears, who is certain there is something in her bag for him. She has a loaf of bread with her and we’re informed by the barkeeper that Carl has a thing for bread. Carl got a lot of scratches behind his perky ears but alas for him, no bread.

There are worse things than being distracted by a pub dog. There used to be a pub cat at the Slingshot who was just great. She would jump on the seat, never the table, get her head scratched and, if she thought you were worthy, curl up next to you. You could pay attention to her or not.

This week’s second pint goes to the Collective PAC.