I didn’t just drink cider in Spokane: I also got to check out some Washington ales that I don’t have access to in Portland. Let’s get to the notes!

Harmon‘s Pt Defiance IPA: It tastes like burnt caramel. Wow. I have a mouthful of regret and bitterness. It’s both sickly sweet and unbearable. If you ever needed a reason to not do this to yourself, take it. 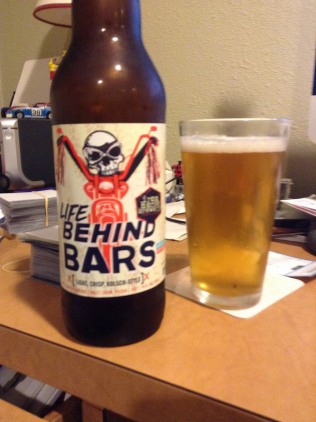 Iron Horse‘s Life Behind Bars kolsch: bread dough nose; really yeasty and pungent, but in a pleasant way. It’s a little bit like sourdough and buttered popcorn. The flavors are also very much like raw bread, giving me something to chew on, absent a sour note. I think I may have found a beer that gives Old Town’s kolsch a little bit of a run! It doesn’t finish quite as cleanly but it is a damn fine beer.

Juice Box IPA from Tricksters Brewing Co. A Coeur d’Alene brewery! The bottle claims a NW IPA style-and the nose is certainly dank enough for it-but the clarity is all NEIPA. The flavors match the nose more than the visuals, thankfully. Yeah, it’s sweeter than your typical NW IPA, but a little malt helps the foresty-bitter characters smooth out in the long run. I like this beer: it’s got some interesting flavors happening but is still pretty drinkable.

Tenpin; Groove pineapple wheat. This really does have a strong pineapple flavor. However, it’s less like raw pineapple and more like it’s been roasted on a grill. I imagine that it’s because of the malt aspect, played up in a caramelized way. It’s a good beer but it’s definitely unusual and unexpected. But if caramelized pineapple sounds like your jam, you should absolutely have this.

Hale‘s Aftermath IPA-nose pushes some of that forest dank scent, wet needles, but doesn’t push it very hard. The flavors kick up a little roast in the middle which is unexpected, followed by a more traditional sweetness, and then the kind of bitterness I’d expect from a more piney IPA. No grapefruit tart or pithy bitter quality. It’s a pretty straightforward IPA but I can’t fault it for that. It’s tasty and solid.