In the Portland brewing scene, there are a lot of brewers with the surname Ben and….well any excuse to throw a party, right? Thus: Benfest-a festival with beers mostly made by people named Ben, or in honor of, as this year also saw the passing of Ben Flerchinger, a loved local brewer and part of the proceeds went to his family to help with the expenses of death.

Sigh. Sorry, folks. Looks like it’s going to a week with more downer feelings than usual.

Gigantic Benmosa; grapefruit, tangerine, pineapple. I’m not sure this is even beer, so much as a fruit drink that might have alcohol in it. Even the bitterness on the finish is heavily reminiscent of the pith of grapefruit. I don’t think it’s for me-that pith note isn’t something that I like. But it’s definitely what it says it is! And if you like mimosas, you should give this a go.

Breakside First Blanche; witber. This beer feels soft on my palate. Almost like a hug. It’s also very straightforward; little wheat malt in the nose, a dollop of tartness on the finish. I’m more into this one.
Gigantic/Sasquach collab, Been There Freshed That; fresh hop pale. Smells like band aid. Tastes similar. Pass. 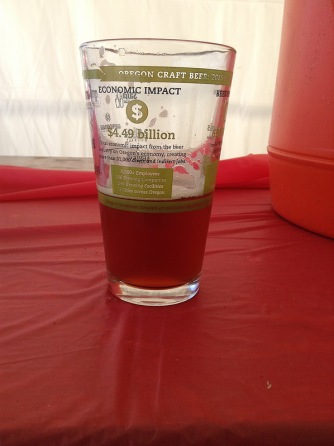 Coin Toss Benvention; Imperial mild. Milds are very difficult for me to tell you about. Like brown ales, their strength is in their forgettable qualities. There’s just enough malt happening here that I have something to chew on. It’s 5.2% ABV, which I don’t object to, but why not just call this an ESB? Probably because I don’t know enough about styles to say. But sit me down with a pitcher of this and a plate of nachos and I’m a happy camper.
Lucky Lab Benedict Palmer; lager with lemon and ice tea. Nose of sulphur. That makes my face wrinkle. There’s a corn note after that and this doesn’t unwrinkle me. The flavor has some corn and lemon in there, but they do not mesh well.
Three Creeks Stampede Strong ale; American strong. I cannot pick up anything on the nose to save my life. However the beer hits my tongue softly, gives me a nice roasted flavor, followed up by some sweetness. The Stampede also has a pleasant heft to it; the beer might hit the tongue softly but it rolls around with a little weight. That sets up the finishing hop bitterness and just a tiny pop of effervescence to end. The Stampede Strong makes me want to sit with some buttered popcorn in a movie theater. I feel like that would be a great environment with a pretty nice salty offset to the beer.
Laurelwood Ben There Done That; Kolsh. OK, so my current stance is: Old Town’s Kolsch > everyone else’s, which is why I wanted to give Laurelwood’s offering a shot.
Old Town is still safe. The nose on this Kolsch has that lager old hop nose that isn’t so awesome. However, after that? There’s a really pleasant beer to drink. It’s sweet, with a nice rounding effervescent pop around the sides of my tongue that I’m enjoying. It’s definitely solid, even if it doesn’t take the crown.
Deschutes BlENded; saison. Now this is a nose that pops up like a jack in the box. Spicey, a little funk and a little fruit in there. This beer is…a touch unusual. Mostly saison. That is: wheat malt, Belgian yeast spice note, but the finish is fruity and sparkly, like grapefruit champagne. I find this beer really interesting and very quaffable. Have at it. 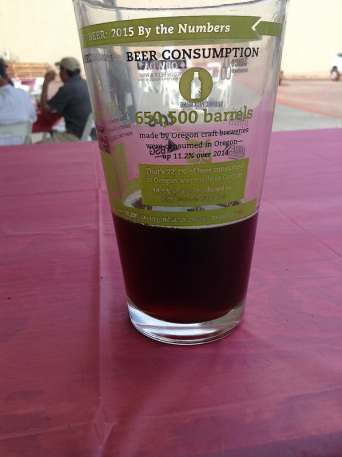 Gigantic Macallan Barrel aged barleywine, pic. Oooooo boy. This is basically alcoholic, unsulfured molasses. Brown sugar syrup that will give you a buzz. It is REALLY good. It is also a beer to have one of, and a small pour at that, because at 15% it’s more dominating than Michael Jordan.

54-40 Half Cocked; IPA in the cask with Citra hops. The nose is ALL Citra, with sweet orange and lemon scents. There’s also just a little nudge of cut grass in there, too. The beer itself: solid. the nose is amazing, the liquid is very good but I almost want a more carbonated version so that it finished with some pop. However, the body of the beer has a solid malt adding a nice sweetness and hint of grain before the hop bitterness, which isn’t very intense at all, sweeps in to round it all out.

Ecliptic Benith; Grapefruit Gose. Wow, this nose is just a nice confluence of sour and salt and fruit. My first sip has me exclaim because of its tartness in comparison to all the other beers I have had today. That isn’t to suggest it’s bad, though. Just the opposite; the tartness is on point and the finish is dry like white wine. The contrast that this beer provides from the other styles here is more than welcome and I have to say, this might be the first Ecliptic beer I can endorse.