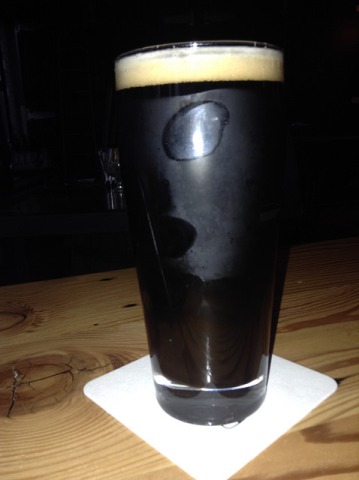 Modern Times’ City of the Dead seemed interesting so I got it: an export stout with bourbon barrel aged coffee beans. Which is weird; the beans are aged in bourbon barrels? That’s a new one on me, if it’s true. (And I found out later from the barkeep that it was indeed true)!

It’s a liquid espresso bean, though. Really smooth, a little roasted, wrapped in sweetness. I like it and I would definitely recommend it to anyone who enjoys coffee flavors in their beer. It’s also got just the right amount of viscosity to it, too: this beer slides over my tongue easily and leaves just a little bit behind, but it isn’t weighing me down.

In contrast, the summer is laying a heavy hand on the nation; wildfires and floods dominating the consciousness, edging out the corruption only by virtue of the immediate suffering that they cause. I wipe ash off of my car Wednesday morning, labored breathing throughout my day; citizens of Texas gasp because there is too much water in the air.

Yet the spirit of e pluribus unum lives on, in the groundswell of support for people who are in crisis. The shaming of those who could be of assistance and think they are above doing so. The attention towards our impact on the climate, on each other.

In a year that has been wrought with despair, that is something I want to remember: not just so that I can recall that Americans came together to help, as we so often do for each other, but because it a task for us: to continue to assist with the rebuild. This is something we should rightly ask our government to do correctly and I think we’re going to have to demand it, hold people accountable for it. Because they’ve told us: they don’t care.

So it’s on us to hold up the principles of this country. As Mr. Biden said:

Today’s second pint goes to Portlight but I would encourage readers look over any number of charities helping people affected by hurricane Harvey and find one that speaks to them.