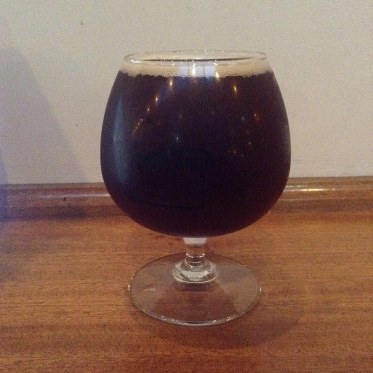 I had the Laurelwood Cookie Monster ale back at Bailey’s 10th anniversary event. The beer describes itself as an English strong ale with oats, cacao nibs, sea salt and vanilla, barrel aged in bourbon barrels. What I said about the beer-which comes in at a hefty 9.4%-was that it tastes like raw chocolate chip cookie dough.

Sipping on one now, I can see that my assessment was entirely correct. There’s a tiny blanket of effervescence here, which might be the only thing keeping the Cookie Monster from being too sweet, followed by a stamp of bourbon but all in all, I still like it. If alcoholic raw cookie dough appeals to you, I think you’ll probably like it, too.

Yeah, this week I went for something I knew I was going to like. I don’t know about you but I feel worn down by the events of the week and I live about as far away from Charlottesville as you can.

But when someone tries to tell you “Nazis are the same as these people who don’t like Nazis”, well…I think it’s a good time to dig in and start saying very loudly that they aren’t, and maybe those people need to be exposed, shunned, shamed and punished so they quit infecting our body politic.

Every conversation has gone like that-or like this-lately. Which is hard on the psyche-and again, I’m not even near the epicenter of this latest disturbance. I just feel the shockwaves.

All the more reason, though, to treat yourself. Not to retreat entirely to comforting, familiar things but sometimes? Yeah, it’s a good thing to just enjoy a beer and take yourself off the wall.

An opportunity to recharge our sense of compassion and our sense of humor, so that we do not become the vindictive, bitter, callous people who currently have the Matrix of Leadership.

But having the Matrix and being the leader are two very, very different things and rarely has this ever been clearer in my life than now.