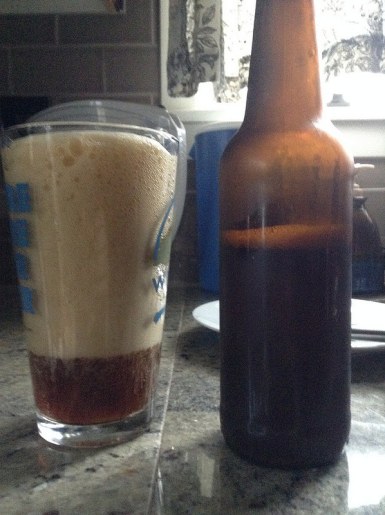 It begins! Long time readers of the blog might remember that last year, I tried making pale ales (every other batch, to be precise) in order to find and properly execute a recipe that I liked.

It was a good experience, and there will be more opportunities to make pales ales but this year, I’m changing to brown ales. Brown ales come in two major categories: English and American. I can’t say I have a favored style at the moment, I just know that the commercial versions of this style that I’ve had, I’ve liked. But they appear infrequently so it’s time to brew my own.

There’s a dark malt note in the nose (when I get to it) that isn’t flawed but…it feels incorrect.

Which is not a bad description for the beer at large. It’s drinkable, yes, but there’s also a molasses flavor, both sweet and sulfur, that is far, far too strong for the kind of beer I was aiming for.

As with my last beer, B#1 suffers from staying a little too long in the bottle. It doesn’t taste infected though, so whatever bonuses I can take from that, I will.

Forgot to get FG readings and…so I don’ t know how strong this beer is. That is too bad, as it could’ve told me some information but I think next time, I maybe have to leave out the roast barley.