While the OBC’s Fall Classic homebrewing competition was the biggest beer event for me this weekend (I was head steward, and I’ll talk about that more later this week) the biggest beer event in Portland is the 40th anniversary of the Horse Brass. So, despite a soreness in my legs two days after the Fall Classic, I have come to what might be the most important beer bar in the city to pay my respects. This is especially cool because for their 40th anniversary, the staff at the Horse Brass collaborated with local brewers to make beers for the occasion. 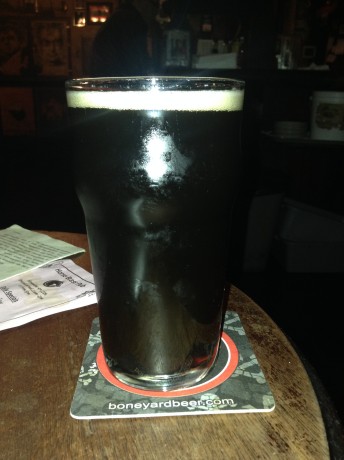 So I chose Rosenstadt Brewing (with Anthony, the cook)’s Nebel-mond,  Baltic Porter. Seems a little boozy in the nose but there are some very nice roast flavors in there: coffee and, interestingly enough, toast. It’s a really light beer on the palate as well. The coffee/toast flavors linger though not in a negative fashion, however what I mean here is about the density of the Nebel-mond. It would be a mistake to pound this beer but it’s absolutely doable, because of the viscosity.

I think there might be a tiny undercurrent of dried fruit there on top of it all. Really interesting stuffl

This is the third beer I’ve had from Rosenstadt and I have to say, I’ve been pleased or impressed with all of them. Note to self: find out where they are and go to that brewery, if possible.

While there isn’t much about the Horse Brass that I can say that hasn’t been said, I will, for new readers, provide a summary:

In the 1980s, when craft beer was still a gleam in the eye of Californians, it was the Horse Brass in Portland bringing in beers from all over the world and inspiring people in Portland-and Oregon-to maybe give this beer thing a shot. It likely wasn’t the only bar but it certainly has had one of the biggest impacts, as I am told founders of Widmer, Lompoc and others, some not as fortunate to survive into the present day, had their initial planning meetings here.

So the Horse Brass is a pretty big deal and, I feel, a rarity. A beloved institution that has not only lasted but continues to do the things that made them great; providing interesting beers, quintessential pub food, and the kind of atmosphere conspirators need.

In a city that is often struggling to keep it’s iconic places, I have high hopes that the Horse Brass will continue to do what it’s doing for a good while, yet.