Author’s note: I wrote this Saturday afternoon. My day proceeded to get considerably worse. The underlying message, though, that perspective is important, is a good one.

I was in a card tournament today and I went 1-3.

Now, I had fun and I managed to leave the event in pretty good spirits. But I still lost pretty badly and in the time honored tradition of losing, I have come to NWIPA for a Knee Deep IIPA. Has some earthy, fruity nose and then a steady citrus bitterness on the finish. It’s a bit sweet, which is good, because that keeps the whole beer from running off the rails. So far, I approve.

Although, is this a time honored tradition? I don’t know who or what informed me that this was the thing to do: go to a bar after a failure, sit down, softly imbibe a beer and let all the sorrows that come with losses just bleed out, as my stomach gets a little warmer.

“Singing the anthem for all of the quitters you know, because they won’t disappear when you vanish tomorrow” – Primitive Weapons 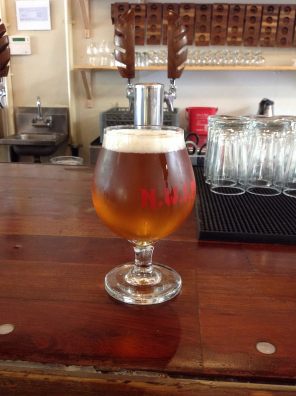 What cultural story put me here? It feels like a cliche and it almost certainly is, the image in my head from a thousand movies or books I’ve never even seen, bringing me to drink alone at a bar. A million poems or songs I’ve never heard, about trying to re-square my shoulders after a day of getting beaten down.

There’s a woman on the rail wearing a perfume that’s messing with my enjoyment of this beer. Something that reminds me of wood decaying on the beach. It’s not unpleasant so much as it is too strong. But perhaps she’s wearing it as a defense to the aura of failure that I have brought with me.

I recognize this, of course. In my head, one failure = a million failures = all the failures. And that isn’t what happened. I had a pretty solid day where my intentions did not work out. The consequence of this? I get to sit down and have a beer.

It’s important to keep things in perspective. I’m going to go home, make some dinner and most likely throw myself at writing again. As destinies for a night go, that’s not bad. The creeping notices of failure that want to shadow a perfectly good day? They can fuck off for now. My beer is good and tasty food awaits.

Let’s take what is given, for it is enough.