Whenever I can find beer in cans to try for the blog, I always like doing so and checking out Worthy’s IPA is probably long overdue. I always see this beer but I never, for some reason, consider it…until now. (Cue ominous music. CUE MUSIC I SAID).

I pick up resin and pine in the nose. It’s not overwhelming and it isn’t long lasting either but it helps set the stage. That’s a good thing, as it helps make the beer more accessible to people, I think. Also, it isn’t grapefruit, thank you so much. 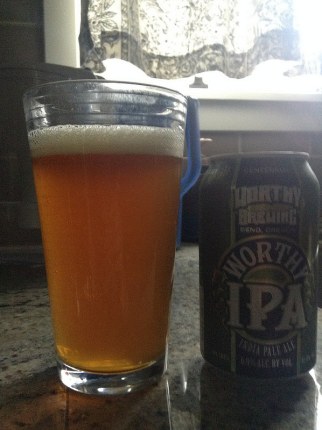 The back end of Worthy’s beer is bitter but not scouring; I could still taste something else when the beer is done and that’s a good quality for a commercial IPA.

There is a sweetness in the middle that becomes a little more pronounced about halfway through the beer. I’m not sure if that’s because the nose is fading or I’m used to the bitterness in the finish. That middle is almost peach-like; or some kind of ripe stone fruit. It’s a positive quality to pick up in the midrange and helps improve the beer’s drinkable qualities but it’s also subtle and doesn’t interfere with the resin notes on the front and back end.

I’d say this is a recommended beer.