As sour ales become a bigger and bigger deal, I found this article on how they’re improving and developing the fermentation process for sour ales to be pretty interesting.

I was in Nevada at the end of March to help my Dad move to Washington, so of course I went ale hunting. Moving sucks: might as well find some beer, right? As always, here are the mildly edited notes: 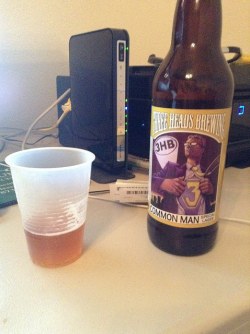 Three Heads: Common Man lager-a great malted beer but I practically don’t care because I figured out how to open a beer without an opener. See, my Dad took off for awhile and I was left in an apartment alone without any access to a tool that would open a beer. That is a massive problem! It took a couple searches on the internet, more than a few false starts and definitely some creative repurposing of existing items but! I got the damn thing open. It could’ve been a Budweiser and I still would’ve felt proud.

The beer itself lacks any bite, so the sweetness might be a little much for some people but I was ready for some serious  pub food.

Tenaya Creek: Bonanza Brown- this is a solid ale and it’s got enough chocolate malt to give it some heft but is light on the palate and easy to drink.

The next day I had Mother Earth’s imperial stout and it was pretty good. But that was moving day, so I don’t remember a lot. After long days, the caveman brain kicks in heavy: this beer good. Drink some. 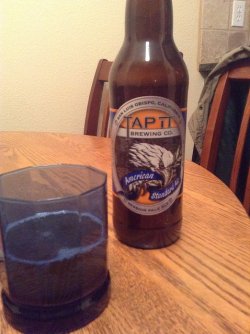 Tap It: American Standard Ale-session pale. Smells like a cross between Belgian tripel and wet paper. I was not terribly hopeful and the beer followed through. The texture is wet paperlike and the flavor is off. Did this go bad or is there an actual Belgian yeast involved? I don’t know but it’s not good.

This was, unfortunately the first beer I had after 23 hours of driving in two days and…well, no. By now I’m in Washington though, so my beer selection changed.

Modern Times: Lost Horizon (edit, thanks to my friend who saw this error)-Caramel nose, citrus finish, like it. I liked it a lot. So much that I considered going back for more right away.

Iron Horse: Hopkreig IPA- medicinal smell and the bitterness contains that band-aid plasticy thing, too. This is the first beer I’ve had from them that I truly thought went awry but it goes awry in a big, big way.

Bale Breaker: Field 41 pale- This is a really nice pale. The nose has a pine tilt but it isn’t overwhelming, the bitterness on the finish says “hello-goodbye” as the effervescence clears it away. I would like another, please.

Selkirk Abbey: Saint Augustine Rye saison ale-Belgian funky nose which I was not thrilled with and my concern meter began to rise. The beer is light and crisp though. It’s a bit sweeter on the saison flavor, not funky or beligany-sweet. It’s dry, which I like. Overall, a win here.

This is the philosophy I go to bars for. I’m tempted to just let this post stand on that overheard. But instead, let me start over…

“Neon lights do amazing things to cover up blemishes in strip clubs” the bartender tells me, “that’s why there is no natural lighting there.”

She’s a smiling, bespecled, barrel chested blonde who’s got a jill of all trades vibe, explaining to me why she reacted so startled to my presence: Apparently I looked like someone who had been 86’d. She looks like the kind of lady who could easily kick me out of here, then turn around to the rest of the bar, crack a joke at my expense, everyone would “huzza” and everything would go back to normal. The cantina scene without aliens.

I get Breakside’s Lunch Break: I don’t know anything about this beer but the nose (pine but not pungent), the color and the finish (very clean) suggest it’s one of those session IPAs. This beer isn’t going to convince me that session IPAs should be a thing-nothing will-but it’s not a bad beer. I’d recommend it.

This is a strange place. I think there are more tv and video screens then there are people right now. And this place isn’t deserted: There’s pool players and video poker players and even a couple run-of-the-mill drinkers.

Which tells me something, too. It’s almost certainly a neighborhood bar that’s adapted to the times: the beer list is reasonably broad, the bottle selection includes ciders alongside jello shots, air hockey, dartboard, and a very modest wall of spirits, every other empty space filled with neon signs.

The age range is reasonably wide too. All in all I’d probably come back to have another drink.

The grapefruit is starting to light up the finish of my beer. I’m not so happy about that: there isn’t enough backbone to this beer to really let the grapefruit be a satisfying flavor for me. I think I’ll have another beer, though.